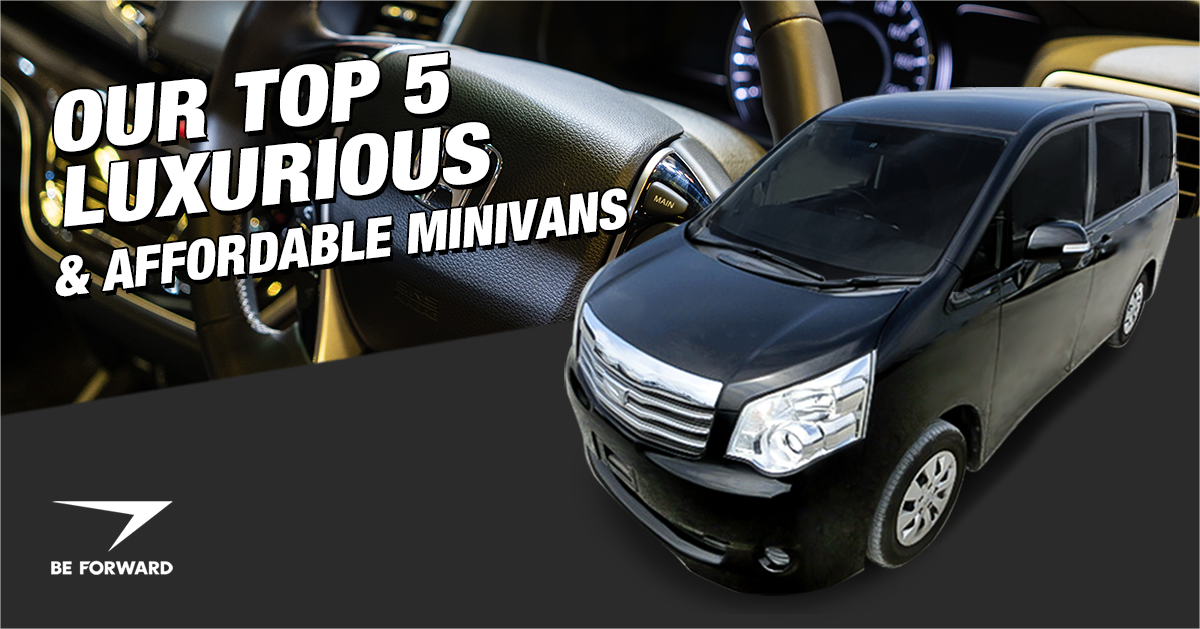 Many of the top rated minivans are ripe with the same luxuries and technology that you will find in the highest priced SUVs, but the average price tag is considerably lower. The lower sticker price masks the many advantages of owning a luxury minivan. First and foremost among those advantages is that today’s minivans have earned the highest ratings from vehicle safety agencies around the world. Every parent wants to know that the safety of their children is well looked after during a trip.

Second, a minivan can offer seating for up to eight passengers, so you may not need another vehicle until your children are fully grown. Thirdly, a minivan offers a more car-like driving experience than an SUV, making it easier to drive in congested traffic and to maneuver in crowded parking areas. Lastly, a minivan offers better fuel economy than any full-size SUV on the market today. With all of those advantages in mind, let’s have a look at five top rated luxury minivans.

Which Minivans Have the Best Fuel Economy and Features?

How well do these five minivans compare in terms of fuel economy, price, and key features? 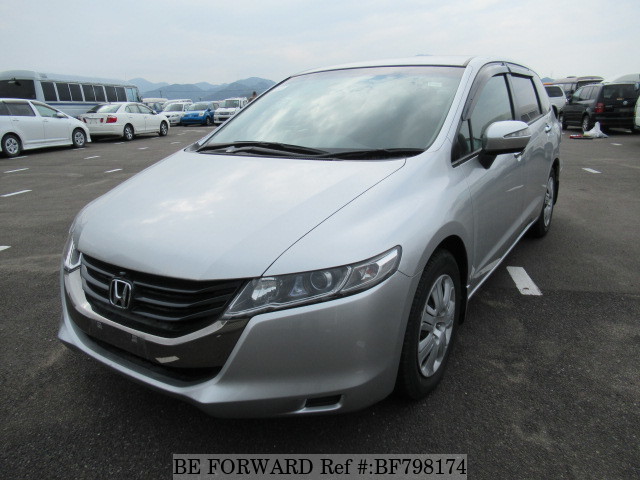 The Honda Odyssey is sold in every global market and is one of the top selling luxury minivans in each. The Odyssey offers great styling, a strong engine line-up, and is backed by the legendary durability of the Honda name. The Honda Odyssey is in its fifth generation, but most of the models available for export are from the third and fourth generations. The engines available in those generations include two petrol I4 powerplants. The third generation is powered by a 2,398 cc I4 offering 158 bhp or 197 bhp depending on the model year purchased. 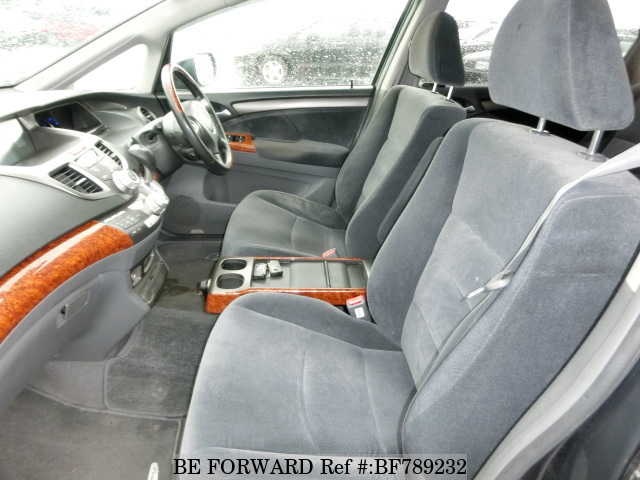 Above: Interior of a used 2008 Honda Odyssey

The fourth generation Honda Odyssey is powered by a 2,354 cc I4 that is capable of 166 bhp and 218 N-m of torque. Gearbox selections for both generations include a five-speed automatic and a CVT. In addition to solid long-term engine and gearbox performance, a Honda Odyssey can be equipped with an advanced navigation system, a rear-seat entertainment system, parking sensors, a lane departure warning system, and blind spot monitoring depending on the year and trim level purchased. Also, the Odyssey is capable of 10.6 km/l on the highway. 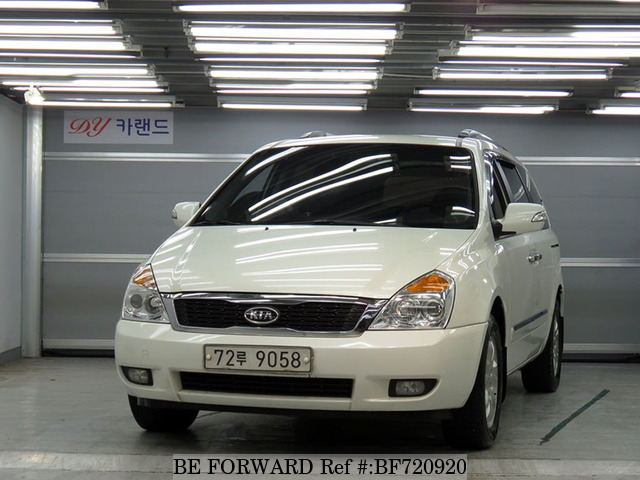 The Kia Carnival, known as the Kia Sedona in some markets, is a great alternative to the luxury minivans built by Honda and Toyota. It offers outstanding styling coupled with a lower price and a higher feature content. The Carnival is now in its third generation, but the majority of the units on the used car market are from the second generation, so we will concentrate on those. Under the bonnet, the Carnival uses five engines: three V6 petrols and two diesel I4s. The most common petrol powerplant is a 2,656 cc unit that is capable of 194 bhp and 249 N-m of torque. The diesel engine that you are most apt to find is a 2,902 cc common rail turbo I4 that offers 189 bhp. 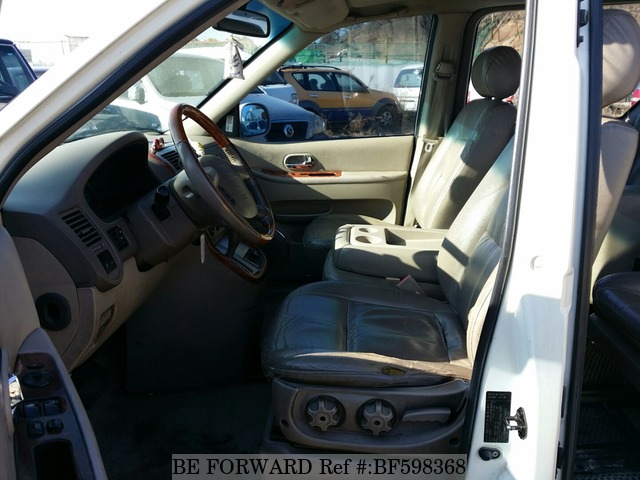 Above: Interior of a used 2005 Kia Carnival

A five-speed automatic gearbox is common, but the Carnival can be found with a six-speed automatic or a five-speed manual. The fuel economy of the V6 equipped Carnival is a tad less than that of the Honda Odyssey, but it scores bonus points for quick acceleration and an extremely quiet ride. Depending on the trim level and model year that you purchase, you can find a Kia Carnival equipped with automatic emergency braking, adaptive xenon headlights, an acoustically insulated windshield, adaptive cruise control, forward collision warning and mitigation, a lane departure warning system, and a surround-view camera system. 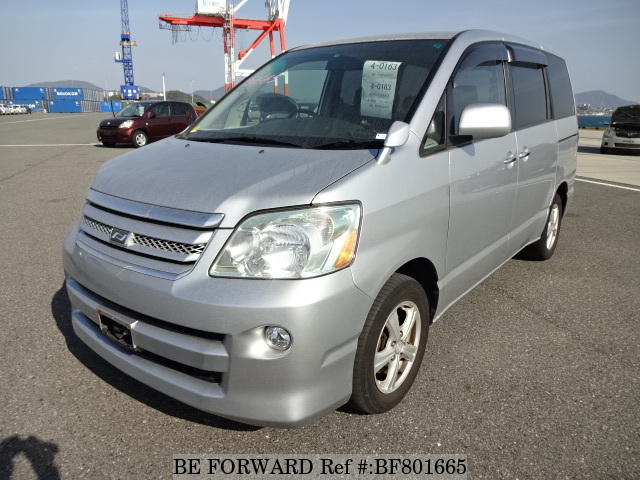 The Toyota Noah, formerly known as the Toyota LiteAce Noah, is the most affordable Toyota minivan available in Africa. The Noah is available as a five, seven, and eight passenger minivan, so it can meet any need you may have. Most of the units available for export are from the first generation. The engine that powers the first generation Noah is a 1,987 cc I4 that is capable of 155 bhp and 195 N-m of torque. 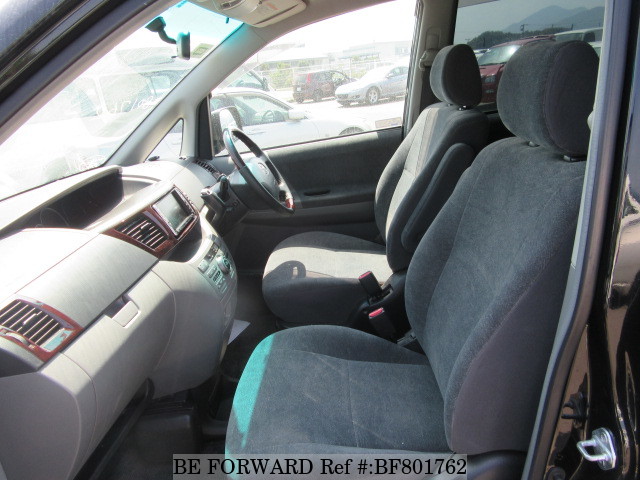 The gearbox can be a four-speed automatic or a CVT. A Toyota Noah can be equipped with a multi-functional steering wheel, traction control system, keyless entry system, cruise control, dual-zone climate control system, rear air conditioning, a rear camera, and the G-Book telematics system. The Toyota Noah can achieve up to 14.8 km/l, making it hard for frugal drivers to pass it by. 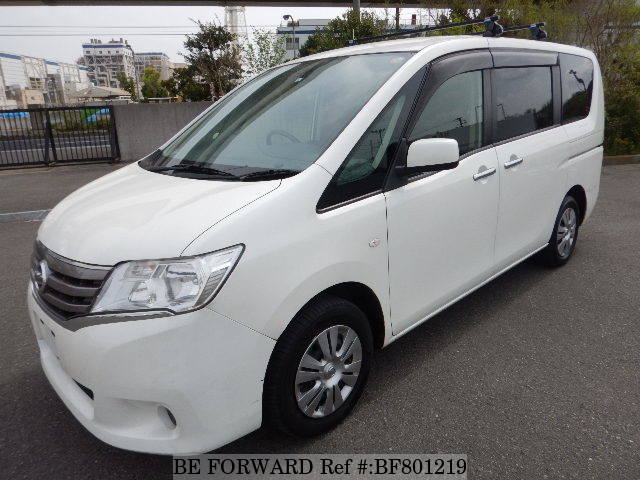 The Nissan Serena has been in constant production since 1991 and is now in its fifth generation. It offers buyers unique styling and a nimble driving experience rarely found in a large family conveyance. The majority of the Serenas currently on the used market are from the third generation, so we will concentrate on the information about that group. 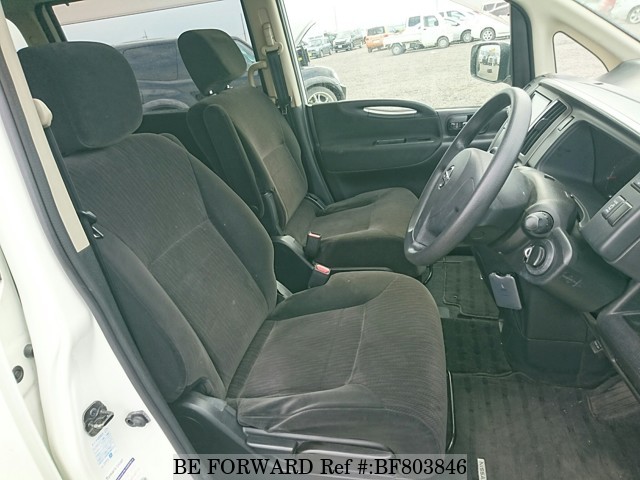 Above: Interior of a used 2009 Nissan Serena

Under the bonnet, the third generation Nissan Serena is powered by a 1997 cc I4 that produces 140 bhp and 193 N-m of torque. The engine is always paired to Nissan’s Xtronic CVT. The appointments of the second generation Nissan Serena can include: traction control system, a six-speaker audio system, keyless entry system, cruise control, rear air conditioning, and a rear-view camera among others. 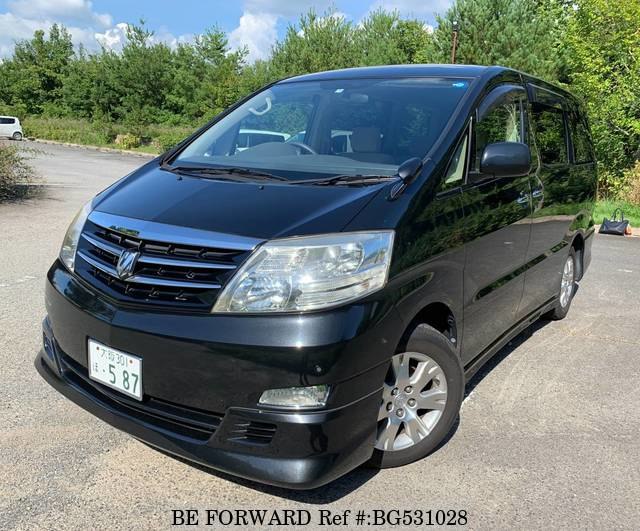 The Toyota Alphard is the largest and most luxurious minivan sold by the legendary automaker. It offers very interesting styling and great lines. The current generation offers every luxury and technology appointment available from Toyota. The Toyota Alphard entered its third generation for the 2015 model year, but the majority of the units on the used market are from the first generation that was built between 2002 and 2008. That generation is powered by two engines. The first is a 2,362 cc I4 capable of 160 bhp and 220 N-m of torque. The other is a 2,994 cc V6 offering up to 194 bhp and 283 N-m of torque. 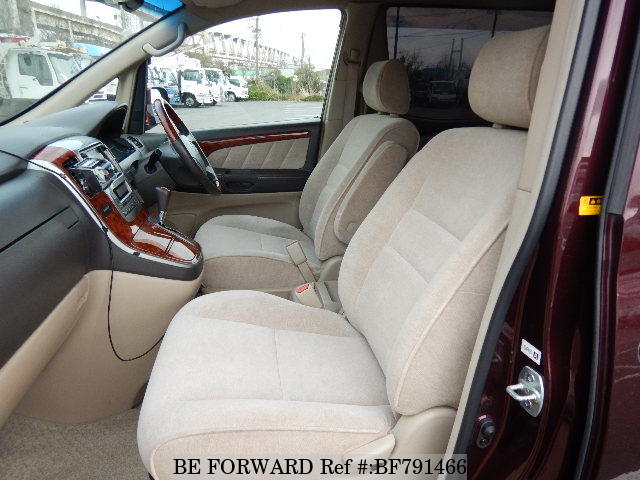 Above: Interior of a used 2003 Toyota Alphard

There are three gearbox options found in the first generation Alphard. They are a four and five-speed automatic or a CVT. Depending on the engine and gearbox pairing, the Toyota Alphard can achieve up to 11 km/l. Depending on the year and trim level, the Toyota Alphard can be equipped with tri-zone automatic climate control, a rearview camera, power-sliding rear doors, xenon headlights, adaptive cruise control, and a forward collision warning system.

If you would prefer a different minivan, BE FORWARD has hundreds in stock at all times. You can browse our entire inventory by clicking the icon below. 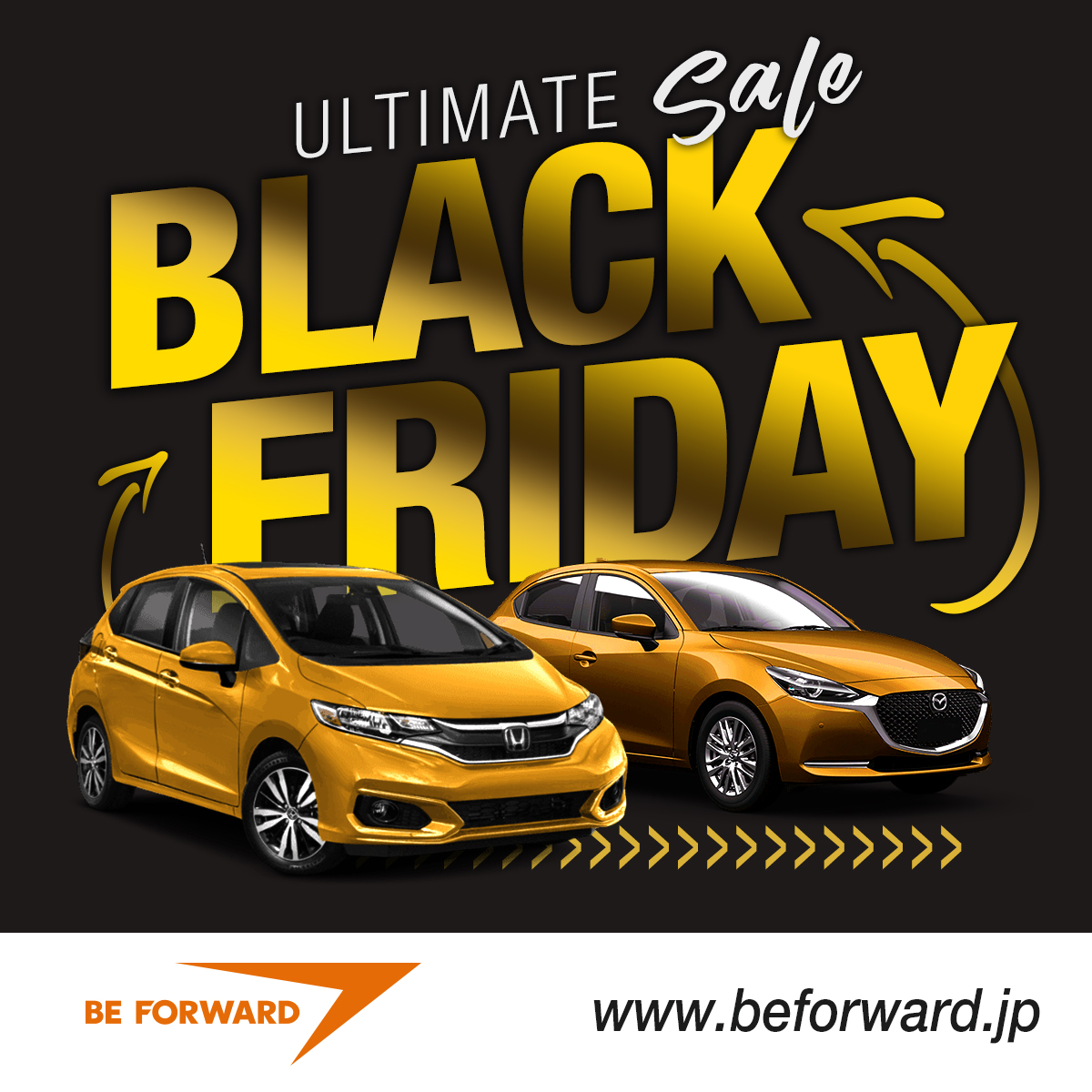