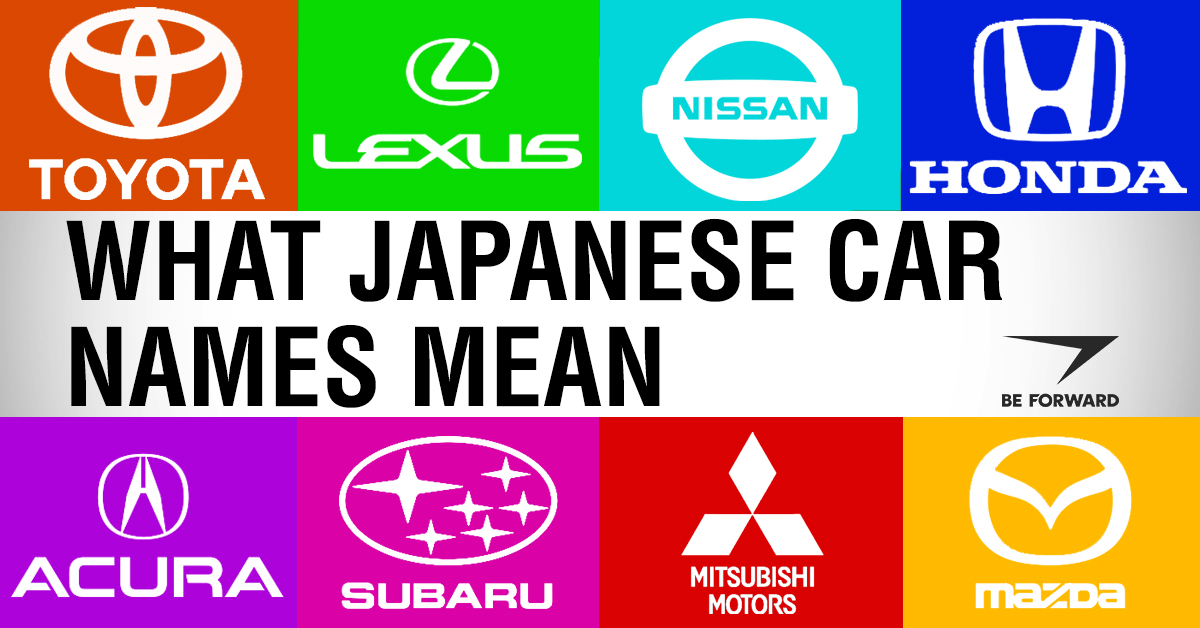 Today, as one of the premier used Japanese car exporters in the country, we thought it would be interesting to talk about Japanese automakers themselves. For example, have you ever wondered how the Japanese say what we know as “Mazda,” or what “Nissan” actually means? Here’s a little Japanese lesson then, centred on popular Japanese automakers.

To start with, realise that the Japanese alphabet, including Kana, Hiragana, Katakana, and Kanji characters, do not convert easily to the modern Latin Alphabet, “a, b, c, d, etc.” Certain vowel sounds are similar when converted to Latin, and their pronunciation is, more or less, as follows: A as in “father,” E as in “every,” I as in “macaroni,” O as in “only,” and U as in “should.” Another way to think about it is this mnemonic “Ah, we should get old,” which orders the vowels A, I, U, E, O. Okay, let’s get started!

Toyota Motor Corporation is Japan’s largest automaker, and was founded by Kiichiro Toyoda, whose surname means “fertile farm field.” The name was eventually changed from Toyoda to Toyota because, in the katakana alphabet, Toyoda トヨダ requires ten strokes to write, and Toyota トヨタ requires eight strokes. In Japanese culture, the number ten 十 signifies a crossroads, or indecision, which wasn’t seen as a good omen for a new automobile company. The number eight 八, on the other hand, is considered good luck, so the company went with the latter spelling.

The English pronunciation, “To-yo-da” isn’t that far off from the actual pronunciation, most likely because of laziness on the part of the speaker, kind of like saying “wader” when in a restaurant, when we really mean “waiter.” In Japanese, just make sure to pronounce the “t” hard in both places, “To-yo-ta.”

Lexus might be strange to the ear, especially since Japanese does not have this sound in their language, so how did it get there? If you recall, Lexus actually didn’t originate in Japan, but was an invention for the North American market, where Lexus vehicles were first destined for marketing. In fact, Lexus didn’t come “home” until 2005.

While Lexus makes no claims as to the origin of its own name, one popular theory holds that Lexus stands for “Luxury export to United States,” and some assert that it is a mashup of the terms “luxury” and “elegance.” Honestly, we prefer the latter. Lexus レクサス, pronounced “Lex-us” in English, is roughly pronounced “Re-ku-sa-su” in Japanese.

Of all the Japanese automakers, aside from those based on their founder’s names, the meaning of “Nissan” is perhaps the simplest of them all. The kanji 日 “ni” means “sun,” which also happens to be the first character in Nihon 日本 “Japan,” which is why we refer to Japan as the land of the rising sun.

Known as the world’s largest manufacturer of motorcycles since 1959, Honda Motor Company also produces automobiles and power equipment for most of the world. Honda is Japan’s second-largest automobile manufacturer, and is named after founder and motorsports enthusiast Soichiro Honda.

Interestingly, we’ve probably been saying, for decades, the name “Honda” with a short “o” as in “bonfire.” The true pronunciation, however is closer to the Spanish word for “deep,” but with a hard “h.” So, say it with us now, “Haun-dah” not “Hahn-duh.”

Similarly, Acura, Honda’s luxury marque, has been mispronounced for decades, at least outside of Japan. Most likely, you’ve heard the name pronounced “Ack-yu-ruh” with a short “a” as in “bat.” In Japan, we pronounce it with a secondary stress on the last syllable “Ah-cyu-rah.”

Another oft-mispronounced name refers to Honda’s in-house performance –products division, Mugen ムゲン. English seems to dictate putting a false “you” in the middle, “Myou-jen,” but totally changes the meaning of the name. Mugen, “Muh-gen” with a hard “g” means “without limits,” while the closest thing to “Myou-jen” in Japanese is a surname, possibly meaning “great god.”

Subaru, typically pronounced “soo-ba-roo,” in English, is pronounced “su-ba-ru,” in Japan. While the English name is derived from the katakana spelling, the actual kanji spelling for Subaru, 昴, refers to the Seven Sisters, or the Pleiades, star cluster.

Indeed, the Subaru logo is based on this star cluster, but why are there only six stars? Japanese tradition only counts six stars in the Subaru constellation.

The Mitsubishi group actually covers a number of companies, one of which is Mitsubishi Motors. A compound Japanese word, “Mitsu” meaning “three” and “bishi” meaning diamonds, is quite literally the description of the Mitsubishi logo, composed of three red diamonds on a white background.

We’ve probably gotten used to saying “mitt-su-be-she,” but referring to the pronunciation guide earlier will help us get rid of that short “i,” because the Japanese pronounce it “meet-su-be-she.”

Mazda Motor Corporation is also based somewhat on a founder’s name, Jujiro Matsuda. The name “Matsuda” literally translates to “field of pines.” When the name was translated to English however, they chose the spelling “Mazda,” which was inspired by the Zoroastrian god of light and wisdom, Ahura Mazda.

Here’s where it gets interesting, though. Mazda, pronounced “Mahz-duh” in English, is also written “Mazda” on corporate logos, letterhead, and signs, but the Japanese don’t pronounce “Mahz-da.” Instead, they use the founder’s name “mat-su-da” in any conversation regarding the company.

We hope that you enjoyed this little lesson in Japanese. How about a short video, originally posted by Mighty Car Mods, of an actual native-Japanese-speaking person showing us how it’s done?