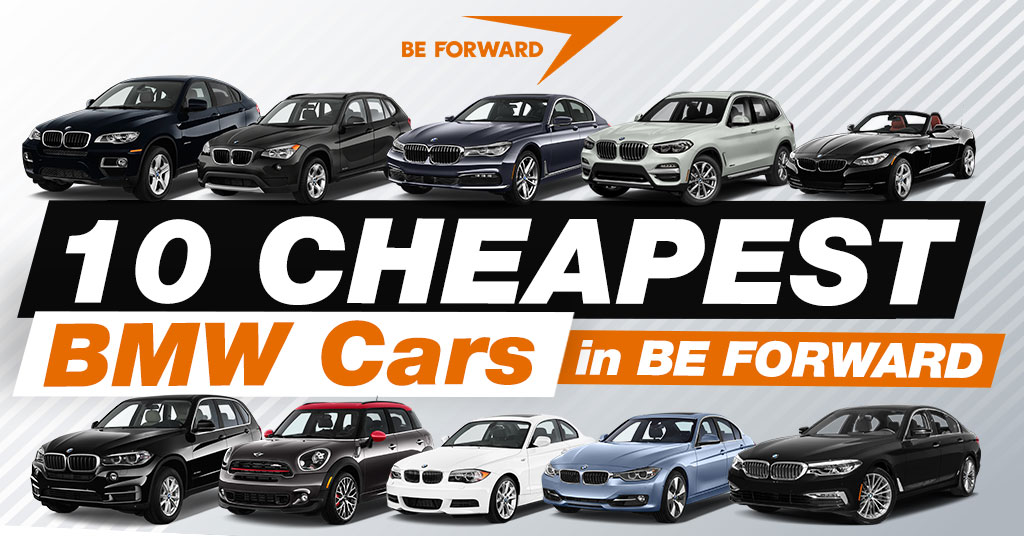 BMW is one of the top-selling brands of luxury cars globally and a leading manufacturer too. BMW cars are known for their innovative features, impressive fuel efficiency, exquisite styling, and reliability. This makes BMW vehicles one of the most famous executive luxury cars in the automotive market. Now, let us take a look at the 10 cheapest BMW cars in BE FORWARD.

If you are in the market for a new car that is reliable then why not consider a BMW? Latest BMW features some fuel-saving technologies that make their cars more fuel-efficient than others.

The BMW 6 Series is a luxury sports car that was introduced in 1972 as a 2-door coupe or a 4-door sedan. The 6 Series is available in a front-engine, AWD/rear-wheel-drive system, and the latest models come fitted with some notable standard features which include radar cruise control, climate control system, lane departure warning system, Head-Up Display, blind-spot monitoring system, Dynamic Drive Control with ECO PRO, Comfort & Sport modes, SRS airbags, and active cruise control with stop and go system.

The BMW X3 is a 5-door compact luxury crossover SUV with a longitudinally-mounted, front-engine, with AWD as an option. It was introduced in 2003 and featured standard systems including HDD navigation with VICS 3 media, lane departure warning, driving dynamic control with ECO PRO, cruise control, vehicle stability control, and an auto start/stop system.

BMW Z4 comes fitted with features such as electric power steering replacing the traditional hydraulic power steering used by the Z3. A 6-speed SMG gearbox was offered as an option on the 2.5 and 3.0 roadsters in 2002.

The BMW X5 was first introduced in 1999. When the second-generation X5 was launched with many upgrades and improvements including an all-wheel-drive system that was attached with an automatic transmission the following generations receive many upgrades in the technology, exterior, and interior. The third generation started production from 2013 to 2018 and received further improvements and upgrades incorporating the latest technology features. Now it’s in the fourth generation beginning in 2019 to the present.

In early 2000 German automotive company BMW under the Mini marque first introduced the BMW Mini Hatch (stylized as MINI Hardtop in the US, or MINI hatch), also known as Mini One, simply the Mini, or Mini Cooper as a 3/5-door hatchback.

In late 2000 the 1st new-generation Mini Hatch was introduced, being the 1st model launched under the Mini marque after the original Mini was discontinued in the same year. In some European markets, the Mini One was powered by an inline-four 1.4L version of the Tritec engine, but all other petrol powered Minis used the 1.6L version. The soft-top convertible R52 was made from 2004 through 2008.

The 3-door Mini attached to an automatic transmission will reach 0–97 km/h in 7.3 seconds for the 3-cylinder 1.5L petrol model and in 6.4 seconds with the 4-cylinder 2.0L petrol engine.

The BMW 3 Series is a compact luxury 4-door sedan that debuted in May 1975 and is presently in its 7th generation. It has a sporty look with a roomy interior along with reliability, and great performance which makes it stand out from others. The BMW 3 Series is available in hatchback, convertible, sedan, and fastback models with superior engines. It comes packed with great features such as a parking assistant system, lane change departure warning, cruise control, multi-function steering wheel, electric power steering, keyless entry, traction control, electronic stability control, and anti-lock braking system.

The BMW 5 Series is a luxury 4-door vehicle that debuted in 1972 and is currently in its 7th generation. The BMW 5 Series is considered one of the most famous models of BMW and comes with a front-engine rear-wheel-drive setup as standard with the optional AWD system featured on the xDrive models.

BMW cars are one of the most famous luxury cars in the automotive industry, especially their sedan, SUVs version. With modern style and design, high-rated reliability, great features, powerful engine options, and state-of-the-art interiors the BMW cars are certainly one of the best executive cars and worth every penny. For more information about BMW cars visit the BE FORWARD.