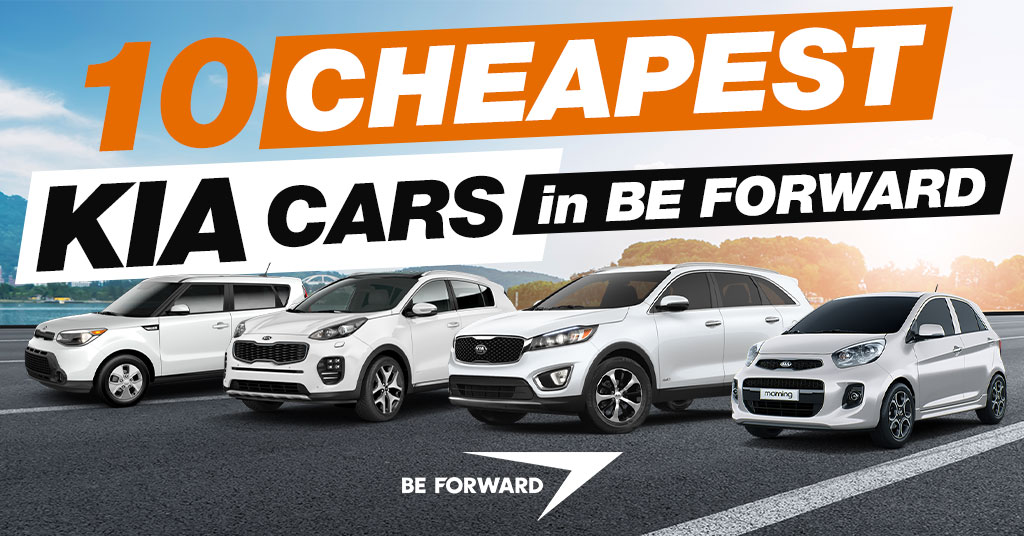 Introduction
In the early 1980s’ South Koreans ventured into car manufacturing by introducing a brand named KIA. The earlier KIA models had a character of not being so trustworthy, but gradually they successfully improved, and the latest models have been highly rated by numerous respected industry sources as some of the most reliable, robust, and dependable cars that deserve your trust.

In this article, we will review 10 of the cheapest KIA models sold by BE FORWARD just to brief you the reader or future buyer on what makes these cars top sellers. Please read on.

In South Korea, it is known as KIA K7 while in other markets it is known as Kia Cadenza. This is a full-executive sedan manufactured by Kia. In 2010 it was launched to replace the Kia Opirus/Amanti.

The KIA K7 1st generation uses a front-wheel-drive (FWD) Type-N platform with multilink rear suspension and a MacPherson front suspension. The K7 was offered with 3 gasoline engines ranging from 165 hp to 290 hp for the 3.5L Lambda. A new Theta II 2.4L with gasoline direct injection (GDI) that generated 201 hp was also available. In Korea a hybrid K7 700h was available, featuring a 159 hp 4-cylinder engine and a 35 kW electric motor.

It comes with standard features including a navigation system, leather seats, Bluetooth, KIA UVO, alloy wheels, and other luxury features. This was one of 5 Korean luxury sedans sold in the USA at the time, the other 4 cars being the Hyundai Genesis, KIA K900, Hyundai Equus, and Hyundai Azera.

Nappa leather seats are commonly found on more expensive vehicles such as those from Mercedes-Benz and BMW. The Nappa leather is available in 3 colors: white, black, or beige (the white interior requires all 3 packages available on the K7: Technology, Luxury, and White Interior Packages). The driver’s seat is both ventilated and heated, and the passenger’s seat has heating available as well. Available features include heated rear seats and a dual sunroof.

In 2016, the 2nd generation KIA K7 was redesigned by Peter Schreyer. The car comes fitted with a revised V6 3.3L that produces 290 hp. Apart from the six-speed automatic, the K7 is attached with a new in-house developed 8-speed automatic with a drive mode select system.

The K5 (Optima) is a 4-door/5-seat mid-size sedan built by the Korean company KIA Motors. In 2005 the K5 replaced the Optima with the release of the 2nd generation. The K5 has changed with the 2021 model being lower, wider, and slightly longer than the car it replaces.

The K5 (Optima) body is curvier and the exterior is well proportioned. With enough headroom, it features a coupe-like roofline that gradually descends to afford back-seat occupants. The K5 overall dimensions are extended to give it a sportier and rear-drive profile.

The interior is well finished, spacious with well-designed seats and comfortable, and some luxurious finishes. To increase outward visibility the dash is placed further forward.

The K5 (Optima) comes fitted with a list of inline-4 engine choices. The standard model comes with a 2.4L I4 that generates 185 hp and optional engines include a 1.4L I4 turbocharged and a 2.0L inline-4 turbocharged. All K5 models manage average fuel consumption of 10 km/l or higher and are FWD.

Forte’s cabin has a clean and simple layout, featuring straightforward displays, and an effective infotainment system. From the tambour-covered console storage to the rotary climate control knobs the cockpit finishing features high-grade plastics with details nicely underplayed all over.

The front seats are comfortable, well-contoured, and supportive. The back seats can accommodate 3 adults, but 2 will be more comfortable. Leather upholstery, heated seats, and a ventilated driver’s seat are available as options while the seats covered with cloth upholstery come as standard.

The Forte comes with 3 optional 4-cylinder petrol engines. The standard model comes fitted with a 1.8L engine with 145 hp, a 2.0L engine with 173 hp, and a 1.6L engine turbocharged with 201 hp fitted on higher trim. These engines are supported by a 6-speed manual or a 6-speed automatic transmission.

Rio’s cabin is elegantly designed and built with quality materials. The cabin is spacious and the front seats are supportive. The backspace is adequate to accommodate 3 adults, but tall people might find limited legroom.

The Rio comes fitted with a 1.3L, a 1.5L, or 1.6L inline 4-cylinder engine; these engines offer sufficient power for city cruising and have no trouble overtaking vehicles on the highway. They are supported by a 6-speed manual or 6-speed automatic transmission. The average fuel consumption is 13.6 km/l or above.

In North America known as the KIA Forte, In South Korea known as K3 or the Forte K3 or Shuma in China but this entire name is known as KIA Cerato in other markets, KIA Cerato is a compact car produced by the South Korean manufacturer KIA since 2003. It is available in 5-door hatchback, 2-door coupe, and 4-door sedan variants.

In 2003 the KIA Cerato was introduced in South Korea, using Hyundai‘s Beta II (G4GC) (CVVT-enabled) 4-cylinder engine and sharing a platform with the Hyundai Elantra (XD). It replaced the Shuma hatchback and Sephia/Mentor sedan.

Until 2005, the Cerato was still named Sephia for Latin American markets when it was discontinued in favor of the name Spectra.

In 2014 KIA Bongo was updated, it received a new 6-speed gearbox and much more efficient Euro IV standard engine, a new body design that includes new 15-inch wheels, and a redesigned front end with a new grille. The K2500, K2700, and K3000S have either a turbocharged 2.5L engine that produces 130 hp, or an optional 2.7L engine that generates 80 hp and another 3.0L that adds 5 more hp from the 2.7L. It offers enough loading capabilities; also they have 3 cab options: double cabin, standard, and super. The EV version was launched in South Korea in January 2020 and it can go up to 211 km when fully charged.

The KIA Soul is a 5-door/5-seat hatchback manufactured by KIA Soul Motors. The Soul was 1st released in 2008 and is still in production to date. The Soul is a very good car and built for urban maneuvers.

The exterior of the KIA Soul features bug-eyed headlights, and a blunt front end with a very small grille, while at the back there are tall taillights that improve the car’s appeal. The interior of the Soul is well designed featuring comfy seats and some soft-touch materials.

KIA Sportage is one of the best compact crossover SUVs that has been manufactured by the Korean company KIA Motors since 1993. In 2015 the 4th generation Sportage was released.

The KIA Sportage is a 5-door/5-passenger car. The driver has good visibility and its front seats are comfortable. At the back there is plenty of room, providing adequate headroom and legroom, even for the tallest of passengers.

The Sportage comes with the option of turbocharged or naturally aspirated 1.6L, 2.0L, and 2.4L petrol or 1.6L, 1.7L, and 2.0L diesel engines. These engines are linked to a 6-speed manual, 6-speed automatic, 7-speed DCT, or 8-speed automatic.

The KIA Sorento has evolved over the years and is now in its 4th generation. The exterior appearance of the Sorento is attractive and makes it stand out from the SUV crowd.

A big KIA signature tiger-nose chrome logo surrounds its grille flanked by nice headlights with DRLs on the front face. High-end models feature cornering fog lamps with xenon headlights. At the back, there is a LED taillight and a roof spoiler.

While the instrument panel features a large speedometer at the center flanked by a full-color multifunction display the Sorento’s interior is classy featuring a touchscreen infotainment display housed in a silver-trimmed housing. The Sorento is available as a 7-seater with 3 rows or a 5-seater with 2 rows.

The KIA Morning/Picanto is a mini car manufactured by KIA Motors. The Picanto is a cheerful and cheap 5-seat/4-door car that has been around since 2004 and is now in its 3rd generation, released in 2017.

The entry-level Picanto is so basic; it features a central locking and 2-speaker stereo system, while the mid-range trim is better equipped with features such as air conditioning, a leather-covered steering wheel, alloy wheels as standard, and Bluetooth connectivity. The upper range Picanto is the best with features such as climate control, rear-view camera, rear parking sensors, the sleek color display with sat-nav, and cruise control.

From being mocked to being considered KIA has come a long way to make it this far, to give the established big brands of yesteryears some headache. The cars we have briefly covered are all great cars; they value your money and attention. Buy yourself a KIA and you’ll never regret it Visit BE FORWARD.