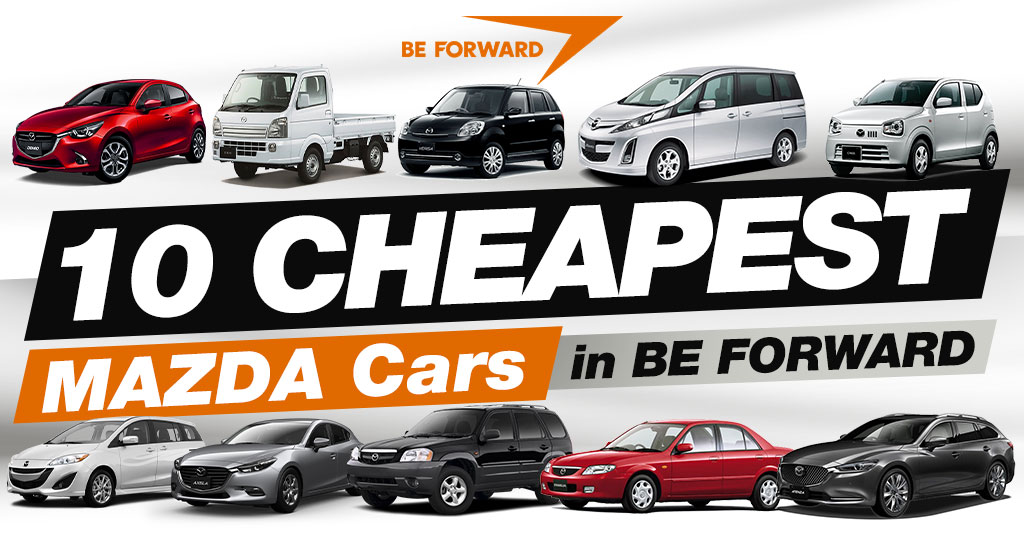 Through the years, Mazda has produced stylish and practical vehicles covering a wide market.  The technology behind Mazda cars speaks for itself as Mazda‘s are known for their reliability, great looks, and magnificent handling. However, you don’t need to have to break the bank to buy yourself a Mazda. Let’s get familiar with some of the 10 cheapest Mazda cars.

Mazda Biante is a stylish minivan that is packaged with enough space for your cruising comfort. The interior is roomy and sure to appeal to you if you have a family yet still want to enjoy great driving and handling on the road.

The Biante comes fitted with several engine options such as 2.0 L MZR LF-VD DOHC I4, 2.0 L Skyactiv-G (PE-VPS) DOHC I4, and 2.3 L MZR L3-VE DOHC I4 petrol engines. These engines are attached to either a 4-speed automatic, 5-speed automatic or 6-speed Skyactiv-Drive automatic transmission.

The Mazda Atenza/Mazda6 is a midsize sedan produced by the Japanese company Mazda from 2002.

The Mazda Familia is a subcompact/compact family car produced by Mazda from 1963 to 2003.

For the 2000 model year, the Mazda Familia introduced the Familia line of compact cars. Production sustained for 14 model years over 2 generations.

The Mazda Tribute is a 5-door SUV that was manufactured from 2000 to 2011 with 2 distinct generations.

The Mazda Axela is a 5-door hatchback that was introduced in 2003.

The Mazda Carol is a Kei car that was manufactured from 1962 to 1970 and was reviewed in October 1989 as a rebadged version of the Suzuki Alto.

The Mazda Verisa is powered by a ZY-VE 1.5L DOHC straight-four petrol engine generating power of 83 kW at 6000 rpm, and torque of 140 Nm at 4000 rpm, paired with an automatic transmission.

The DG41 and DH41 for 4WD versions were unveiled in June 1989. Mazda still sells the Scrum Truck under its own name. The Scrum’s are rebadged versions of the Suzuki Every/Carry and are powered by Suzuki engines. The first model year had 550-cc Suzuki F5B engines generating 38 kW with an intercooled turbo; after only 9 months, this was replaced by DG/DH51 660-cc, 43 kW which was the larger-engined as the Kei car rules changed that year.

The Mazda Demio is a 5-door supermini car that was introduced in 1996. The Demio is a reliable car powered by some notable standard features which include air conditioning, power windows, SRS airbags, and the Mazda i-ACTIVSENSE with Lane Departure Warning System, Smart City Brake Support, Blind Spot Monitoring, Rear Cross-Traffic Alert, and High-Beam Control.

You can always trust Mazda brands to have quality, fuel efficiency, safety, and grace when going on the road.

Therefore, if you’re looking to enjoy some massive savings, check no further than Mazda because of the excellent handling, fuel efficiency, and affordable prices. Mazda is known for its superiority in the automotive industry and speaks for itself. Mazda is built to be robust, durable, reliable, and efficient.

The 10 cheapest Mazda models that have been briefly explained in this review are just some of the Mazda models that prove Mazda’s worthiness in their classes. There are more Mazda selections in our store just visit BE FORWARD and choose your brand.