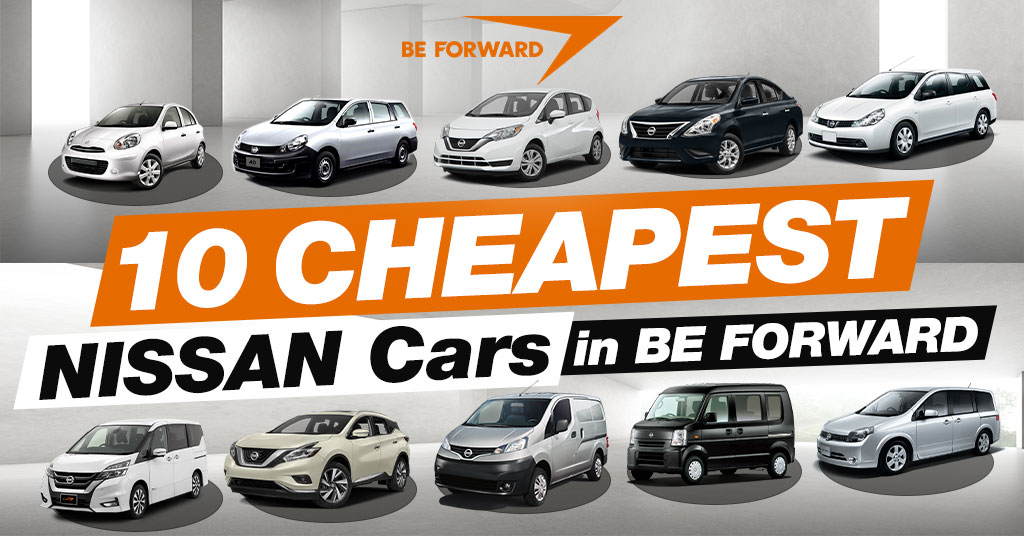 Introduction
Nissan Motor is a Japanese automobile manufacturer with headquarters in Nishi-Ku, Yokohama, Japan. Nissan is among the famous automobile makers whose brand speaks for itself. Nissan has outstanding brands for off-road driving, luxury, and family vehicles. From hatchback, sedan, Minivan, saloon to SUV, Nissan still produces vehicles for off-roading and other uses like 4×4, 2WD drive, and high-performance cars. Therefore, today we are going to pass through the 10 cheapest Nissan vehicles in BE FORWARD.

The interior of Lafesta is roomy and offers more comfort while driving and the seat is well positioned which offers a nice view when driving.

Its exterior appearance features a striking aerodynamic design and horizontal chrome grille on the front – expressing a bold presence and sportiness – characteristic of the Nissan Highway STAR series. Lafesta is equipped with the adoption of dual power sliding back doors for easy entry/exit and easily operable, versatile seat configurations. The Lafesta Highway STAR is also powered by Idling Stop, which helps it to realize best-in-class. The Lafesta offers an average fuel economy of 16.0km/L.

The Nissan Clipper Van is an automobile nameplate by Nissan that has been used for 2 separate commercial car ranges of Kei trucks in Japan. This was a rebadged version of Prince’s “Clipper” light/medium-duty commercial vehicle range.

In 2012, the Clipper Van van received its facelift and was renamed the NV100 Clipper (van). First introduced on the 1.5L AQTI series and featured a distinct frontal treatment, with 6 oval openings for cooling. The BQTI “Super Clipper” with a larger 1.9L engine was added to the lineup in February 1961. Super Clipper was introduced in January 1963 featuring quadruple headlights. Engines remained the same as before, a 1,862 cc unit with 71 kW for the T631 Super Clipper and with a power of 54 kW for a 1,484 cc four for the T630.

The all-new Nissan Clipper Van also features enhanced facilities inside its large, easy-to-use interior cabin, including a folding front passenger seat mechanism that is handy when stowing long items inside the cabin, independently folding back seats, and a high-performance car alarm that is unique in this class of vehicle. It delivers best-in-class turning performance with a minimum turning, enabling smooth handling even when turning into narrow streets, carrying out parallel parking, or backing into a garage.

The Nissan Vanette Van comes fitted with a back-view camera to ease parking in close-fitting spaces, power windows, and intelligent keys. Also, Nissan Vanette Van is powered by some safety features like an electronic brake force distribution, standard airbags, and side airbags. Nissan Vanette’s fuel consumption is around 8.9 Km/L, making it one of the most fuel-efficient vans in the market.

The Nissan Murano is a 5 door midsize crossover SUV that has been available since 2002. Marketed and sold as a sporty vehicle for active families. The Nissan Murano has received numerous awards and recognition for its outstanding features. For example, in 2010, the model received the best and highest ratings on the front, rear, and side-impact evaluations from the Insurance Institute for Highway Safety.

Having a seating arrangement for up to 5 passengers and 5 doors, it is roomy and convenient for transporting larger amounts of people or cargo. The car’s main fuel type is petrol, and it has an automatic transmission system that is also offered with 4-wheel drive and offers overall vehicle control along with a high-quality interior and comfortable seating, and smooth handling.

The Nissan Serena is a 5-door compact passenger minivan that was introduced in 1991 and has grown larger and more sophisticated after numerous generations of improvements. The model’s previous generations included a front engine and back wheel drive layout with a line axle fitted on leaf springs.

The Nissan Wingroad is a five-seat and five-door wagon that was manufactured by Nissan Motors from 1996 to 2018 when it was discontinued. The 1996 Nissan Wingroad (Y10) came powered by a 1.5L GA15DE inline engine that produced 105 hp at 6000 rpm. The engine transfers power to the front wheels via a 5-speed manual transmission.

The Wingroad Y12 came in the Sporty Aero series standard and RX/RS series. The exterior appearance of the Y12 Wingroad is sporty and stylish while making full use of the wagon functions.

The 1st generation Nissan Tiida sold as a 5-door hatchback and 4-door sedan and was manufactured from 2004 to 2012. It offers multiple storage sections, a roomy interior, and enough legroom where you can sit comfortably. Nissan Tiida has been produced for two-generation.

There are several storage facilities in the cabin that are suitable for storing items such as documents, smartphones, and beverages. There is a central storage tray, door pockets, and a glove box. For the seat formation, the 2nd-row seat could be folded down, giving more cargo space.

The Nissan Note is spacious and has a 5-door hatchback that is cheap and economical to run.

The Note interior is well-arranged and features some plastic finishing. The driver can easily adjust the seat position with plenty of headroom and legroom for back and front passengers. The cargo space is 532L which expands to 1084L with the back seats folded.

The latest Note (2012 to 2020) JDM came fitted with the 1.2L I3-cylinder HR12DE or HR12DDR which has an average fuel consumption of 20 KM/L. These engines are supported by a 5-speed manual transmission or the X-Tronic CVT.

The Note is installed with high safety technologies such as ESC, seatbelt reminder buzzer as standard, 6 airbags, and the optional Nissan Safety Shield, which includes a 360-degree camera, blind-spot assistance, moving object detection, and lane-departure warning. Safety Shield is standard on the high-end Note version.

The Nissan Ad Van is a compact wagon that is built for transporting cargo and humans from one place to another. In trying to win over more fans, the vehicle has gone through some major transformations over the years.

The interior and exterior designs are now more attractive which offers the vehicle a perfect van. It can be used as both a passenger or cargo van thanks to the comfort levels and the spacious cargo space. It comes with a radio and CD player in most models, along with power windows and power steering. The fuel consumption of the Nissan Ad Van is around 11.9 Km/L.

The Nissan March has featured numerous engines, the latest is the 2 three-cylinder 1.2L HR12DE and HR12DDR engines that generate power to the wheels via a 5-speed manual, and are attached to the Xtronic CVT transmission.

The March has numerous storage facilities such as bottle holders, cup holders, glove boxes, and front door pockets and at the back, you get a boot that is large enough to accommodate a few luggage, but the cargo space can be increased by folding the back seats.

You can always trust Nissan brands to offer grace, quality, fuel efficiency, and safety when hitting the road. Not only do you get to have financial muscles to spend in your wallet, but you also get to explore different types of roads like royalty.

Therefore, if you’re looking to experience some substantial savings, look no further than Nissan because of the excellent fuel efficiency. Nissan speaks for itself and is known for its superiority in the automotive industry. Nissans are built to be durable, robust, efficient, and reliable.

The 10 cheapest Nissan models that have been briefly covered in this article are just some of the Nissan models that prove Nissan’s worthiness in their categories. We are always ready to serve our customers and please visit BE FORWARD and choose your car from our comprehensive list.