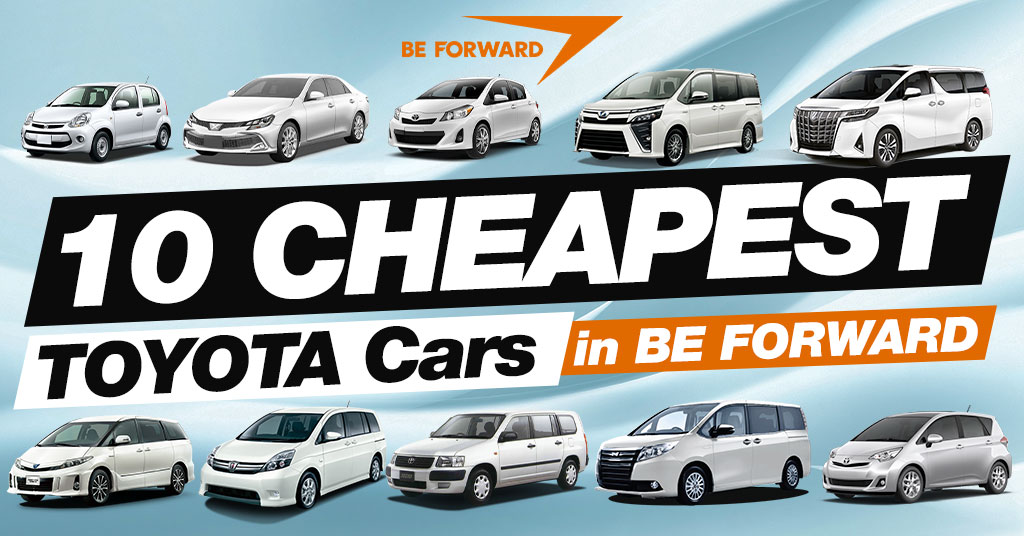 Introduction
Toyota is one of the most popular brands of vehicles that are available in different categories which offer roomy interior, great fuel efficiency, reliability, and luxury. Toyota is well known for its affordable maintenance, affordable prices, and affordable running cost but also comes with an appearance that makes it more eye-catching to the people. Now, let us talk about the top 10 cheapest Toyota cars in BE FORWARD.

Toyota cars are well-famous all over the world –not just because of their classic design, roomy interior, and aesthetic design, but also their excellent fuel economy.

The engineers at Toyota seem to have a best winning formula after decades of achieving the cars on production lines.

The Toyota Ractis is a 5-door hatchback that was first introduced in October 2005 with 2 distinct generations. The Ractis is available in a 4WD or front-wheel system with 5 seats and comes with passenger and driver airbags, power windows, air conditioning, anti-lock braking system, traction control, vehicle stability control, a 60/40 folding rear seat, and electronic brake-force distribution.

The newly-developed active CVT is powered by Super CVT-i which contributes to smooth driving and low fuel consumption while the 7-speed sports sequential shift magic with paddle-shift enhances your driving wish.

In addition to the Panorama Package and L Package options from the previous year’s model, there are more special feature selections like the GL Package/ HID and G HID, which feature light blue mica metallic for outer panel color and discharge headlamps (complete with auto-leveling function). This Ractis also packs a powerful sound system, adding 2 tweeters to the front for a full six-speaker audio system.

The Toyota Noah is a minivan car, initially released in 2001. The Toyota Noah, before known as the Toyota LiteAce Noah, is the most affordable Toyota minivan available in Africa, especially in the Tanzania market. It replaces the LiteAce/TownAce Noah, recalling the “R” model code and generation numbering. It can carry 7 or 8 passengers and it was the 1st Toyota to be powered by the Valvematic engines back in 2007.

Toyota Noah has 2 engines which are the 1AZ-FSE 2.0L I4 and 3ZR_FAE 2.0L Valvematic. The Toyota Noah is a very spacious car that can happily accommodate up to 8 full-sized adults and their luggage.

Noah offers spacious interior space which is eccentric. The upper trims model is much more comfortable with extra amplified seats, leather seats on the second row, and a beige interior.

The only problem we have with Noah is the instrument cluster positioned in the center of the dashboard. The 2nd generation of Noah came fitted with 2 engine options which are the 3ZR-FAE 2.0L Valvematic I4 (petrol) and 3ZR-FE 2.0L I4 (petrol) engines. Each is powered by dual VVT-I (Variable Valve Transmission-i) and Super CVT-i transmissions, which support fuel efficiency and power.

Toyota Noah offers an average fuel economy ranging from 12.6 km/L to 14.2 km/L with a fuel tank capacity of 60L for a full tank.

The Toyota Noah models from 2001 – 2004 come with a gearbox in a 4-speed automatic or a CVT from 2004 – 2007 models while the 3rd generation comes with CVT-i (petrol) or eCVT for hybrid models. The Toyota Noah can be equipped with a traction control system, cruise control, a multi-functional steering wheel, dual-zone climate control system, keyless entry system, rear air conditioning, and a rear camera.

The Toyota Succeed Van is a 5-seater that is quite popular among business people in Tanzania.

The Succeed Van has enough legroom at the front seats and is quiet enough to accommodate tall people while the back seats are appropriately squeezed to facilitate more storage room for the cargo.

The Toyota ISIS is one of the multipurpose vehicles from the Toyota lineup first released in 2004. Toyota ISIS is a 7-seat large MPV (Multi-Purpose Vehicle) manufactured by Kanto Auto Works which is a member of the Toyota Group. In September 2004 after being launched, it was sold only in Japan. It features 2 sliding doors on both sides right and left and is available with either 4WD or front wheel.

Its popularity in the Tanzanian market is driven by its affordability, fuel economy, and utility. It competes with the Nissan Lafesta, Toyota Wish, Subaru Exiga, and Mazda Premacy. It is a luxurious car with a roomy cabin and exclusive features such as the flat-folding seats and the large pillarless doorway on the left side.

The Toyota ISIS produced a single generation that lived for 13 years from 2004 to 2017. It can accommodate 7 passengers in a third-row seat configuration. The space is excellent on the 1st and 2nd rows. The 3rd row is somehow limited where tall passengers cannot seat comfortably but are still better than most of its competitors.

The ISIS comes with a fuel tank capacity of 60L with a full tank the same as Toyota Alphard, Noah, and Voxy. The Toyota ISIS is powered by a 1.8L and offers fuel consumption of approximately 15.2 Km/L while the Toyota ISIS equipped with a 2.0L is about 14.4 Km/L.

The Toyota Estima comes fitted with 3 engine options, the 2.4L 2AZ-FE engine, 2.4L 2AZ-FXE I4 (hybrid) engine, and the 3.4L 2GR-FE engine which is available in both normal and hybrid versions.

Toyota Alphard started production from 2002 to the present, and in some countries is known as the Toyota Vellfire. The Alphard is a luxurious minivan from Toyota lineups.

The Toyota Alphard is a tall large van that comes with alloy rims and fog lights as standard. The 2nd generation features bi-level headlights and a sharper styling with a massive aero bumper.

The Toyota Alphard is among the most comfortable minivans we’ve seen in the market from Toyota lineups.

There’s adequate cargo space to store about 3 medium-sized cases with all the 3 rows in use. With the 3rd-row seats folded up, the cargo space becomes really large. In addition, the 2nd-row seats can be slid forward to make an even bigger cargo space.

The Toyota Voxy looks like a Toyota Noah which is a 5 doors minivan – 2 of which are sliding doors that give an interesting and unique look to it. The car has been produced for 3 generations. The 1st generation is known as the R60 produced from 2001 to 2007, the 2nd generation is known as the R70 from 2007 to 2014, and the 3rd generation is identified by the code R80 from 2014 to the present. Toyota Voxy was intended to be the sportier version of the Toyota Noah, featuring clear split headlamps and taillights.

The Voxy offers charming and interesting styling points and qualifications as well as a trustworthy power train. The Voxy is extremely rated by preceding and current owners, as well as automotive professionals, and can accommodate up to 7 or 8 passengers. In addition, the Voxy offers an outstanding cargo space featuring a roomy cabin area. It is available in a front-engine/FWD (Front-wheel-drive) layout or with a full-time 4WD.

Toyota Voxy comes fitted with 2 engine options available; the 1AZ-FSE 2.0L, and the 3ZR-FAE 2.0L.
The 2nd generation came with 2 engine options which are the 3ZR-FE I4 2.0L and 3ZR-FAE 2.0L Valvematic I4, both petrol engines. Each is powered by dual VVT-i and Super CVT-i transmissions which support power and fuel efficiency. The Voxy offers a fuel consumption ranging from 12.8 km/L to 14.4 km/L with a fuel tank capacity of 60L of a full tank. The seats are high for a normal seating position that is perfect for long-distance travel. On the outside, the Voxy has a sportier look with a rounded bonnet and smaller grille.

The Toyota Vitz is among the most famous hatchback in the Toyota lineup and a very popular car in the Tanzanian market thanks to its affordability, reliability, utility, and fuel economy.

The Toyota Vitz is a 3 or 5-door subcompact hatchback car which is also known as the Toyota Echo or Toyota Yaris. It comes with a 4WD or front-wheel and some notable standard and safety features which include a seatbelt with pre-tensioners and force limiters, driver and passenger airbags, climate control, and an anti-lock braking system, brake assist, smart entry, start-stop system, vehicle stability control, and traction control.

The Toyota Mark X comes fitted with a 6-cylinder engine with the only difference being their specifications. These engines ranged from conservative and modest to sporty and powerful.

There exist 2 generations of the Mark X produced between 2004 and 2019. The models have utilized several 6-cylinder engines as it was fitted in the 1st generation.

The cabin is roomy, the front seats are soft, comfortable, spacious, and large; they also offer significant side support and under-leg. There is adequate headroom, legroom, and knee room for both driver and front passenger. The back seats are equally very comfortable and soft, they can accommodate 3 passengers, and with the passengers in the window position afforded much better leg and knee room. The back middle seat is a bit firm and raised; it is best suited for children.

Whether you’re purchasing used cars, it’s always a good idea to look to get vehicles with the cheapest price.

In our breakdown today, we’ve gone to great lengths in explaining the 10 cheapest Toyota cars in BE FORWARD.

We understand that the Toyota listed here may meet the needs of everyone currently searching for the cheapest Toyota brand. That is why we always carry a large inventory of lineups from different categories. You can see our entire Toyota cheapest cars by visiting BE FORWARD.