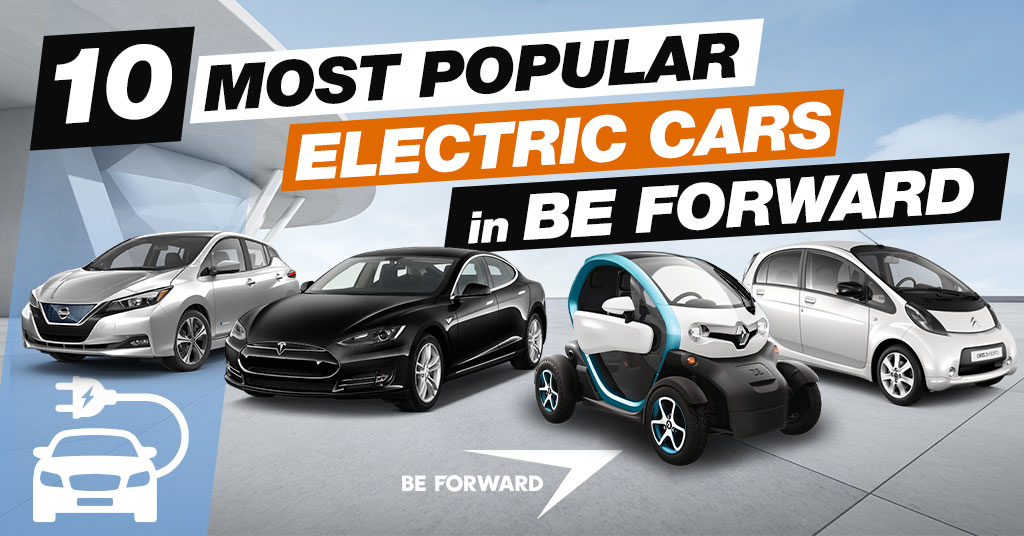 Electric cars or EV cars are now gaining more attention and popularity than before, due to their fuel efficiency and environmental benefits. Also, because of its offer better handling, smooth performance, and a quiet and pleasant ride.

In this article, we will talk about the 10 Most Popular Electric Cars in BE FORWARD.

The Renault Samsung Twizy is a two-door quadricycle that was first produced in 2012 up to the present by Renault. The Twizy is a one and two-seat mini vehicle with a rear-engine, rear-wheel-drive system and offers some notable features including airbags, four-point front seatbelt, lockable steering column, adjustable front seat with a built-in headrest, LED daytime running lights, battery gauge, regenerative braking control, and electronic engine immobilizer. The Renault Samsung Twizy offers two models: the one-seater Twizy Urban 45 with electric power and a speed of 4 kW (5 hp), 45 km/h (28 mph); and the Twizy Urban 80 with electric power and torque of 13 kW (17 hp), 57 Nm (42 lb-ft), and speed of 80 km/h (50 mph).

The Mitsubishi i-MiEV is a five-door electric Kei car that was first produced in 2009 up to the present by Mitsubishi. The i-MiEV is available in a rear mid-engine, rear-wheel-drive system offering some standard features such as airbags, power windows, anti-lock braking system, traction control, regenerative braking control, and three driving mode selector. The Mitsubishi i-MiEV comes fitted with a single permanent magnet synchronous motor with a power output of 49 kW (66 hp) at 2500 – 8000 rpm and a torque output of 180 Nm (130 lb-ft) at 0 – 2000 rpm, with a continuous power rating 35 kW (47 hp). Also comes with a 16 kWh Li-ion battery pack with 14 hours of estimated recharging from a 110-volt power supply and 7 hours from a 220-volt power supply.

The Mitsubishi Minicab MiEV is a five-door electric van that was first produced in 2011. The Minicab MiEV is available in a front-engine, rear-wheel-drive / four-wheel-drive with standard features which include driver and passenger airbags, anti-lock braking system, electronic brake-force distribution, electronic power steering, traction control, and air conditioning. The Mitsubishi Minicab MiEV has offered an electric motor with power output and torque of 30kW (41 PS) at 2500 – 6000 rpm, 196 Nm (20 kgm) at 0 – 3000 rpm coupled with two battery options: 10.5 kW-hr delivering a range of 100 km (62 mi) and 16.0 kW-hr delivering a range of 150 km (93 mi) on the JC08 mode.

The Kia Ray EV is a five-door minivan with a front-engine, front-wheel-drive system that was first produced in 2011 up to the present by South Korean automaker Kia. The Kia Ray EV is an all-electric vehicle offering some standard features which include six airbags, rollover detection, LED headlamps, anti-lock braking system, negative braking system, traction control, air conditioning, and electronic power steering. The Kia Ray is equipped with an electric motor producing 50 kW (67 hp), with a 16.4 kWh lithium-ion battery that delivers an all-electric range of 138 km (86 mi).

The Toyota Prius is a four-door sedan with a hybrid Drivetrain that was first marketed in 1997 and is now in its fourth generation. The Prius is available in a front-engine, four-wheel-drive / all-wheel-drive layout and comes fitted with some notable standard features which include driver and passenger airbags, 6.1-inch infotainment touch screen, multi-function steering wheel, climate control, Bluetooth, cruise control, hill-start assistance, and LED headlights. The Toyota Prius is powered by a 1.8L 2ZR-FXE straight-4 gasoline hybrid engine producing a power output of 73 PS at 5200 rpm and 142 Nm at 4000 rpm torque, with a 0.75 kWh lithium-ion battery delivers an EPA rating of 4.1 L/100 km city, 4.4 L/100 km highway, and 4.2 L/100 km combined.

Electric cars may not offer the high-performance adventure that some of you are looking for, but they certainly can offer a better fuel efficiency than some cars. They are also the best cars for our environment and offer lower maintenance costs. So, what are you waiting for? You can visit the BE FORWARD store for more information on how to get one of these cars.