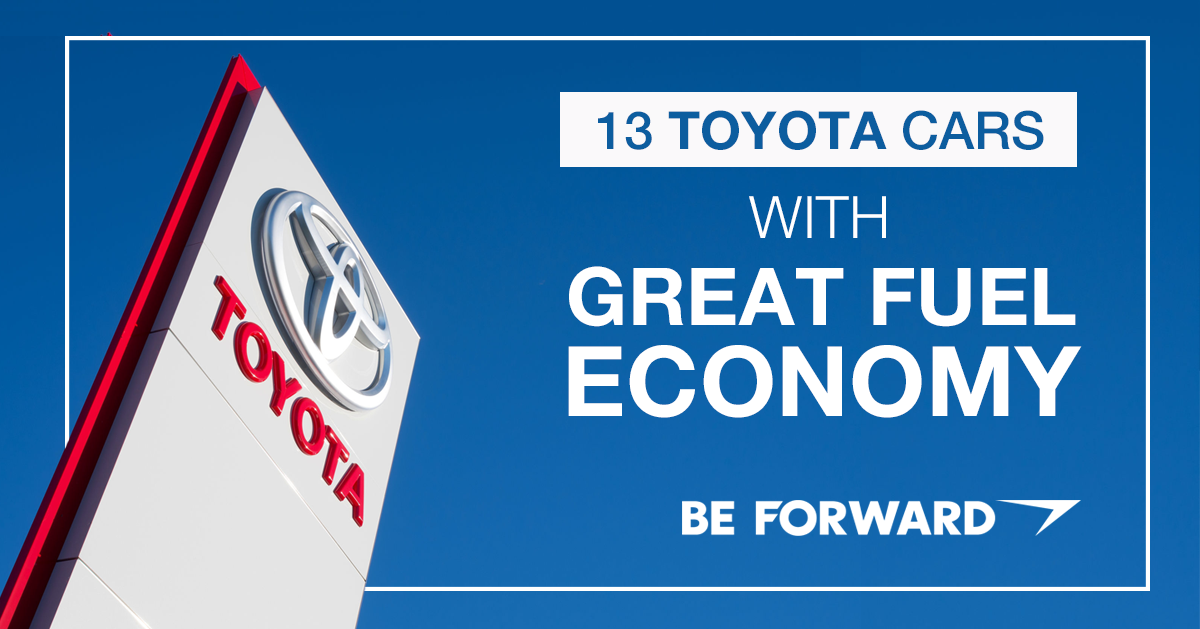 Over the years, Toyota has built a powerful brand around the globe. Their cars are highly regarded, thanks to their performance and reliability on the road.

This status has elevated the company to become the world’s largest car manufacturer. Understandably, Toyota has a large presence on African roads. The design of their cars offers somewhat of a bespoke aesthetic that meshes brilliantly with the African landscape.

Which Toyota Cars Have the Best Fuel Economy?

It’s exciting to learn that there are more than a couple of Toyota models that offer fantastic fuel economy, with plenty of options to match your budget. Here are the best by car type (click on each model to learn more):

Which Toyota hatchbacks are best on your wallet with fuel economy? We’ve assembled the list below.

The Toyota IST is a subcompact vehicle that ships with either the 1.3 or 1.5-liter VVTi engine.

Under the hood, the car packs great power producing 65-81 horsepower, which pairs up nicely with the 4-speed automatic system.

With a trip computer giving your notifications on the number of kilometers to empty, the mean fuel economy, and outside temperature, and instant fuel economy, it’s relatively easy to monitor performance on the go.

An eco-light is also present to notify you when you’re cruising through the roads. The IST has fantastic fuel economy with an average fuel consumption of 11.5 km/L. We’re certain you’ll also love the keyless entry system.

For a complete look at the Toyota IST, read our full review here.

The Toyota Ractis name stems from the words run, activity, and space. The vehicle has become popular all over the world thanks to those three qualities.

With a tank capacity of 42 liters, the Ractis is excellent in terms of fuel economy. The 1.3-liter version of the vehicle has a fuel consumption averaging 18.2 km/L while the 1.5-liter version averages 15.2 km/L.

The vehicle is produced with front wheel drive mechanism and comes with a transmission system of automatic 5-speed. The Toyota Ractis is the perfect vehicle if you’re looking to take lengthy family getaways.

How does the Toyota Ractis stack up against Nissan’s formidable Note hatchback? Find out with our comparison here.

This car shines in both the interior and exterior departments.

The option to include alloyed wheels is a surefire way for you to boost the aesthetic value of the Passo. Given its spacious and impressive design, the Passo is best suited for urban zones.

The Passo offers excellent fuel economy with the consumption rate set at about 17 km/L. We’re certain you’ll also enjoy the fantastic navigation system in place plus the comfy seats.

The Toyota RunX has fantastic aerodynamics and great handling on the road.

Having been initially intended for the Japanese domestic market, the Toyota Runx fits like a glove on the African landscape. The cars have sporty pretensions and the hand drive is to the right side.

With a spacious interior to close the deal, the Toyota Runx is a fantastic car choice if you’re looking for a car with great value. The mean fuel consumption is set at about 16.6 km/L.

The interior department of the Toyota Allex is quite lush.

The vehicle features quality seats, with a self-luminous meter, plus some extra metallic and wooden panel for a neatly finished design.

The manufacturer makes the car using 4-cylinder gasoline engines available in two options, the 1,496cc option that packs 110hp and the 1,795cc shipping with 190hp.

In terms of fuel consumption, the 1.8-rated fuel engine consumes about 12 km/L while the 1.5L engine uses an average of about 15 km/L.

If you’re looking for a fuel-efficient Toyota minivan or MPV, check out the impressive models below.

This compact minivan is a crowd favorite thanks to its stylish appeal and interesting features.

The spacious cabin area is further complemented by an impressive cargo space.

Other specifications include optional car navigation system, airbags, sunroof and moon roof, a traction control system and side impact bars. The Voxy is available to buyers as both front-wheel drive and four-wheel-drive systems.

In terms of fuel economy, the Toyota Voxy averages about 15.7 km/L. To know if the Voxy is the right minivan for you, check out our Noah comparison here.

The Toyota Raum is a compact car that shines in simplicity.

These vehicles run on gasoline as either FF vehicles with 109hp or as 4WD drive systems with a power of 105hp. Notably, all vehicle models have 4-speed automatic transmission systems.

Fuel consumption varies according to the model. The FF drive systems consume an average of 16.2 km/L while the 4WD systems use up 15 km/L.

The Toyota Ipsum has some luxurious feel on the interior section thanks to the wooden and metallic panels used.

Want a larger machine but still want to save on fuel? These Toyota SUVs are your best bet.

You can get the Toyota Vanguard as either a 5-seater or a 7-seater.

In terms of driving options, you have 2 choices. The manufacturer provides the models as either 4WD or a 2WD system.

Car enthusiasts love the Vanguard because of the good ground clearance at 7.5 inches. This means the vehicle is perfect for both off-road and on roading purposes.

The Toyota Harrier represents everything that we love about modern SUVs.

The car shines from a construction standpoint because of the reduced noise and vibration levels during driving.

The interior is also quite spacious as it can comfortably host 5 people. The legroom is also quite impressive as even tall individuals can travel without suffering from any space constraints.

Harriers usually come with an electric boot that really eases access. The manufacturer also ships the vehicle with extras like a wooden trim, DVD player, tilt telescopic steering and a reverse camera.

Want a fuel-efficient vehicle that can fit the whole family? Try these wagons below.

The Toyota Fielder is a robust 5-seater station wagon that is ideal for family settings.

The most popular Fielder choice is the 1500cc model which has an average consumption of about 15 km/L. If you’re looking for extra power, you can always go for the 1800cc option which consumes slightly more in terms of fuel economy.

Most recent models of the Toyota Fielder typically come with an automatic transmission from the manufacturer. However, older models are fitted with manual transmission systems. With the top speed at 180km/h and the tank size at 42 liters, the Fielder is capable of handling the cityscapes.

These options are available as either 5-speed manual transmission or 4-speed automatic transmission. Impressively, the 1.5-liter choice has a 4 Wheel Drive option.

On average, the 1.3 L engine has an 18 km/L consumption rate while the 1.5L engine comes with a 15 km/L fuel consumption. Given the fact that the fuel tank capacity is 50 liters, this car is the perfect ally to have when you’re up and about running your commercial ventures.

The 5-seater Toyota Succeed is quite popular among businessmen in Africa.

The legroom at the front seats is quite sufficient to accommodate tall people while the rear seats are aptly squeezed to facilitate more storage room for the boot. The waterproofing material used on the boot makes it ideal for transporting heavy luggage. The fact that the rear seats are easily adjustable further adds to the allure.

From a fuel economy standpoint, Succeed is quite efficient. The 1.5L engine averages about 15 km/L.

Whether you’re buying new or used cars, it’s always a good idea to get vehicles with excellent fuel economy. Not only does this mean you have to part with fewer wads of cash at the pump, but you also get to enjoy longer seamless trips in the open road.

In our breakdown today, we’ve gone to great lengths in explaining all the great choices Toyota have in terms of fuel economy. We’re sure you’ll be able to find something to love since we’ve highlighted various models that come in different shapes and sizes.

Importantly, as you narrow down to a particular vehicle, always remember to make an informed decision based on your driving style on the road. Happy driving!