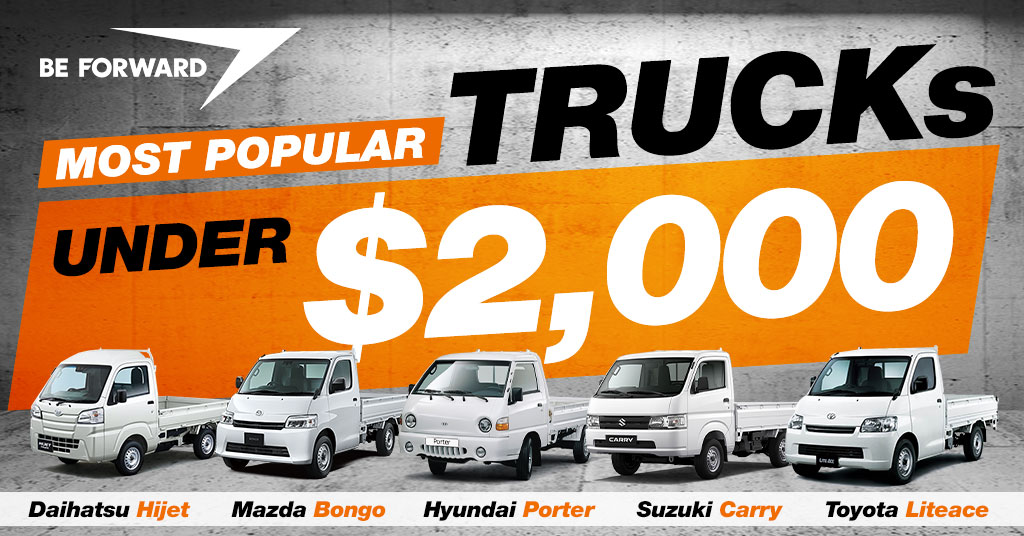 Nowadays, having a truck is an important decision whether for private or business use. There are many things to consider when in need of a truck, but one that is often looked at above all others is price and carrying capacity. What might come as a surprise is that there are many low-cost, high-quality, used trucks that you can purchase right now from BE FORWARD. 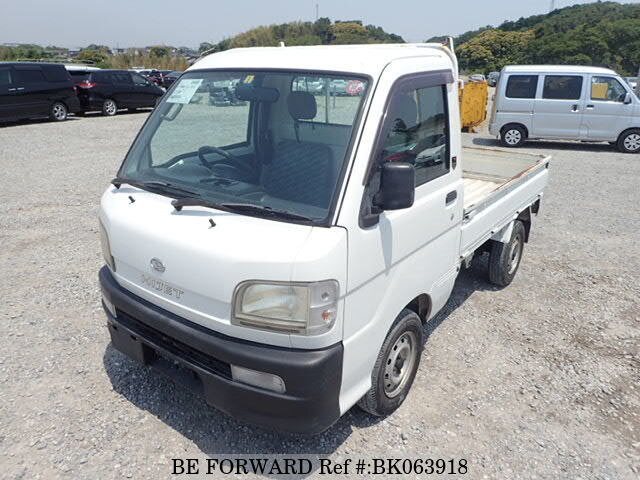 The Hijet truck experiences a minor modernization, with minor changes to a new front clip and the interior. The new KF-VE engine which is cleaner and with ten percent lower fuel consumption than the previous model engine replaces the EF-SE and EF-VE engines. 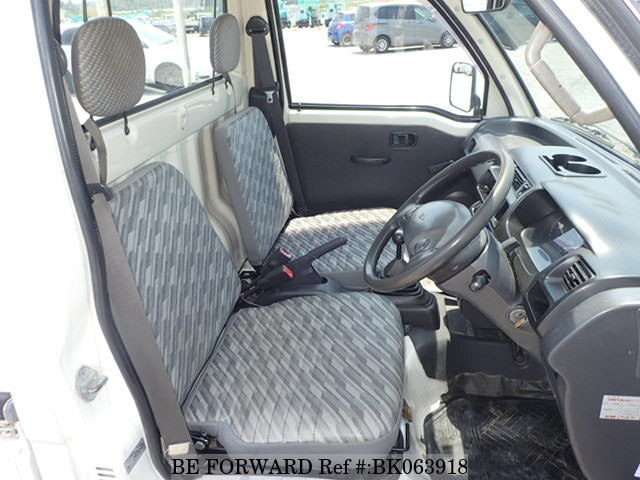 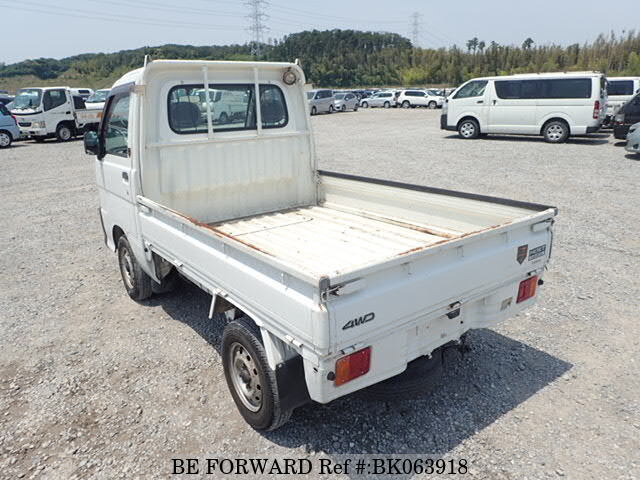 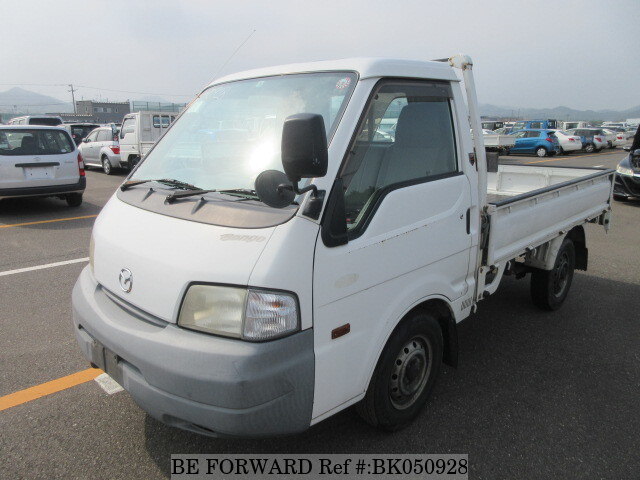 Mazda Bongo trucks available on the used market are from the fourth generation introduced in 1999 and continue to present. This generation is powered by 2 engine choices. The first is 1,798 cc inline 4 petrol that is capable of 125 bhp and 165 N-m of torque. The second is a 2,198 cc turbodiesel capable of 110 bhp and 260 N-m of torque. They are linked to the gearbox of a 5-speed manual, but a 4-speed automatic is available. The Bongo truck can be found in both 2WD and 4WD. 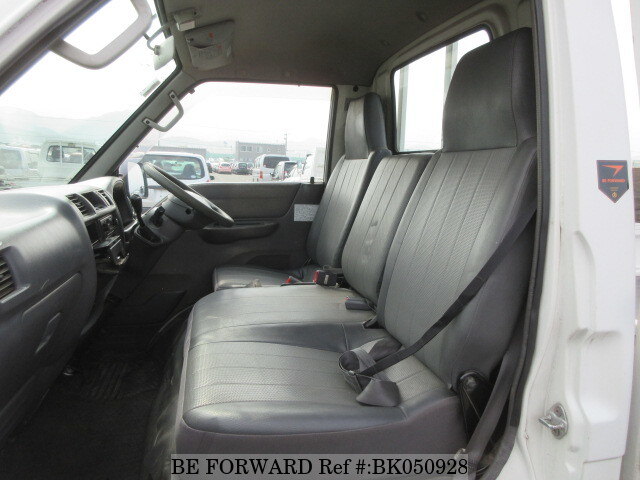 Concerning the trim level of the truck you buy, a Mazda Bongo truck can carry between 750 and 1,000 kg. In most cases, you will find a stereo system, ice-cold air-conditioning, and well-built seats. 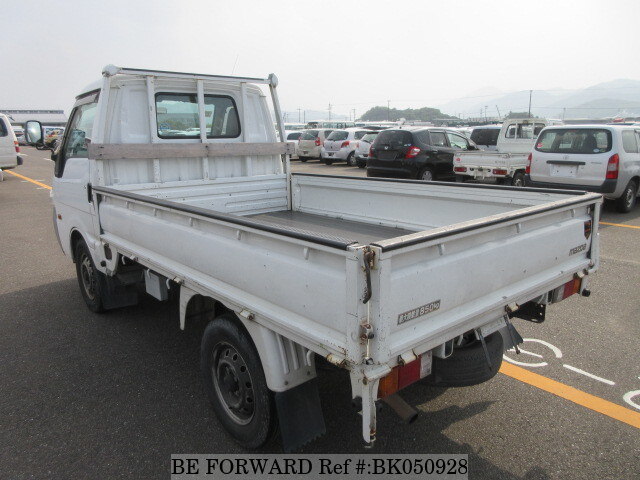 Mazda introduced the Bongo line in 1966. It has been sold as a front, rear, and mid-engine truck and van for more than fifty years over four generations. The Bongo truck is a light-duty commercial truck that is available with a tilt bed or as a panel truck, so it can meet many of your distribution needs. 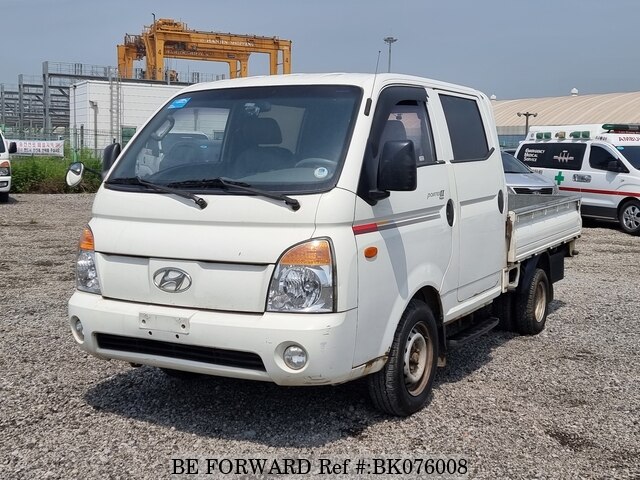 For more than 40 years since it entered the market, the Hyundai Porter pick-up truck, also known as the H100 in other markets, has delivered practicality and affordability in a well-sized package to small or medium-sized businesses. Coming in a high deck setup or a standard cab, and with a maximum capacity of carrying up to 1.3 tons, the Porter is good to encounter the various delivery needs of a wide range of industries. 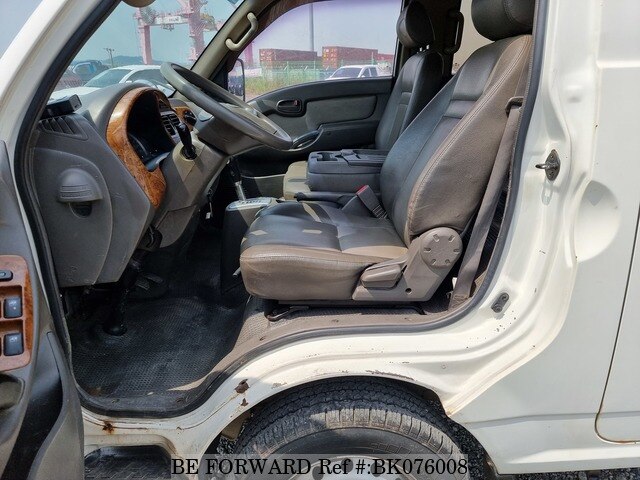 The Porters for Europe market are powered by a 2.5L I4 CRDi engine that gives out 130 hp, while those exported to Southeast Asia are mated by a 2.6L I4 diesel engine that produces 80 hp. Regardless of the market model, the Porter comes mated to a 6-speed manual transmission. From 2004 to the present, the Hyundai Porter has been in production and most of the Hyundai Porter has an average fuel consumption of 10.5 km/L. 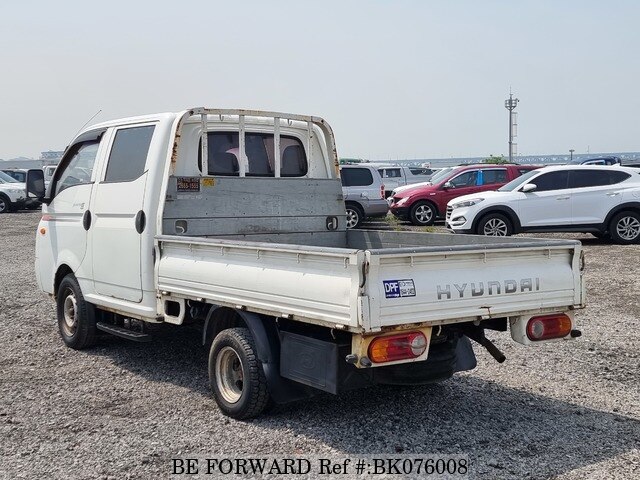 The Hyundai Porter carries the fullest of loads over the roughest road through the use of a front double wishbone and torsion bar spring and back semi-elliptical laminated leaf spring in its suspension system that gives it stability, durability, and flexibility. Most Porter’s standard safety features include an auto door lock, locking differential, 15-inch disc brakes, and side-impact bars. 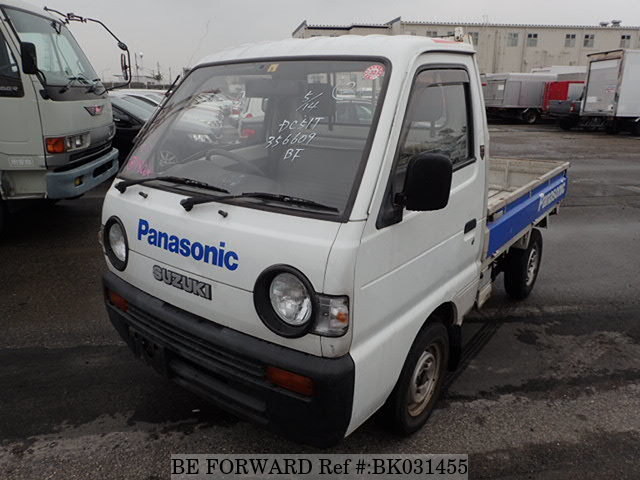 In 1961 the Japanese automobile maker Suzuki introduced the Suzuki Carry Truck. Over the past 50 years, the Suzuki Carry truck has built a good reputation for its durability and toughness. It is one of the best-selling Kei trucks in the Japanese domestic market and has appreciated a great deal of success in many global markets. 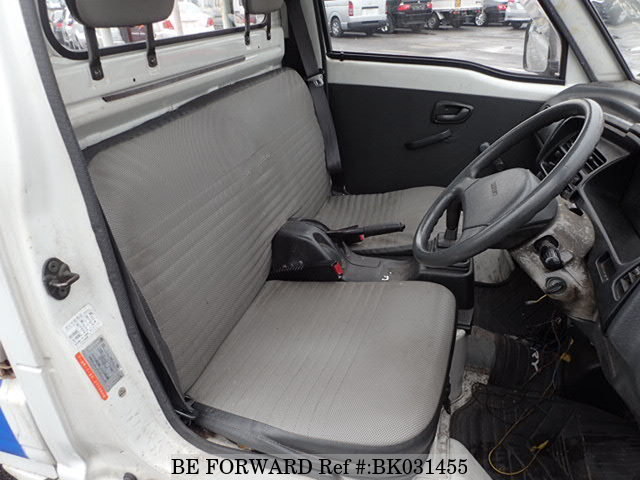 The Suzuki Carry Truck is in its 11th generation, a pure symbol that it has been a great truck for many buyers. Most of the versions on the used market are from the 9th, 10th, and 11th generations. The standard gearbox is a 5-speed manual, but a 4-speed automatic can be found in some models. 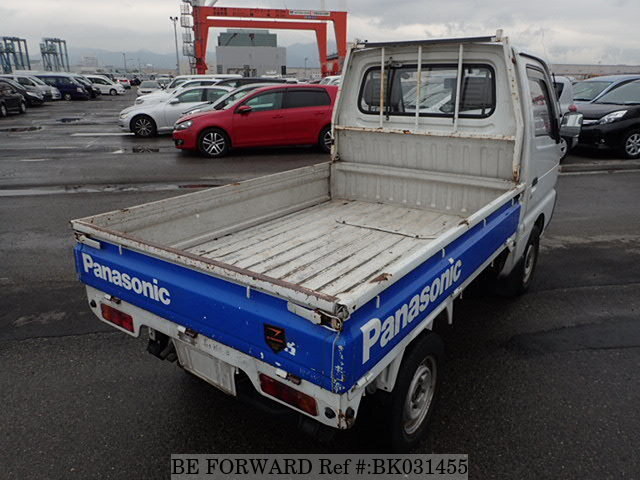 The standard configuration is front-wheel drive and the Carry truck has a carrying capacity of 350 kg. As with all purpose-built work trucks, the facilities in the Suzuki Carry truck are limited to comfortable seats, air-conditioning, and storage cubbies. It offers a tilt bed for easy unloading.

The LiteAce truck is similar to the TownAce truck with a minor difference in design that is barely noticeable. Toyota uses the same chassis and largely the same looks between the 2 models so there is not much difference between the 2. The LiteAce is one of the most successful commercial trucks manufactured by Toyota and it is still seen on roads today. 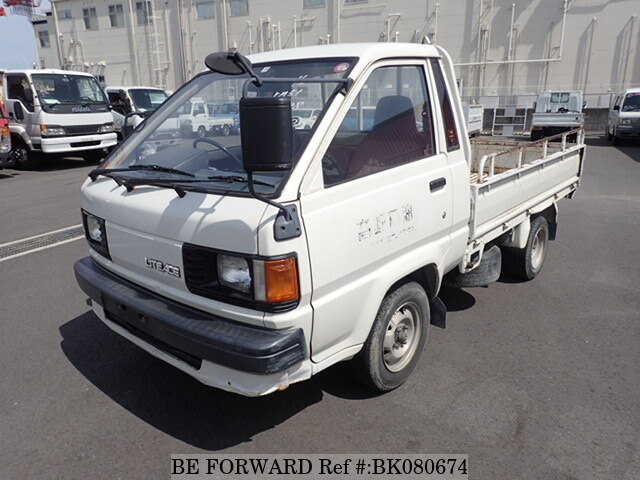 Toyota manufactured 3 generations of the LiteAce truck, which shows the vehicle’s success as a commercial vehicle. The simplistic looks do not make the pickup an eye-turner, which shifts the focus towards its reliability and performance. The positive aspect is that the LiteAce truck has a large bed that can hold tons of cargo. 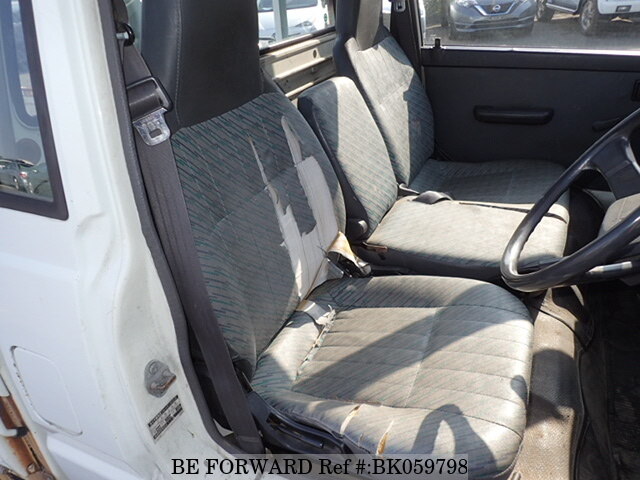 The Toyota LiteAce is somehow very comfortable on the inside. The seating position is a bit upright and the seat is not highly adjustable but even then, the comfort levels are good enough to satisfy the daily driver. The LiteAce pickup has a smooth steering wheel which makes driving very easy. The later version has extra features such as a 4-wheel drive as standard, air conditioning, and an anti-lock braking system. In terms of safety, airbags are also offered. They are not standard but buyers are given the choice to opt for added safety or forego it for a lower buying price. 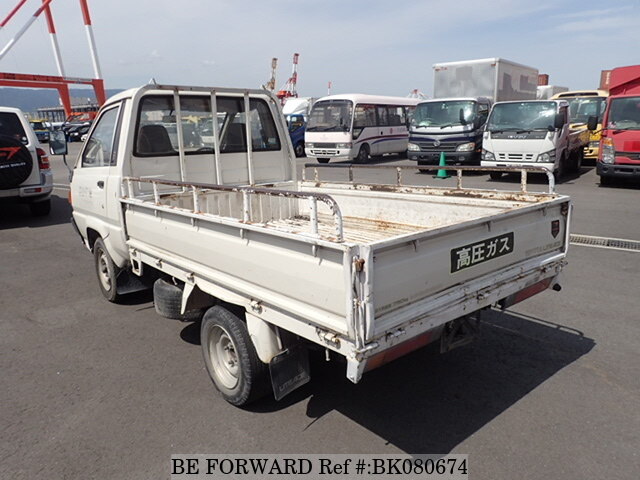 The Toyota LiteAce pickup truck had the 7 K-E 1.8-liter gasoline engines, which were later upgraded to the 3Y-U 2.0 liter. Both the engines had I4 cylinders that delivered power to either the back wheels or to the 4-wheel-drive system.

The diesel models, on the other hand, ran the incredibly potent 2C 2.0-liter powertrain, which was abandoned in favor of the 3C-E 2.2 liters.

The power from both the diesel and gasoline models went through either a 5-speed manual or an optional 4-speed automatic transmission.

These are just some of the most popular trucks that BE FORWARD has in stock. If you need more options, please visit BE FORWARD.