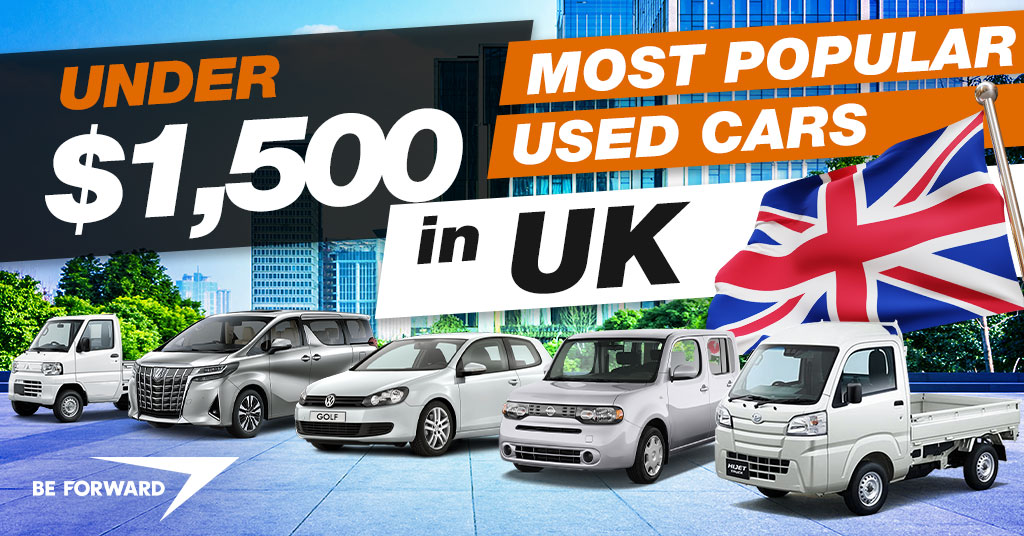 Whether it’s a used or the latest model, cars are still one of the in-demand products of our time. Both offer good performance, reliability, fuel efficiency, and quality but used cars are certainly one of the affordable of the two. And because of the pandemic, the demand is gradually rising. Now, let us check the Most Popular Used Cars in the U.K. Under $1,500.

The Nissan Serena minivan is a four/five-door vehicle also known as the Suzuki Landy which was first introduced in 1991 and is presently in its fifth generation. It is also known for its comfortable and spacious interiors with large boot space. It comes with features like driver and passenger, cruise control, vehicle dynamics control, hill start assist system, brake assist, anti-lock braking system, electronic brake-force distribution system, halogen fog lights, and traction control. It is equipped with a 2.0L MR20DD direct-injection inline-4 petrol engine producing power and torque of 129 hp (94.9 kW) at 5200 rpm, 187 Nm (138 lb-ft) at 4800 rpm paired with Xtronic CVT transmission. The Nissan Serena C26 S-HYBRID model was introduced in 2012 fitted with a 2.0L MR20DD inline-4 engine with Xtronic CVT.

The Suzuki Carry Truck is a four-wheel / rear-wheel drive, two-door Kei truck produced by Suzuki in 1961 with eleven generations and still in production. It is popular for its reliability, compact size, carrying light loads, fuel efficiency, and affordable price. It comes with standard features which include driver and passenger airbags, keyless entry, power steering, power windows, air-conditioning, an anti-lock braking system, seatbelt with pretensioners, and force limiters. It is fitted with a 658 cc R06A inline-3 petrol engine producing power and torque of 50 hp at 5700 rpm, 63 Nm at 3500 rpm, with a three-speed automatic or five-speed manual transmission.

The Toyota Voxy is the sporty version of the Toyota Noah with a seven or eight-seater produced in 2001. It is a five-door minivan with a front-wheel / four-wheel drive layout and is currently in its third generation. It offers standard features which include the Toyota Safety Sense C with lane assist, collision warning, and high beam assist as well as the Toyota’s T-Connect system with 10-inch infotainment display, online services, wireless phone charger, and rear parking camera. It is equipped with a 2.0L 3ZR-FAE inline-4 Valvematic petrol engine producing power and torque 152 PS (112 kW), 193 Nm (19.7 kgm), and 1.8L 2ZR-FXE inline-4 petrol-hybrid engine with 5JM AC synchronous motor and e-CVT.

The Honda Acty truck is a two-door, two-seater cabover Kei car first introduced in 1977 by Honda and available in mid-engine, four-wheel / rear-wheel drive. It is presently in its fourth generation and one of the most popular trucks of Honda with standard features including driver and airbags, air-conditioning, power steering, power windows, air-conditioning, keyless entry, an anti-lock braking system, and electronic brake-force distribution. The Acty truck offers a 656 cc E07Z SOHC straight-three engine producing power and torque 33 kW (44 hp), 43.52 lb-ft (59 Nm) with a five-speed manual or three-speed / four-speed automatic gearbox.

The Daihatsu Hijet truck is a front mid-engine, rear-wheel / all-wheel drive, two-door Kei truck manufactured and marketed by Daihatsu in 1960. It is presently in its tenth generation and is known for its reliability, compact size, economy, affordable price, and can be used to carry long objects or light loads. It offers standard features like driver and passenger airbags, air conditioning, power windows, 3-point emergency locking retractor seatbelt with pretensioner and force limiters, an anti-lock braking system, and power steering. The Hijet truck is equipped with a 658 cc KF-VE inline-3 engine producing power and torque 53 PS (39 kW), 60 Nm (6.1 kgm) with a three-speed or four-speed automatic transmission.

The Mitsubishi Minicab truck is a two-door pickup truck available in four-wheel / rear-wheel drive which was first unveiled in 1966 by Mitsubishi and is known for its reliability, economy, multipurpose use, and compact size that can be easily maneuvered to small roads. It is fitted with some notable standard features such as airbags, power steering, power windows, air conditioning, keyless entry, an anti-lock braking system, a seatbelt with pretensioners, and force limiters. The DA16T series of the seventh generation Minicab is equipped with a 658 cc R06A straight-3 engine and 658 cc R06A straight-3 turbocharged petrol engine with three-speed automatic or five-speed manual transmission options.

Pandemic gives us more options on how to purchase a car conveniently and safely. No need to go on tour to the nearest car dealership, with the use of phones, laptops or PC you can browse the internet for the car you are looking for. You can check the BE FORWARD store for the reliable, practical, fuel-efficient, and affordable car you want.