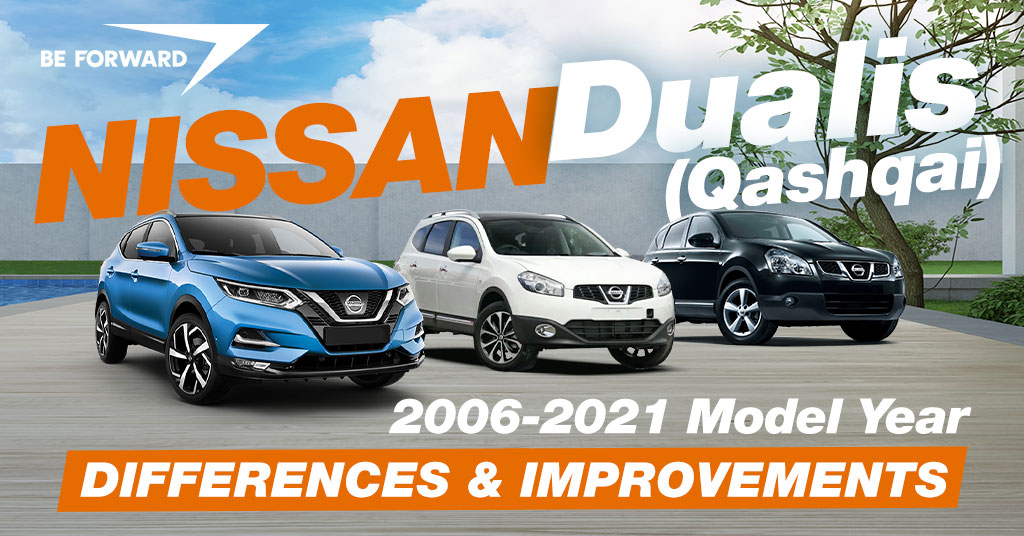 Nissan came up with the name “Dualis” as a reference to a car that was intended to sit between hatchbacks and boxy SUVs to cater to those buyers who want a little of both. And this car was the pioneer of this segment. But the Dualis was also known as the “Qashqai” which refers to the nomadic Persian tribe known as the ‘Qashqai’, who reside in the mountainous areas of Central and Southwestern Iran.

With the Dualis (Qashqai), Nissan came up with this dynamic design, to target buyers who like the traditional hatchbacks but are not lured by the large and aggressive nature of an SUV.

The Dualis was released in 2006 as a 2007 model. With the Dualis, Nissan marked a new beginning in the world of SUVs – The Dualis is the model which started the craze for high-sitting family cars, which, despite having the looks of off-roaders, they don’t come with their high running costs. It’s a good blend of the practicality and high driving position of an SUV but with running costs of a family hatchback, offering the best of both worlds.

The first Dualis (Qashqai) as the one pictured above, which was sold from 2007 to 2013 was a good car. It was available in four different trims for the Japanese Domestic Market (JDM) which are the 2.0G, 2.0S, the 2.0G Four, and the 2.0S Four, while in other markets where it was sold as the Qashqai, it was also available in four trims that followed the Nissan standard trim pattern which starts with the entry-level Visia, followed by the Acenta, then by the Qashqai 360 and lastly the top-of-the-range Tekna.

This generation Dualis is full of substance and style, with the top-of-the-range Tekna models offering options such as seven seats and four-wheel drive. You can also opt for the long-wheelbase seven-seat model Qashqai +2 for that extra practicality.

The interior of the Dualis is ergonomically designed with features such as a dash, center console, and door panels covered with a soft-touch rubbery plastic finishing which is durable and cannot be easily scratched. The dashboard is simple, functional with a clear and easy-to-read instrument panel, and a five-inch touchscreen for audio on the center console.

Storage options include a glove box, door pockets with bottle holders, a deep central bin, and two cup holders on the center console with one of them capable of swallowing a 1.0-liter water bottle.

The high driving position, rake and reach adjustment, and all-around visibility are good additions for the driver’s comfort. The front and rear seats are comfortable with good support, legroom, and headroom.

The Dualis has a 410-liter boot. Access to the boot is via a wide opening door, and the load area is flat making loading and offloading easy. The boot can extend to 860 liters by folding the 60:40 split-folding rear seats.

In 2010 the Dualis received a mid-life cycle refresh that boosted its image. Areas that were touched include the front end which received new headlights with daytime running lights, a refreshed hood, and the latest v-motion grille, the front fascia featured a new dynamic look that was far more appealing for customers, while the rear end was fitted with LED taillights.

Basic equipment received some improvement with features such as Bluetooth connectivity becoming standard. The onboard car information system came with a white LCD screen between the speedometer and the tachometer.

The Dualis is widely available with two engine choices, which are the 1.6-liter (HR16DE) and the 2.0-liter MR20DE engines, the latter being the most common. The drivetrain is either Front-Wheel Drive (FWD) or All-Wheel Drive (AWD) with power transferred to the wheels via a five-speed manual, six-speed manual, six-speed automatic, or CVT transmission.
In other markets, there are optional diesel engines which are the 1.5-liter (K9K) 1.6-liter (R9M), and the 2.0-liter (M9R) inline-4 engines.

In late 2013 Nissan unveiled the second generation of the Nissan Qashqai J11 as a 2014 model. The J11 is larger compared to the outgoing J10 and is based on a new CMF-CD platform on which the Nissan X-Trail and the Rogue are also based.

The J11 exterior looks are serene with good trim levels, and full LED lights are offered on the higher trims.

The interior of the Qashqai J11 is spacious, neat, and well designed. It combines common-sense solutions with innovative technologies to conquer daily challenges. Its seats are built with advanced medical scanning techniques inspired by NASA, which analyze blood flow and pressure on the lower back of seated passengers. The J11 has enough legroom for all occupants, as well as plenty of headroom.

In 2018 Nissan gave the Qashqai J11 a mid-cycle facelift to boost an already bestseller. Exterior changes included an integrated front bumper with engine cooling vents on either side, a new Nissan “v-motion” grille with two new optional Nissan badges, and new headlamps with redesigned boomerang DRLs.

The Qashqai J11 is fitted with several standard safety features such as forward collision warning, auto emergency braking, and lane departure warning. Rear parking sensors and reversing camera are standard as well as it was on the J10.

Under the hood, the Qashqai J11 comes with an option of three turbocharged (1.2-liter HR12DDT, 1.3-liter HR13DDT, and 1.6-liter MR16DDT) and two 2.0-liter naturally aspirated (MR20DE & MR20DD) petrol engines, and two (1.6-liter R9M & 1.7-liter R9N) diesel engines. These engines are mated with either a six-speed manual, seven-speed Getrag DCT, or a CVT transmission.

In February 2021 Nissan unveiled the third-generation Qashqai J12. The Qashqai J12 is slightly larger than the Qashqai J11 with a superior length, width, height, and wheelbase.

Like the Qashqai J11, the J12 is also built on the CMF-CD platform. The J12’s doors, front fenders, and bonnet are made from aluminum, while the tailgate is made from composite which helped reduce the overall car weight.

To improve visibility, the Qashqai J12 is built with thinner A-pillar’s, and its wing mirrors are mounted on the doors rather than the A-pillar. The interior space of the J12 has grown significantly as a result of its growth in exterior dimensions, and with that, the car offers better rear knee room, headroom, and the trunk has grown by 50 liters.

Inside, Qashqai J12 is fitted with a 9-inch touch-screen infotainment system and a 12.3-inch TFT display in the instrument cluster. Another new on the J12 is the 10.8-inch Head-up Display that displays all the necessary car information on the windscreen.

Under the hood, the Qashqai J12 comes with a turbocharged 1.3-liter inline-4 (HR13DDT) DiG-T mild-hybrid (1.3L 12V ALiS) petrol engine mated to either a 6-speed manual or a CVT transmission, with All-wheel-drive as an option.

An optional e-Power hybrid powertrain is also available. The system combines a turbocharged 1.5-liter (MR15DDT) inline-3 petrol engine with an electric motor, a power generator, and an inverter.

In 2007, Nissan unveiled the Nissan Dualis/Qashqai which turned to be a surprise on the market. This turned out to be a revolutionary car for the Japanese carmaker, who offered the compact SUV as an option for the much smaller hatchbacks and the compact station wagons. It proved to be a great move as the Dualis/Qashqai immediately became one of Nissan’s best-selling vehicles, but also a best seller in its segment. And through its three generations and over 3 million units sold, the Qashqai has proved to be a reliable and trustworthy partner for its customers.

Please visit BE FORWARD we have a list of 100+ Nissan Dualis and 30+ Nissan Qashqai on our current stock of used cars in great condition for sale.