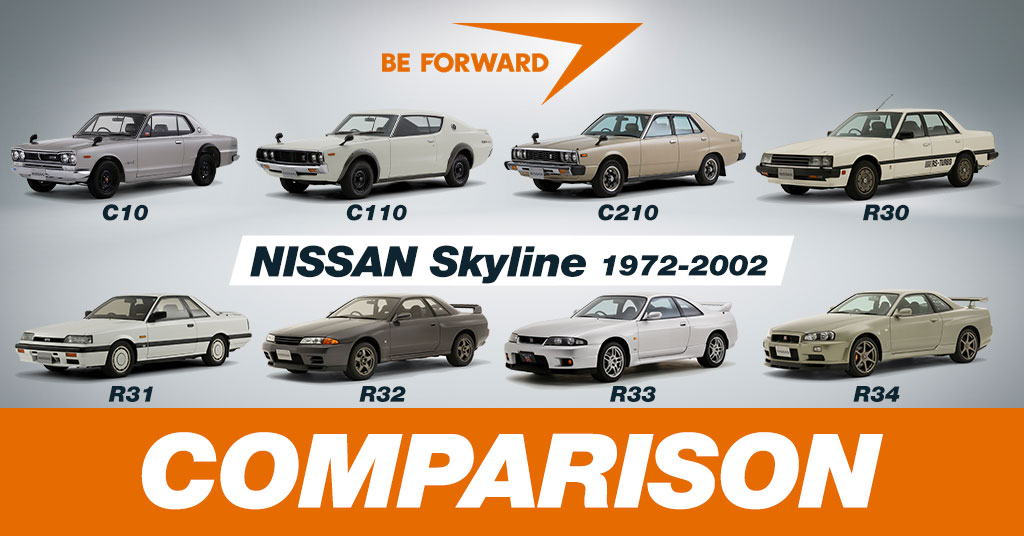 The SKYLINE brand is one of the Japanese passenger cars that is rich in history and it all started in 1957. This history spans 13 generations of SKYLINE, with the last model released in 2014. But for the fans, the 3rd generation (1963) to the 10th (1998) generation of SKYLINE are worth the attention as these are the ones that built the reputation as racing cars. In this article, we will take a look at those models.

The Nissan Skyline was earlier available in 2 body styles, the four-door sedan and the five-door wagon (estate). Later in 1970, a 2-door Coupe was added to the lineup.

This third iteration of the Skyline will mark the beginning of the now-famous GT-R name which later became an independent model not part of the Skyline. This model is famously known as the Hakosuka with ‘Hako’ meaning box in Japanese and ‘suka’ being the short form of Skyline pronounced ‘Sukairain’ in Japanese.

The interior of the Hakosuka is simple with analog gauges, bucket seats, and a center console with a radio and fan controls.

In 1972, the fourth generation of the Skyline, the C110, was released. This model continued where its predecessor, the C10 ended. Similar to the C10, this model was also available as a 4-door sedan, 2-door hardtop coupe, and 5-door wagon. On export markets, the C110 also known as the ‘Kenmeri’ was sold as a Datsun 160K, 180K, and 240K. The C110’s design and styling were a bit fancy compared to that of the C10, and that is more evident on the wagon. The C110 will also be the first model to be released with the now traditional Skyline round rear brake and tail lights. It is/was a good-looking car with bold swept-back lines that one can feel that the designers were inspired by the American muscles of the ’60s and ’70s.

The C110 was available as a 1.6-liter, 1.8-liter, or 2.4-liter. The engines used were the 4-cylinder 1.6-liter SOHC G16 engine that produced 100 HP, the 1.8-liter G18 engine is similar to the one used on the C10, and the 6-cylinder SOHC L24 engine that produced 130 HP. These engines transferred power to the wheels via a 3-speed automatic and 3 to 5-speed manual. Underneath, the C110 was fitted with semi-trailing ring arm suspension, front and rear disk brakes, front and rear spoilers with wheel-arch extensions. These features made it a proper street racer.

The body styles on offer remained the same with a sedan, coupe, and wagon.

The sixth generation Skyline was released with a change in model naming. The R30 Skyline arrived in 1981. Like in the previous releases, this release also came in three body options, the wagon, coupe, and sedan, but unlike the C210 and the previous models that featured an elongated front end on the 6-cylinder model, the R30 had both the 4-cylinder and 6-cylinder having the same length. The R30 featured 26 variations which deployed several 4 and 6 cylinder engines, with the common ones being the turbocharged 6-cylinder 2.0-liter SOHC L20ET engine that produces 140 HP and the turbocharged 4-cylinder 2.0-liter DOHC FJ20ET engine that produces 190 HP. Other engines on offer were the 4-cylinder 1.8-liter Z18S and CA18E, the 2.0-liter Z20E, FJ20E, and the 6-cylinder 2.0-liter L20E, 2.4-liter L24, and 2.8-liter L28. At this stage also is when Nissan made rear and front disc brakes as standard on all future Skylines.

The evolution of the Skyline saw the release of the R31 in 1986. As an evolved R30, the R31 came with a much longer body, but the body styles remained the same. With the R31 Nissan introduced new engines, the RB-series engines also known as the ‘red-tops’ due to having a red camshaft top cover. The R31 came with a host of new technologies such as the Nissan Induction Control System (NICS) which was later replaced by the Electronically Concentrated Control System (ECCS). Another technology used on the R31 is the High Capacity Active Steering (HICAS) four-wheel steering system.

Standard Skylines were fitted with a 4-cylinder 1.8-liter CA18i that produces 91 HP and five variations of the 2.0-liter straight-six RB20 with or without a turbocharger ranging from 93 HP – 210 HP.  These engines were attached to a 5-speed automatic or manual transmission.

The year is 1989 and a new Skyline R32 aka ‘the Godzilla’ model is released. The R32 Skyline is available only as a 2-door coupe or 4-door hardtop sedan, with the wagon dropped. With the release of the R32, the RB-series engines received some improvements in the name of better injection systems and cylinder heads. The standard R32 GXi came with a 4-cylinder 1.8-liter SOHC engine that produces 90 HP, the GTE model came with a 6-cylinder 2.0-liter RB20E SOHC that produces 120 HP, the GTS model had four 2.0-liter and two 2.5-liter engines ranging from the 6-cylinder 2.0-liter RB20DE DOHC to the 6-cylinder 2.5-liter RB25DE DOHC engine that produces 150 HP and 210 HP respectively. The top of the range R32 GT-R was an AWD with a HICAS 4-wheel steering system and came fitted with a twin-turbo 6-cylinder 2.6-liter RB26DETT DOHC producing 270 HP. There were also other variants with higher performances available. These engines transferred power to the wheels via a 4/5-speed automatic or 5-speed manual transmission.

The taller, longer, wider, and heavier R33 Skyline was released in 1993. Like the R32, the R33 was also available in 2 (sedan & coupe) body styles. Unlike previous Skyline models, the R33 featured only 6-cylinder engines. The R33 received better safety scores than its predecessors, thanks to the addition of airbags and internal crash bars that made it much safer.

The standard R33 was fitted with a 6-cylinder 2.0-liter RB20E; it also offers two choices on the 6-cylinder 2.5-liter GTS range featuring a naturally aspirated and turbocharged RB25DE. The R33 GT-R was fitted with the same 6-cylinder 2.6-liter RB26DETT as the R32 and produced the same power too, only with a slight improvement in torque as a result of changes in the intercooler, turbo compressor, and dump pipe. The R33 came with either a 5-speed manual or automatic transmission.

In 1998, Nissan released the Skyline R34. After studying the previous models Nissan produced the nonpareil Skylines with new technology and updated economical NEO engines. The base R34 was fitted with the RB20DE NEO engine that produced 150 HP. Other NEO engines available were the RB25DE and the RB25DET, the RB25DE came fitted in the 25GT/GT-V, GT-X, and 25GT/GT-X-Four models which produce 197 HP. The GT-T/GT-X models were fitted with the RB25DET engine which produces 280HP. The R34 GT-R had a revised chassis but continued using the RB26DETT with upgraded turbos. These models made use of 4-speed automatic and 5-speed manual transmissions and a 6-speed (Getrag 233) manual transmission for the GT-R.

The R34 featured a sleek design with Xenon headlights as standard. The driving pedals are made of aluminum, with the steering wheel and gear shift knob covered in a 2-tone genuine leather.

The Skylines after attaining their status and winning 50 championship racing have almost had a cult following, and people are still buying them as collector’s items, but also to get the chance to feel and enjoy their wrath. You can buy one yourself from BE FORWARD. All the best!