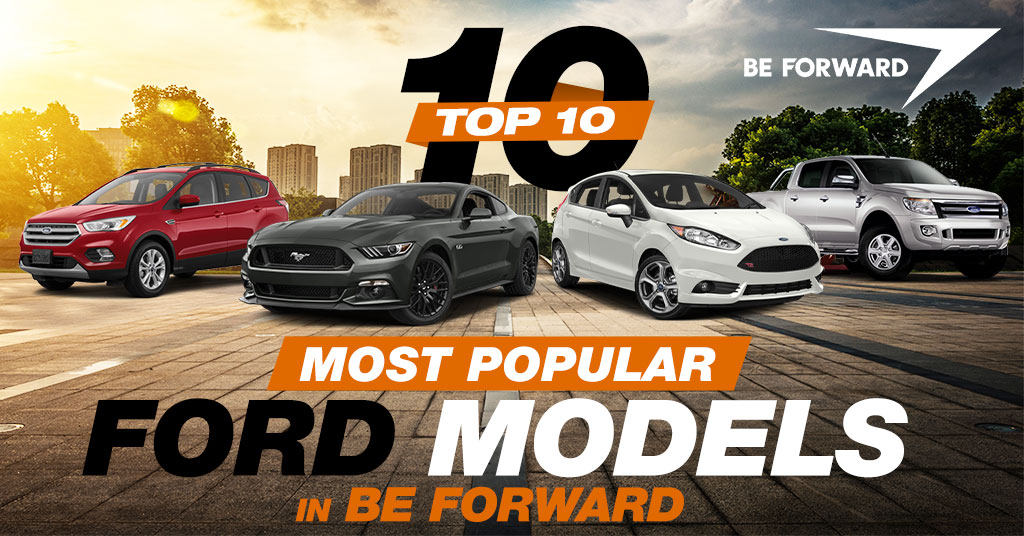 Ford Motors is an American company that manufactures cars. Ford was incorporated in 1903, and since then has been making cars in various parts of the world and has sold millions of them qualifying it as one of the largest car manufacturers in the world.

We at BE FORWARD have a vast list of used Ford models for sale, in this article, we will focus on 10 of the most popular Ford models that we sell by briefly taking a look at their features.

The Escape is a compact crossover SUV manufactured by Ford. The Escape was launched in the year 2000 and is still in production with the fourth-generation model released in 2019.

The interior of the Escape is spacious with enough space to accommodate its five passengers comfortably. The seats of the Escape are covered in cloth upholstery as standard, with high-end trims having optional features such as heated front seats, leather upholstery, and a  power-adjustable driver seat.

The Ford Explorer is an SUV manufactured by Ford Motors. The Explorer was launched in 1991 and is still in production to date, currently on its sixth generation released in 2019.

The Explorer is a three-row seven-seat SUV. The first and second-row seats of the Explorer provide sufficient legroom and headroom enough for tall occupants to sit comfortably. The third-row seats are suitable for children as they have limited legroom and headroom.
The Explorer’s cabin is handsomely designed with its upper trims benefitting from many quality finishing materials.
Standard features on the Explorer include a 4.2-inch infotainment screen, a CD player, a rearview camera, Bluetooth connectivity, and a USB port. Optional features include an 8-inch touch screen with Ford’s SYNC 3 operating system, Apple CarPlay, Android Auto, rear-seat DVD screens, navigation system, and satellite radio.

The Ford Ranger is a mid-size truck with pick-up abilities manufactured by Ford Motors. The current Ranger T6 was introduced in 2011 and is still in production.

The Ranger is available as a Single-Cab with two doors and two seats, a Super-Cab with two full-size front doors, and two small (suicide) rear doors and four seats, and a Double-Cab with four full-size doors and five seats.
The front seats are comfortable and roomy in all three models, but the double-cab is the most popular especially due to its ability to accommodate extra passengers in the back seat. The rear seats of the Double-Cab have enough room for adults at the rear seats, while the Super-Cab rear seats are a bit cramped.
The Super-Cab has a 6-foot bed while the Double-Cab has a 5-foot bed.

Ford Kuga is a compact crossover SUV manufactured by Ford Motor since 2008. Originally the Kuga was meant for the European market but in 2012 Ford introduced the Kuga in America as Ford Escape.

The first generation Kuga is stylish, while the second generation is bigger and bolder. The front fascia of the second generation Kuga features a simple and bold hexagonal grille which makes the Kuga more visible.
The Kuga is a five-seat car with a cabin designed to make it a practical and comfortable five-seater. The front seat occupants have enough legroom and headroom, while the rear seats have limited legroom and knee room.
The Kuga has a 456-liter boot with seats up, which expands to 1653 liters with the seats folded flat.

The Kuga comes fitted with a choice of several engines as listed below;

The engines transfer power to the wheels via a 6-speed manual or 6-speed automatic transmission.

The Ford Ranger is a full-size pick-up truck manufactured by Ford Motors since 1948. The F-150 is Ford’s biggest-selling vehicle, with its fourteenth-generation model launched in 2021.

The F-150 Single-Cab model seats three people, while the Super-Cab and the Double-Cab models can accommodate up to five or six people. The F-150 comes with the option of vinyl, cloth, or leather upholstery depending on trim. Other optional features include a heated steering wheel, heated, and cooled front seats, power-adjustable, and massaging.
The front seats of the F-150 are supportive, comfortable, and wide.

The 2015 F-150 comes with an option to choose between new two and two carried over power plants as seen below;

These engines are mated with a 6-speed automatic transmission.

Ford Focus is a compact hatchback manufactured by Ford Motors from 1998 to the present. The fourth-generation Focus was released in 2018.

The Focus is a five-seat car with two rows. The front seats are spacious and comfortable with enough legroom and headroom, while space on the rear seats is limited, so tall passengers will feel squeezed. The Focus cabin is very well designed, and the finishing is done with high-quality materials. Optional features found on higher spec models include heated front seats, a heated steering wheel, and leather upholstery.
Standard features in the Focus include Ford’s SYNC infotainment system with a 4.2-inch display, two USB ports, Bluetooth connectivity, voice recognition, and a four-speaker audio system.  High-end models get extra features such as Ford’s SYNC 3 infotainment system with an 8-inch touch screen, remote start, a 10-speaker premium audio system, satellite radio, HD Radio, navigation, and dual-zone automatic climate control.

The Ford Mustang is a highly styled sporty coupe (pony car) manufactured by Ford Motors launched in 1964 and still in production. The fifth-generation Mustang was released in 2015.

The sixth-generation Mustang debuted in 2015 with some modernization while maintaining its heritage cues. The Mustang is available as a convertible or a fastback.
The Mustang is a four-seater, with two seats in front and two at the rear. The front seats are supportive and comfortable with enough head- and legroom. The rear seats have limited space, they are suitable for kids. In general, the Mustang has a handsomely designed cabin finished with quality material.

The Mustang comes fitted with one of these four engine options:

The Ford S-Max is a mid-size multipurpose vehicle (MPV) manufactured by Ford Motors. The production of the S-Max is currently in its second generation that commenced in 2015.
The S-Max is available in three trim levels. The base Zetec trim, the mid-range Titanium, and the high-end Vignale.

The S-Max comes with a choice of three engines to choose from:

The Ford Sport Trac is a mid-size pick-up truck manufactured by Ford Motors. The Sport Trac was produced from 2000 to 2010.

The Sport Trac looks like a Ford Explorer SUV cut at the rear to create a pickup truck. And that is almost the case only that the Sport Trac is 17 inches longer. The Sport Trac is a five-passenger truck with a 4.5-foot cargo bed made of dent- and rust-proof plastic.
Standard features of the Sport Trac include satellite radio, a stereo with a CD player, and an auxiliary input jack. Optional features include heated front seats, leather seats, navigation, dual-zone climate control, a power-adjustable driver’s seat, a rear-seat entertainment system, and a power sunroof.

The base 2008 Sport Trac is fitted with a 4.0-liter (Cologne) V6 with 210 hp, while an optional 4.6-liter (Modular) V8 with 292 hp is also available.
These engines are mated with a five-speed or six-speed automatic transmission with the option of two-wheel drive or four-wheel drive.

The Ford Fiesta is a hatchback manufactured by Ford Motors from 1976 to the present.
The Fiesta is available as a 3-door or 5-door and in four trims, the S, SE, Titanium, and ST.

The Fiesta is a five-passenger car with the best seats upfront. There is enough leg- and headroom at the front, while at the rear space is so limited.
The steering is impressive and handling great, the Fiesta is indeed fun-to-drive.
The Fiesta, depending on trim, comes fitted with SYNC or SYNC 3 infotainment systems. The SYNC 3 system comes with a touch screen and enhanced smartphone integration via ApplePlay or Android Auto, an extra USB port, and Siri Eyes Free, while the SYNC system features Bluetooth connectivity, USB connections, and a voice command system for compatible devices.

Under the hood the Fiesta comes with a choice of three engines to choose from;

We have taken a look at 10 Ford models, and we can all agree these are all great cars, with great engines, and features. Ford has a reputation for making incredible cars and that can be witnessed in the models we have reviewed. Please visit BE FORWARD to find your Ford from our extensive list.