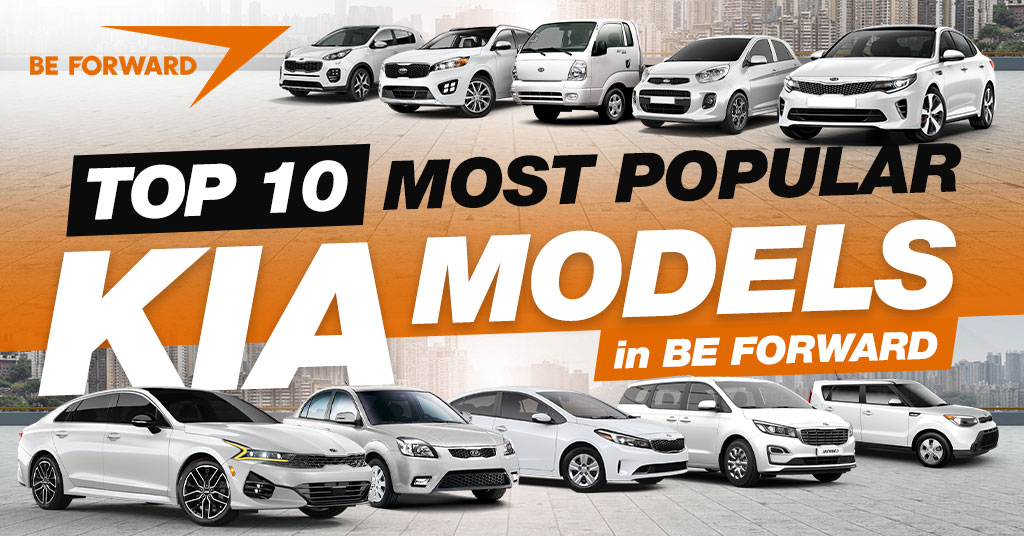 KIA is a South Korean brand that has manufactured cars since the early 1980s’. The earlier KIA models had a reputation of not being so reliable, but gradually they kept improving and recent models have been highly rated by various respected industry sources as some of the most dependable, reliable, and robust cars that deserve your trust.

In this article, we will take a look at 10 of the most popular KIA models sold by BE FORWARD just to brief you the reader or future buyer on what makes these cars top sellers. Please read on

KIA Sportage is a compact crossover SUV that has been manufactured by the Korean company KIA Motors since 1993. In 2015 the fourth-generation Sportage was released.

The Sportage is a five-door five-passenger car. Its front seats are comfortable, and the driver has good visibility. At the rear there is ample room, providing enough headroom and legroom, even for the tallest of passengers. The Sportage has a quiet cabin that is all-around lovely, and the rear seats can also recline.

KIA Sorento is a midsize SUV built by the South Korean car manufacturer KIA Motors since the year 2002. The Sorento has evolved over the years and is now in its fourth generation.

The exterior of the Sorento is appealing and makes it stand out from the SUV crowd.

The Sorento’s interior is upscale featuring a touchscreen infotainment display housed in a silver-trimmed housing, while the instrument panel features a large speedometer at the center flanked by a full-color multifunction display.
The Sorento is available as a seven-seater with three rows or a five-seater with two rows.

KIA Bongo cabover pickup truck manufactured by Korea car manufacturer KIA Motors since 1980. The Bongo is currently in its fourth generation which began with the 2005 model.

The Bongo is a two-door three-seat van with a very neat and spacious cabin.
The dash is very simple; it features a very basic radio, three rotary control knobs for A/C, and a 12v inlet. The binnacle features two large round meters for speed and tachometer, two small round meters for the fuel gauge and coolant temperature, and two small digital displays for clock and trip meter.

The KIA Morning/Picanto is a small and affordable city (mini) car manufactured by KIA Motors. The Picanto is a cheap and cheerful five-seat four-door car that has been around since 2004 and is now in its third generation, released in 2017.

The entry-level Picanto is so basic, it features a two-speaker stereo system and central locking, while the mid-range trim is better equipped with features such as Bluetooth connectivity, air conditioning, a leather steering wheel, and alloy wheels as standard.

The KIA Optima is a midsize four-door sedan built by the Korean company KIA Motors. The fourth-generation Optima was released by the end of 2015.

The Optima is sporty with several details that add finesse to its profile, along with edgy and crisp details. It has a lot of charm.

The Optima has a spacious interior in its class with a business-like theme. The instrument cluster features a big set of round gauges and a wide bank of controls tilted towards the driver. Other features include a 4.3-inch TFT infotainment screen; high-end models get an 8-inch touch screen with navigation.

The seats have good contouring, with power controls that give room to greater adjustability. High-end models come with Nappa leather upholstery, heated and cooled front seats, and heated back seats. This is like a bonus as these features are typically never available on affordable midsize cars such as the Optima.

The KIA K5 is a four-door five-seat mid-size sedan built by KIA Motors Korea. The KIA K5 replaced the KIA Optima with the release of the second generation in 2005.

The K5 has evolved with the 2021 model being slightly longer, lower, wider than the car it replaces.

The exterior of the Optima is well proportioned and the body is curvier. It features a coupe-like roofline that gradually descends to afford rear-seat occupants with enough headroom. The overall dimensions of the K5 are elongated to give it a sportier, rear-drive profile.

The interior is spacious, well finished, with comfortable and well-designed seats, and some luxurious finishes. The dash is placed further forward increasing outward visibility.

The Kia Rio is a subcompact car manufactured by KIA Motors in South Korea. Earlier models were known as KIA Pride which were rebadged versions of Ford Festiva and Avella. The Pride was sold from 1987 to 2000, while the Rio arrived in 1999, and is currently in its fourth generation.

Rio’s cabin is built with quality materials and elegantly designed. The front seats are supportive and spacious. The rear space is enough to accommodate three adults, but tall people might struggle for legroom.
Standard interior features include a radio with a CD player, satellite radio, an auxiliary input, a USB port, steering audio controls, and a tilt steering column. Extra features include a telescopic steering wheel, Bluetooth, cruise control, power windows, a voice-activated UVO infotainment system, keyless entry, a rearview camera, a leather-wrapped steering wheel, and a moonroof.

The Rio comes fitted with a 1.3-liter, a 1.5-liter, or 1.6-liter inline four-cylinder engine; these engines offer plenty of power for city driving and have no trouble overtaking vehicles on the highway. They are mated to a six-speed manual or six-speed automatic transmission. The average fuel consumption of the Rio is 13.6 km/l or above.

The KIA Forte is a compact car manufactured by KIA Motors whose production began in 2008.

The Forte’s cabin is simple, featuring straightforward displays, a clean layout, and an effective infotainment system. The cockpit finishing features high-grade plastics, with details nicely underplayed all over, from the tambour-covered console storage to the rotary climate control knobs.
The front seats are supportive, comfortable, and well-contoured. The rear seats can accommodate three adults, but two will be more comfortable. The seats are covered with cloth upholstery as standard, while leather upholstery, heated seats, and a ventilated driver’s seat are available as options.

The Forte comes with three optional four-cylinder petrol engines. The base model comes with a 145 hp 1.8-liter engine, with the 173 hp 2.0-liter engine and the turbocharged 201 hp 1.6-liter engine fitted on higher trims.

The KIA Carnival is a nine-seat minivan produced by KIA Motors. The production of the Carnival began in 1998 and has spanned four generations to date.

The Carnival has plenty of styles and a true people mover. Its exterior features the KIA family look with a big bold radiator grille and squared-off front. At the rear, there is a slim window design that flows nicely with a rear end that’s designed to appeal.
The cabin is spacious with enough headroom for all passengers. The seat layout differs depending on the model, but the standard layout features two front seats; three center row seats; and two more seats in the back. The center seat can be folded into a table or can be removed to give extra elbow room.

The three rearmost seats have a 60/40 split configuration, and can wholly or partially be folded completely flat creating an uninterrupted flat boot space.

These engines have average fuel consumption numbers are 8.6 km/l and 13 km/l respectively.
These engines transfer power to the wheels via a six-speed or eight-speed automatic transmission.

The KIA Soul is a five-door five-seat hatchback manufactured by KIA Motors. The Soul was first released in 2008 and is still in production to date.
The Soul is a very good car for urban maneuvers and was built for that.

The exterior of the soul features a blunt front end with a very small grille, bug-eyed headlights, while at the rear there are tall taillights that improve the car’s appeal.
The interior of the Soul is well designed featuring some soft-touch materials and comfy seats.
The Soul comes with five seats that can accommodate five adults with plenty of space in each row. The Soul comes with cloth upholstery as standard with leather upholstery as an option.

KIA has come a long way to make it this far, from being mocked to being considered, to give the established big brands of yesteryears some headache. The cars we have briefly covered are all great cars; they are worth your attention and money. Visit BE FORWARD and buy yourself a KIA and you’ll never regret it.