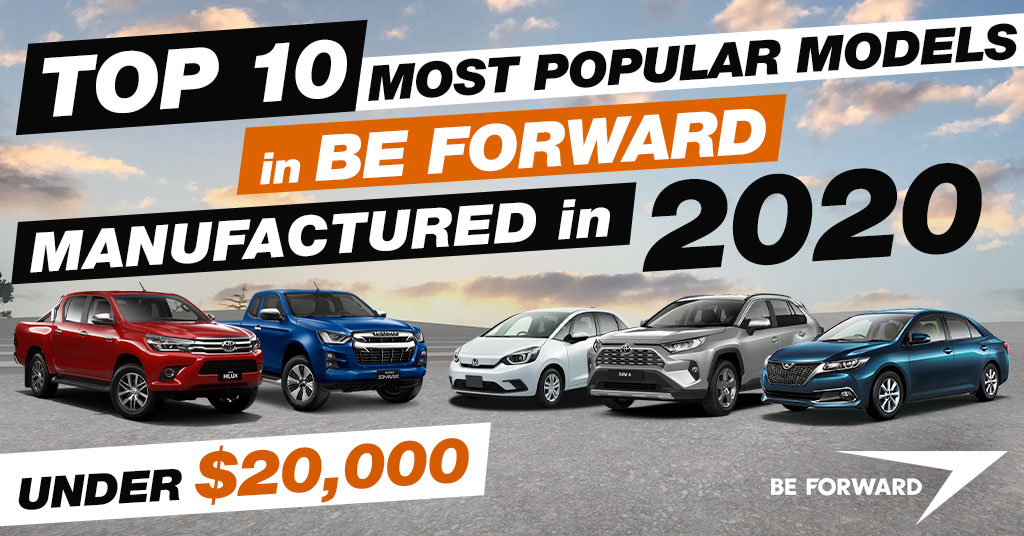 Cars come in many shapes and forms and each year new cars or brands or models, are released with others receiving their midlife updates, and others welcome new generations.

In this article, we will take a brief look at the “Top 10 Most Popular Models Manufactured in 2020” to learn what makes them popular and what determines their pricing.

The Suzuki Swift is a supermini car produced by the Japanese automotive company Suzuki. The Swift was introduced in 2004, and in 2016 a third and the latest generation model was released.

In 2020, the Swift was facelifted with changes including revised LED headlights and taillights, a revised radiator grille with a chrome bar across the middle, a dual-tone color option, and alloy wheels. Some features previously reserved for the top trim became standard. The engine was reviewed as well by reducing emission levels as required in some markets. The 1.2-liter engine comes paired with a 12-volt mild-hybrid system with an upgraded 10Ah battery.

A Swift Sports model was also introduced in 2020 for the European market. It features a turbocharged 1.4-liter (K14D) Boosterjet engine, but now with a smaller turbocharger and dual VVT. It’s based on Suzuki‘s SHVS 48-volt mild-hybrid system. Both models come with the optional ALLGRIP 4×4.

The Ford Ranger is a mid-size pickup truck produced by Ford Motor Company. In 2011, the first generation of the Ford Ranger built on the T6 platform was introduced. This model received several midlife facelifts, with the latest before the introduction of the second generation model is the 2019 facelift for the 2020 model year.

The Ranger has been available in three (XL, XLS, and XLT) trim levels and three (Regular Cab, Super Cab, and Double Cab) cab versions. The 4×4 versions are further broken down into Ranger FX4, Ranger Sport, Ranger Wildtrak, and the Ranger Wildtrak X.

A new turbocharged or bi-turbo 2.0-liter (EcoBlue) 4-cylinder DOHC diesel engine with 177 hp and 310 lb-ft of torque and 210 hp and 370 lb-ft of torque respectively was also available in 2020. This engine is mated with a 10-speed automatic transmission.

The Nissan Note is a subcompact hatchback manufactured by the Japanese automotive company Nissan. The first-generation Note was introduced in 2004, with its third and latest generation model released in 2020.

The interior cabin is very good, with plenty of head- and legroom for both front and rear-seat passengers, and ride quality is pretty good and the steering is light.

The 2020 Note is exclusively available with an electrified e-Power hybrid power train. It features a 1.2-liter (HR12DE-EM47) 3-cylinder  e-Power series hybrid in a 2WD or 4WD drivetrain. In the 4WD version one electric motor powers the front axle and another motor powers the rear axle. The system produces a total power of 167 hp and 200 lb-ft of torque.

The Subaru Forester is a compact crossover SUV manufactured by the Japanese automotive company Subaru. The first-generation model of the Forester was introduced in 1997, and currently, it’s in its fifth generation since 2018.

The interior of the 2020 Forester is upmarket, its quality has improved, as well as infotainment and ride and handling quality. Its off-roading abilities remain, with its permanent Symmetrical All-Wheel Drive system and X-Mode drive mode making it easy to maneuver on tough terrains.

The 2020 Forester is powered by a 2.0-liter 4-cylinder boxer engine with Subaru’s new e-Boxer mild-hybrid technology that powers all four wheels via an automatic or CVT transmission. The e-Boxer technology differs from the conventional hybrid systems, in that it helps to compliment the Forester’s engine and gearbox, by improving throttle response and torque.

The Suzuki Vitara (Escudo) is a crossover SUV produced by the Japanese automotive company Suzuki. The Vitara/Escudo was introduced in 1988 and is currently in its fourth generation since 2015.

The notable change in the 2020 Vitara is the introduction of FWD (front-wheel drive), with the Allgrip 4WD reserved for the top-spec version.

The 2020 Vitara is powered by a turbocharged 1.4-liter (K14D) Boosterjet petrol engine with a 48V mild-hybrid system, paired with a belt-driven Integrated Starter Generator (ISG) with 129 hp and 173 lb-ft of torque (The ISG electric motor produces 14 hp and 39 lb-ft of torque). This engine is mated to a six-speed manual or automatic transmission.

The Toyota Allion is a compact sedan manufactured by the Japanese automotive manufacturer Toyota. The first generation Allion was unveiled in 2001 with its second and latest generation released in 2007.

In 2016 the Allion received a second facelift. One of the changes includes the introduction of  “bi-beam” LED headlights and a collision-avoidance system known as “Toyota Safety Sense C”

The Allion came fitted with a 1.5-liter (1NZ-FE) 4-cylinder petrol engine with 109 hp and 104 lb-ft of torque. The engine was mated with a 4-speed automatic or CVT transmission.

The Toyota RAV4 is a compact crossover SUV manufactured by the Japanese automobile manufacturer Toyota. The first generation RAV4 was unveiled in 1994 and is currently on its fifth generation since 2018.

In 2020, the Rav4 was restyled with the old conservative looks gone, its new styling features square-wheel arches and sharp edges that stand out a mile from its rivals.

The 2020 Rav4 comes fitted with a  plug-in hybrid system that combines a 2.5-liter petrol engine with a pair of electric motors and an 18kWh lithium-ion battery. The system produces a combined output power of 300 hp.

The Honda Fit/Jazz is a small car manufactured by the Japanese company Honda. The Fit was unveiled in 2001 and is currently in its fourth generation since 2019.

The Fit is available in four trim levels starting with the base SE model, followed by the mid-spec SR, then EX, and the top-spec EX Style. Standard features on the base SE model include automatic air-con and adaptive cruise control. The SR trim adds a larger 9-inch infotainment screen. The EX adds a heated steering wheel, heated front seats, sat-nav, rear privacy glass, and 16-inch alloy wheels, while the top-spec EX Style adds a two-tone roof and black exterior trim.

The Isuzu D-Max is a pickup truck manufactured by the Japanese company Isuzu Motors. The D-Max was introduced in 2002 and is currently in its third generation from 2019.

The 2020 D-Max has more modern looks, decent levels of kit, and appealing low prices. Notable exterior features include the double-fang front grille that gives the car an aggressive look.

This 2020 model still utilizes the body-on-frame chassis, but it’s now rigid and lighter than before. The switchable four-wheel-drive is carried over from the previous model, it allows you to select between rear-wheel drive or 4WD (high and low-range), with a rear differential lock as standard, making it a very good off-roader.

The 2020 Hilux has a larger infotainment screen with Android Auto and Apple CarPlay, apart from that, there are no changes tech-wise, which include a USB port, two 12V sockets, and a household power socket in the center console.

Although the Hilux is rated as one of the safest pickups, the 2020 model comes with upgraded safety in the form of Toyota Safety Sense intelligent technology​ which features the Pre-Collision Safety system and speed signs alert.

The 2020 Hilux comes with an upgraded 2.8-liter (1GD-FTV) 4-cylinder diesel engine with 201 hp and 369 lb-ft. This engine is paired with a six-speed manual or automatic transmission. With this new engine, the Hilux is capable of towing a maximum of 3.5 tons.

We have reviewed the 10 Most Popular Models in BE FORWARD manufactured in 2020. These are all great cars, but one thing that they have in common is that they are modern, stylish, reliable, durable, and dependable. Each car is performing very well in its category.

We at BE FORWARD have stocked most of these cars as used models on sale. Please visit our online stock to find your next car.