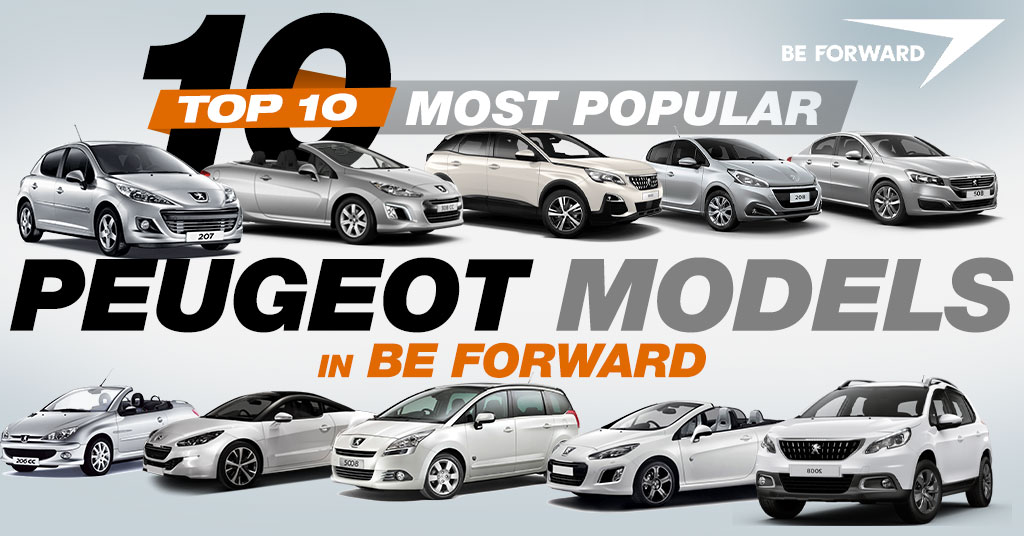 Peugeot is a French automotive company that began manufacturing cars in 1899. Peugeot is an established brand in the automotive industry where it has made a name for itself and received numerous awards from 1985 to 2018.

In this article, we are going to take a brief look at 10 of the most popular Peugeot models in BE FORWARD. Please read on to find out.

The Peugeot 207 is a three or five-door hatchback produced by the French automotive company Peugeot. The 207 was introduced in 2006 and lasted until 2014 when it was replaced by the 208.

The 207 is a well-crafted small car from Peugeot. Its interior is well equipped, roomy, and attractively styled.
The 207 offers a good driving experience supported by a comfortable ride and decent steering. The 207 is a good value for money, safe, and cheap to maintain.

The 207 is available with a selection of engines, but the standard engine is the 1.6-liter (VTi) inline-4 petrol engine that produces 120 hp and 118 lb-ft of torque. This engine is mated to a five-speed manual or four-speed automatic transmission.
This engine has an average fuel consumption of 16.7 km/l.

The 207 is a four-seater, but it’s better to regard it as a two-seater as the rear seats are of no use to adults. Entry-level 207 features include air-con, electric windows, USB, Bluetooth connectivity, with optional features such as stability control, rear parking sensors, and 17-inch alloys.

The Peugeot 308 convertible (308 CC) was unveiled in 2009. The 308 CC has a metal folding roof that enables it to be used throughout the year. The roof quietly folds away to the boot in about 20 secs with a simple push of a button. It also comes with a feature called Airwave that blows warm air around the passenger and driver’s necks, keeping them warm during winter even with the roof down.

The 308 CC is well equipped even for the entry-level models. Standard features include chrome trim and alloy wheels as standard. Get in the cabin and you’ll be welcomed by a trio of air vents at the top of the center console, creating a pretty design.

The Peugeot 3008 is a compact crossover SUV produced by the French manufacturer Peugeot. The 3008 (three thousand and eight) was unveiled in 2008 and is currently in its second generation launched in 2017.

The facial looks of the 3008 feature a steep windscreen, detailed headlights, and an upright grille. At the rear, the tail-light design is astonishingly outstanding.

The interior is superb. Some of the features include Peugeot’s 8-inch touchscreen infotainment system,  Apple CarPlay, Android Auto, i-Cockpit with a 12.3-inch dash display, and a small steering wheel.
The seats front and rear have enough headroom and legroom for most adults without the interference of the transmission tunnel that distracts the rear legroom. At the rear, you are met with a 591-liter boot with a wide opening gate and a low load lip.

The 3008 comes fitted with a turbocharged 1.6-liter inline-4 petrol engine mated to a six-speed automatic transmission and has 176 hp. This combination can accelerate from 0-100 kph in 8 seconds. There’s also an option of the turbocharged 2.0-liter BlueHDi diesel, with 176 hp. This engine is mated to an eight-speed automatic transmission that accelerates from 0-100 kph in 9.8 seconds.

The Peugeot 207 is a car produced by the French automotive manufacturer Peugeot. The 208 was unveiled in 2012 to replace the 207 and is currently on its second generation from 2019.

The driver’s seat is height-adjustable enabling drivers to adjust the seat to a comfortable position. There is enough legroom and headroom for both rear and front-seat occupants. The 207 has a 285-liter boot which can be extended to 1152 liters with the rear seats folded down.

The 208 has a good safety rating, in 2012 it was awarded the maximum five-star in crash-test safety rating by Euro NCAP. Standard safety features include six airbags, electronic stability control, anti-lock brakes, a driver-set speed limiter, and a seatbelt reminder alarm.

The 207 comes fitted with a turbocharged 1.2-liter inline-3 petrol engine with 126 hp. This engine is mated to a six-speed manual or automatic transmission.
There are also several optional engines to choose from. They range from 1.0-liter, 1.2-liter, 1.4-liter,  and 1.6-liter. These engines are petrol and diesel variants.

The Peugeot 508 is a mid-size sedan (also available as a wagon) produced by the French automotive manufacturer Peugeot. The 508 was unveiled in 2010 and is currently on its second generation from 2018.

The 508 has an impressively looking exterior with great appeal. It’s stylish, curvaceous with a cohesive appearance. The bold front end echoes the Peugeot sporty looks, with neatly designed headlights and blade-type LED DRLs. The 508s stylishness continues at the rear, which features a black panel that runs across the tail incorporating the rear LED light clusters.

The 508 has nice and comfortable seats for all occupants, with the front seats electrically adjustable. There is enough legroom and headroom throughout as well. The 508 has a 487-liter boot that extends to 1537 liters with seats folded.

The standard engine on the 508 is a 1.6-liter inline-4 petrol engine with 120 hp and 118 lb-ft. This engine is mated to an eight-speed automatic transmission.

The Peugeot 2008 (two thousand and eight) is a subcompact crossover SUV produced by the French automotive company Peugeot. The Peugeot 2008 was unveiled in 2013 with its second-generation model released in 2019.

The 2008 has a very nice, neat, lavish, and well-designed interior. The seats offer enough support and are placed high to create that genuine SUV feel. The high driving position also gives the driver some good visibility of the road. The front seats have enough legroom and headroom for even the tallest of occupants, while the rear seats also offer ample legroom, but headroom is a bit limited due to the sloped roof. The 434-liter boot is enough and can be extended by folding the rear seats.

The 307s interior is special, its seats are set at low height and feature some racy features that give it a sporty feel. Unlike most convertibles whose rear seats are useless, the 307 comes with four usable seats, with enough legroom for all occupants.
Standard features on the 307 CC include a solid roof that opens in 25 seconds, electric windows, an air-conditioned glovebox, climate control,  a trip computer, cruise control, and a remotely controlled central locking system with an alarm.

The 307 CC comes with a choice of two 2.0-liter petrol and diesel engines that produce 175 hp and 134 hp respectively. These engines are mated to a five-speed manual or four-speed automatic transmission. These engines have an average fuel consumption of 12 km/l and 20 km/l respectively.

The 5008 MPVs exterior looks are eye-catching and elegant. The great exterior looks are carried over to the inside.
The MPV has comfortable seats and its driving position is good with great visibility thanks to the large windscreen and the higher driver’s seat. The seven-seat 5008 MPV has nice seats with each seat capable of moving back and forth, and legroom for the first and second-row seats is enough, but the third-row seat has limited legroom that is enough for kids.
The 5008 MPV has a 679-liter cargo space with all seats occupied which expands to a maximum of 2506 liters with all the seats folded.

The Peugeot RCZ is a sports coupe designed and marketed by Peugeot from 2009 to 2015.
The RCZ is a car that managed to strike a balance between practicality and style, handling and comfort,  and value for money versus premium feel.

The RCZ has four seats, but the rear seats can only fit kids. The cabin is well finished, with a pair of front sports seats, a leather-wrapped dash, iPod and USB connections, and a small sports steering with a flat top and bottom. The 384-liter boot is pretty decent for its size. The boot can be extended to 760-liters by folding the rear seats.

The RCZ comes fitted with a turbocharged 1.6-liter petrol engine that produces 197 hp. This engine is mated to a six-speed automatic or manual transmission.

The Peugeot 206 is a hatchback produced by the French automotive manufacturer Peugeot. The 206 was unveiled in 1998 to replace the Peugeot 205 and was in production till 2012.

The 206 CC (convertible) with a folding hardtop was released in 2001 as an addition to the already existing 206 lineups.

The 206 CC has an appealing design. With the roof up, the 206 CC has a bold coupe appeal and with the roof down the long rear deck assured the small Peugeot looked elegant. To open the roof you have to unclip two latches beneath the sun visors and then press the switch located next to the handbrake.

The low seating position of the 206 creates a sportier feel. The seats are comfortable and offer firm side supports, with a choice of cloth or leather trim. The rear seats are attractively styled but offer limited leg and headroom. The best option is to use them as additional cargo space.
With the roof down, most of the 410-liter boot space is eaten by the roof, with space remaining for a couple of bags. The 206 is ideal for light travel.

The 206 CC comes fitted with a 1.6-liter petrol engine with 87 hp. The engine is mated with a four-speed automatic or five-speed manual transmission.

Peugeot is an old car brand that built its reputation on making well-built cars with great ride comfort and handling. In recent years Peugeot has worked hard to rediscover itself and breathe a new lease of life to its model lineup. In the process, it found a new sense of style and launched several models some of which we have reviewed in this article.

The models we have reviewed are all good cars in their own right, whichever you opt to go for will be a great buy.
Please visit BE FORWARD and check out our extensive list of used Peugeots.