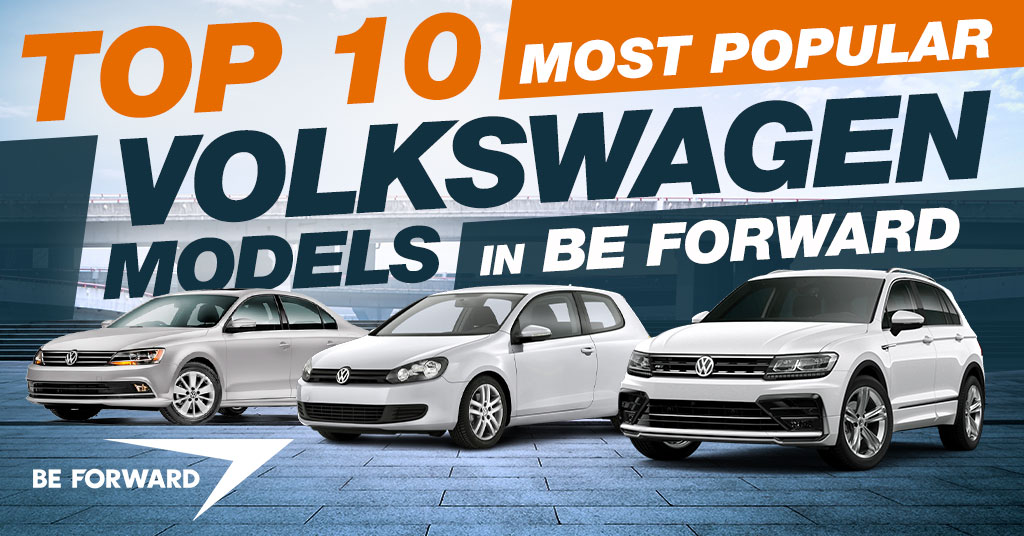 Volkswagen is a big brand; it’s one of the top three top-selling carmakers. Volkswagen offers comfort, reliability, and quality, with great attention to detail, such that even the most demanding drivers find satisfaction in driving VW models. VW’s are known for their smooth ride, powerful performance, and cutting-edge technology. Whether you go for small and midsize cars or small and midsize SUVs, you are guaranteed good fuel efficiency, durability, and ease of maintenance.

The Golf is one of the all-time biggest selling cars, and that is so due to its reputation as a solid, efficient, and reliable car.

The VW Golf is powered by a standard 1.4-liter, four-cylinder petrol engine, which generates 147 hp and 184 ft-lb. Power is transferred to the wheels via an eight-speed automatic transmission. The combined average fuel consumption is an impressive 17 km/l.

The VW Jetta is a compact four-door sedan manufactured by Volkswagen. The seventh-generation (A7) Jetta was released in 2018, it was an all-new sedan built on Volkswagen’s MQB platform.

The Jetta is comfortable, roomy, well-made, and worth every penny. Its seats are firm and well-bolstered, with enough room for five people, but two will be much comfortable at the rear instead of three. The Jetta’s 399-liter boot is enough for fitting several bags.

As standard, Jetta’s come with a 6.5-inch infotainment touchscreen with Apple CarPlay and Android Auto.

The base model Jetta comes with a turbocharged 1.4-liter four-cylinder petrol engine that produces 147 hp and is mated to either a six-speed manual or eight-speed automatic transmission. This engine has an average fuel consumption of 17 km/l

There is also an optional sports model, the Jetta GLI which comes with a turbocharged 2.0-liter four-cylinder petrol engine that produces 228 hp and is mated to either a manual or a 7-speed dual-clutch automatic transmission.

The VW Tiguan is a medium-size compact crossover SUV manufactured by Volkswagen since 2007. The second-generation Tiguan was released in 2016 looking more stylish, practical, capable, and offering better interior space due to the increase in wheelbase.

The base Tiguan comes fitted with a turbocharged 1.4-liter petrol engine that produces 147hp/184ft-lb and cylinder deactivation. Power is transferred to the wheels via a six-speed manual or six-speed direct shift gearbox (DSG) transmission, with front-wheel drive.

The Tiguan is a handsome car that features slim headlights, a chrome grille, and a shoulder line that runs from the front bumper to the tail-lights.
The Tiguan has an upscale interior with quality finishing. It’s a five-seater with supportive front seats and ample head and legroom. The rear seats can accommodate three adults at ease, although they are short on legroom. The rear seats are flexible, too, with sliding, reclining, and split-folding functionality. The Tiguan comes with a 520-liter boot that can accommodate several bags. There is also a seven-seat model which comes with two third-row seats that are suitable for kids, or medium-built adults but not on long journeys.

The VW Polo is a hatchback manufactured by Volkswagen. The Polo is practical, pleasant to drive, with lots of tech on board. Like other current VW’s, the latest Polo is also built on the MQB platform making the car longer, lighter, lower, with more boot space and legroom.

The Polo has a great driving position that offers a great amount of steering wheel and driver’s seat adjustment. The Polo’s body is surrounded by plenty of glass that creates an airy feeling and allows lots of light inside but also offers excellent visibility in all directions. The Polo’s interior space is superb, with enough elbow, head, and legroom for two adults in the front, and great room for another two at the rear seat, or even three if they’re midsize adults.

Under the hood, the Polo has a wide choice of engines, but the standard engine is the 1.0-liter three-cylinder petrol with the naturally aspirated versions producing 64 hp and 74 hp.
Other options include a 1.2-liter, 1.5-liter, 1.6-liter, and 1.8-liter engine.
These engines are paired to either a five-speed manual, six-speed manual, six-speed automatic or seven-speed DSG transmission.

The VW Touareg is a medium-size luxury SUV manufactured by Volkswagen since 2002.
The third-generation Touareg was released in 2018, it’s built on VW’s MLB platform with an ultra-modern cockpit and the latest VW body styling.

The face of the Touareg features a giant grille sweeping to the LED headlights, and a broad bonnet. The rear end is elegantly designed, with tail-lights that look sleek and perfectly proportioned.

The Touareg has several engines to offer, but the common ones are;

These engines transfer power to the wheels via an eight-speed automatic transmission.

The Touareg’s cabin is so attractive it features VW’s Innovision Cockpit, which merges 12-inch and 15-inch screens to replace the central infotainment screen and instrument panel with what appears like a single huge, gently curving display.

VW Golf Variant is a wagon built by Volkswagen.  The Variant just like its hatchback sibling is simple and restrained. It’s the Golf hatchback look-alike up to the trailing edges of its rear doors. From that point, its roof continues rearwards, with large windows added to the C-pillars and an additional 31 cm of bodywork added to accommodate the boot.

The Variant is spacious, with rear seats capable of accommodating two six-foot adults, with a decent amount of head and shoulder room.

The Variants dashboard is angled towards the driver and is easy to use, with easy to reach rotary controls and a user-friendly infotainment system.

The rear seat folds in the 60/40 split by just pulling one lever in the boot or on the side of the rear seats, and the seat drops flat creating a 1620-liter boot. The front passenger seat can also fold to allow long items to be loaded.

The VW Touran is a compact MPV built by Volkswagen. The Touran has generous space which makes it one of the very best mid-size MPVs. It offers a versatile and flexible seating arrangement, with a well-finished cabin, and a range of efficient engines.

The Touran is a 7-seater; its interior is modern, with an intuitive infotainment system. The seats are comfy and lavish, with good lumbar support and plenty of storage pockets.
Even tall passengers will find plenty of leg, head, and shoulder room. Each middle row seat is large enough to comfortably accommodate a full-sized adult or six-footer.
The third row doesn’t offer much space, but the mid-row seat can slide forward to create space with adequate legroom for the rear seat occupants.

The Touran comes fitted with several different engines, but the common ones are;

These engines transfer power to the wheels via either a five-speed manual, six-speed manual or seven-speed DSG transmission.

The VW Golf Touran is a seven-seat compact MPV built by Volkswagen. The Golf Touran is similar to the Golf hatchback, it shares the same classy and easy-to-use dashboard, same hardware that makes it a quiet and comfortable car with a five-star safety rating, but with large windows that give the driver great visibility.

The Golf Touran’s interior is clever; it comes with individual mid-row seats that make it possible to fit three child seats next to each other. These seats can also fold and slide independently of one another, with the two outer seats capable of tilting out of the way to make way into the rearmost seats fairly easily.
The two rearmost seats fold easily out of the boot floor, creating extra boot space. If more luggage room is needed, you can also fold the mid-row seats flat into the floor, and if that is not enough, you can also fold flat the front passenger seat as well.

The Touran like most VW’s comes with petrol and diesel engines. The standard engine is the turbocharged 1.4-liter four-cylinder petrol engine. These engines are paired with DSG automatic or manual gearbox.

The VW Scirocco is a two-door four-seat compact sports coupe built by Volkswagen. The Scirocco was built between 1974 and 1992 when production was halted until 2008 when production resumed and halted again in 2017.

The 70s’ Scirocco was based on the VW Golf, so is the 2008 release. The Scirocco features some distinct styling, good practicality, and a great chassis which made it a decent alternative hot hatch. The Scirocco was facelifted in 2014 to make it fresh, with crafty changes made to its exterior styling and the use of better materials for the interior finishing, which helped to raise the car quality. In this same year, there was a launch of the GTS and the R versions which are much faster.
The Scirocco was available in seven trims namely Scirocco, GT, GTS, GT Black Edition, R, R-Line, and R-Line Black Edition.

The VW Passat is a four-door five-seat sedan built by Volkswagen. The Passat is built with lavish cabin articles arranged in a simple and tasteful style. The rear seat has plenty of legroom.

Volkswagen is a significant powerhouse when it comes to car manufacturing. This has been proved time and time again, and that can be proved by the fact that on the all-time top ten best-selling cars, three models are Volkswagen: the Beetle, Golf, and Passat.

So if you are looking for a solid and good-looking vehicle that will provide you with a superb driving experience then go for a Volkswagen. We at BE FORWARD have plenty of VW’s listed for sale, please visit and choose your next car.