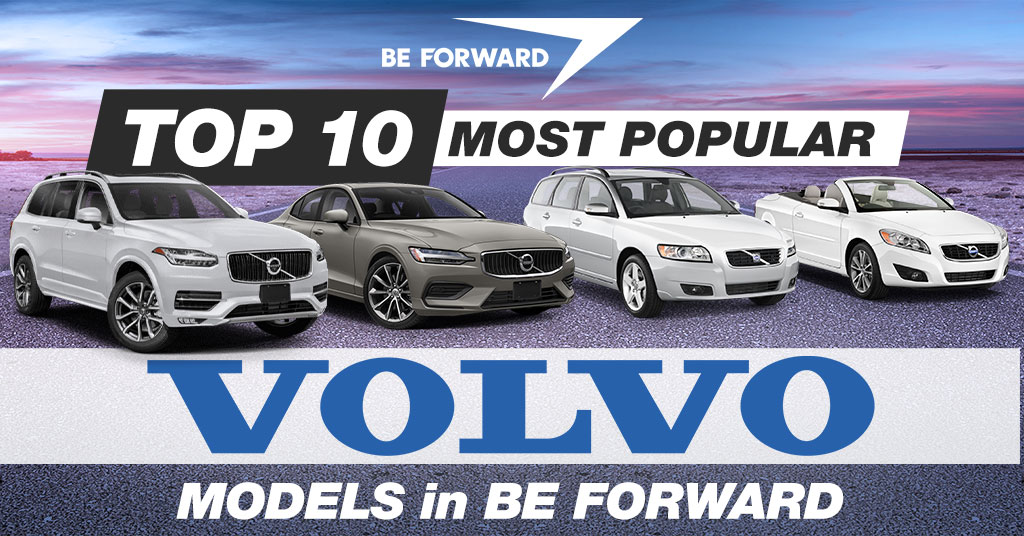 In this article, we are going to take a look at the 10 Most Popular Volvo Models in BE FORWARD.

The XC90 is available in T5, T6, and T8 trims that offer three seating configurations. The T5 is a five-seater, while the T6 and T8 trims are seven-seaters. The seats are comfortable and supportive, with the rear seats capable of sliding back and reclining. The seats have ample leg- and headroom, but the third row is not that spacious. Power-adjustable front seats are standard. Optional features include heated front and rear seats, massaging and cooling seats, front-seat power-adjustable cushion extensions, and leather upholstery.

The Volvo S60 is a compact executive luxury sedan manufactured by Volvo from 2000 and still in production. The S60 has spanned three generations, with the first released between the years 2000 and 2009, the second between 2010 and 2018, and the third from 2019 to the present.

The S60 shares the same engines and transmission as the XC60 above.

The Volvo V40 is a premium hatchback that was manufactured by Volvo from the year 2012 to 2019.

There are three models of the V40 referred to as T3, T4, and T5. These are fitted with three different petrol engines. The T4 comes fitted with a turbocharged 2.0-liter inline-4 petrol engine that produces 187hp/221lb-ft mated to a six-speed automatic transmission. This engine has an average consumption of 18 km/l.

The S80 is a five-seat car. Its front seats are comfortable and offer good support. The rear seats are lavish and pleasantly contoured. It comes with standard leather upholstery, heated and ventilated front seats, and heated rear seats as an option.
The S80’s cabin is quiet with top-quality materials. The interior of the S80 consists of a 7-inch infotainment screen, satellite radio, a navigation system, a USB port, Bluetooth, and a Wi-Fi hot spot. A Harman Kardon audio system is available as an option.

The 2016 S80 comes fitted with a turbocharged 2.0-liter inline-4 with 240 hp and 258 lb-ft. This engine is mated with 8-speed automatic transmission. The inline-6 engine and all-wheel-drive models were dropped for the 2016 release.

The V50’s cabin space is a bit limited for the rear seat occupants, kids will be fine, but taller adults will struggle for head and legroom. The front seats are excellent and its occupants have plenty of head and legroom and plenty of adjustment in the driving position that enables a driver of any sort to get comfortable.
The V50 comes equipped with climate control, an AM/FM radio, a CD player, sat-nav, power outlets, climate control, USB port, and reversing sensors as standard.

Like other Volvo’s, the V50 has a very good safety rating. Standard safety features found in the V50 include electronic stability control, daytime running lights, and six airbags, while blind-spot monitoring is optional.

The Volvo V60 is a compact luxury wagon manufactured by the Swedish company Volvo. The V60 was first unveiled in 2010, and received a facelift in 2014, and is currently in its second generation since 2018.

The V60 comes fitted with either one of two (T5 and T6) powertrains. The Dynamic and Cross Country trims are fitted with the T5, while the R-Design and Polestar trim come with the T6.
T5 models are fitted with a turbocharged 2.0-liter inline-4 engine that produces 240 hp. The T6 on the R-Design is a turbo- and supercharged 2.0-liter inline-4 engine that produces 302 hp, and the T6 on the Polestar model produces 362 hp. These engines are mated to an eight-speed automatic transmission.

The Volvo C30 is a premium sports coupe manufactured by the Swedish company Volvo. The C30 was in production from the year 2006 to the year 2013.

The C30 is a two-door four-seat coupe. The front and rear seats are well contoured and offer great support, but the rear seats are short of legroom. With a two-door layout accessing the backseat is cumbersome.
The C30’s large windows offer great all-around exterior visibility. The C30 has a 360-liter boot with its rear seats in place which expands to 570-liters with the seats folded.

The IIHS voted the C30 as a Top Safety Pick in 2013 and gave it a Good (highest score) rating in all four aspects tested. Safety features found on the C30 include rear parking sensors, blind-spot monitoring, and adaptive bi-xenon headlights that swivel to illuminate corners.

The C30 comes fitted with a turbocharged straight-five engine that produces 227 hp. The C30 Polestar’s engine is software tuned, which raises its output to 250 hp. This engine transfers power to the front wheel via a six-speed manual transmission with an optional five-speed automatic transmission also available. This engine has an average fuel of 10.8 km/l.

Volvo F12 is a truck that falls in the F-Series trucks manufactured by the Swedish company Volvo trucks. The F12 was first released in 1977 and was in production until 1994 when it was replaced by the FH-Series trucks.

After its introduction in 1977, the F12 truck immediately became a big success that Volvo had ever encountered (more than 200,000 units were produced in total by the mid-1990s) so had to make sure that they defended their lead obtained with the F10/F12 by continuously improving and modernizing.
In 1983 the exterior of the F12 was upgraded, it came with a larger windscreen its roof heightened. With these upgrades, the cab shape looked more modern compared with the first, which had a flat roof and a boxy cab. But the cab was not the major innovation in the F12 of 1983. The decrease in weight of the chassis components, combined with more fuel-efficient tanks contributed to a better transport economy.

Other improvements were the introduction of 10 and 12-liter engines, with improved service life and reliability.

The Volvo C70 is a convertible luxury midsize car manufactured by Swedish company Volvo from 1996 to 2013. The first generation was in production between 1996 and 2005, and the second generation between 2006 and 2013.

The C70 convertible has a good-looking and well-built interior that can accommodate four occupants. Its front seats are supportive and comfortable, while its spacious back seats are the roomiest in the class. The C70 has a 360-liter boot with the roof in place and this decreases to 170 liters with the roof open.

Standard features of the C70 include Bluetooth, a USB port, and satellite radio as standard. Optional features include a premium Dolby audio system, navigation, heated front seats, and blind-spot monitoring.

The C70 comes fitted with a turbocharged 2.5-liter five-cylinder petrol engine that produces 227 hp. This engine is mated to a five-speed auto-manual transmission. This engine has an average fuel consumption of 9.8 km/l.

Volvo cars are known for their safety and durability and from this brief review, we can cement that notion, as most of the cars that we reviewed here have very good safety, durability, and reliability rating.
We hope this review will help to give you proper guidance in arriving to make an informed decision.
Visit BE FORWARD and choose from our extensive list of Volvo’s your next Volvo.