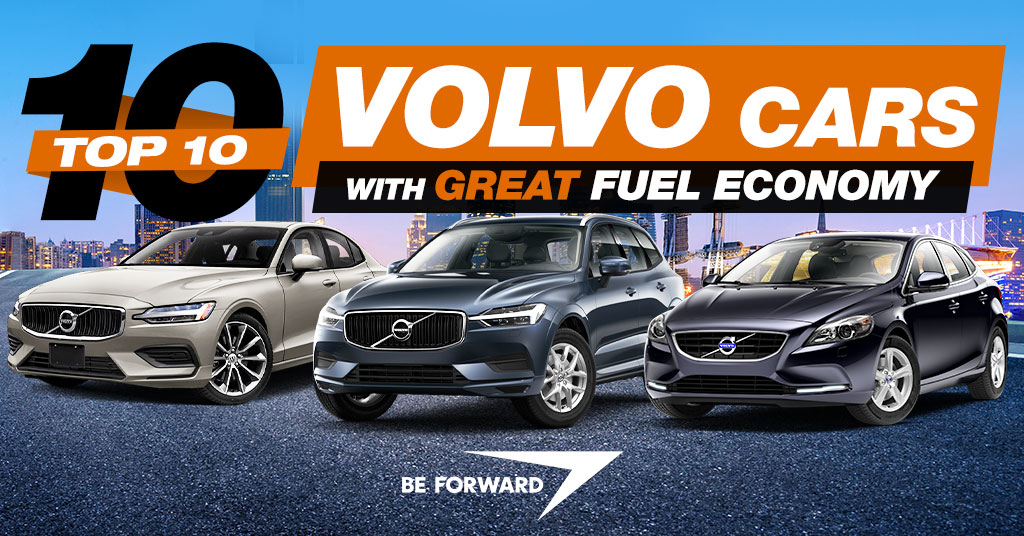 The Volvo cars are known for their safety, reliability, and durability. Volvo Cars put their first priority in safety that’s why their entire model’s lineup is rated high on safety and crash tests. coupe’s, saloons, estates, or SUVs come fitted with high-end material and technology and are among the safest cars in the world. This results in the company having a tendency toward engines built for long trips instead of excitement.

In this article, we’ve listed the top 10 Volvo cars with great fuel economy. If you need a sedan, wagon, or SUV for family use, a hybrid or electric vehicle for increased fuel efficiency you’ll find your road trip-ready car here.

The Volvo V40 is a small family car and premium wagon that was manufactured by Volvo from the year 2012 to 2019.

The Volvo S60 is one of the compact executive luxury sedan cars in the Volvo lineup. The S60 has been in production for 3 generations, with the first released between the years 2000-2009, the second between 2010-2018, and the third from 2019 to the present.

The base T5 Dynamic is equipped with features such as Volvo’s Sensus infotainment system, a USB port, a 7-inch display, Bluetooth, and an 8-speaker sound system. Other standard features include a moonroof, dual-zone automatic climate control, and leather seats. Higher trims come with extra features such as power sunshades for the 3 rear windows, a Harman Kardon sound system, navigation, heated front, and rear seats, sport seats, a DVD player, proximity key, push-button start, and walnut inlays.

The V60 comes fitted with either one of two (T5 and T6) engines. The Dynamic and Cross Country grades are fitted with the T5, while the Polestar and R-Design trim come with the T6.

The Momentum grade is fitted with lots of standard safety and technological features with the higher grades mostly having extra luxury touches.

This is a mid-size luxury wagon manufactured and marketed by Volvo since 2016. In March 2016 the V90 wagon was revealed at the Geneva Motor Show. The V90 is offered with numerous grade levels. The V90 Cross Country is a raised height and previewed before the 2016 Paris motor show, The V90 AWD version is designed for use on rough terrain, for light off-road usage, and unsealed roads.

Under the bonnet, the Volvo V90 is only available with 4 cylinder 2.0L petrol and diesel engines from the VEA family (DRIVe).  The T8 is a plug-in hybrid model and more powerful petrol engines that are compound charged. The D5 model diesel engine features Volvo’s new PowerPulse technology that is designed to eliminate turbo lag as well as an i-Art injection system.

The Volvo XC90 is available in T5, T6, and T8 grades that have 3 seating configurations. The T5 is a 5-seater, while the T6 and T8 grades are 7-seaters. The seats are supportive and comfortable, with the back seats capable of reclining and sliding back. The seats have plenty of head and legroom, but the 3rd row is not that large. Standard features include power-adjustable front seats. Optional features include massaging and cooling seats, heated front and rear seats, leather upholstery, and front-seat power-adjustable cushion extensions.

The Volvo V70 is an executive car manufactured by Volvo Cars from 1996 to 2016 across 3 generations. The nameplate V70 include the letter V, standing for versatility, and 70, denoting relative platform size such as a V70 is larger than a V40 but smaller than a V90.

In November 1996 the 1st generation from 1996 to 2000 debuted. It used the P80 platform and was available with all-wheel (AWD) and front-drive a few years later marketed as the V70 AWD. In September 1997 Volvo introduced a crossover version called the V70 XC or V70 Cross Country.

In spring 2000 the second generation (2000–2007) debuted and used the P2 platform and, as with its forerunner, was also offered as an all-wheel-drive model marketed as a crossover version initially called V70 XC and the V70 AWD. The XC70 was renamed for the 2003 model crossover.

The V70 comes fitted with several safety features such as a driver airbag which was standard on all V70 models, Seatbelt pretensioners with load limiters, for both front passenger and driver, Side Impact Protection System (SIPS) were always part of the standard equipment.

The Volvo S90 is a premium sedan manufactured by Swedish automaker Volvo Cars from 2016 and the Volvo V90 is its estate model. The model year of 2017 was available as a short and long-wheelbase sedan as well as an estate model.

While not a direct predecessor to the 2nd generation S80, the S90 swaps it as the flagship sedan in Volvo’s lineup. Numerous grade levels are available, ranging from Momentum to Inscription.

The S90’s interior is by far its most exciting feature. A mixture of open-pore wood, brushed metal, finely grained plastics, genuine leather, and high-end materials comes together in an undeniably modern and cohesive space. The S90 sedan will meet the needs of most owners and drivers, and models with the folding back seat back provide a vast cargo area.

The S90 comes fitted with a long list of driver-assistance features and Volvo provides most of it as standard equipment. The key safety features include standard automated emergency braking with forward-collision warning, standard lane-keeping assist, standard adaptive cruise control, and Google built-in.

According to the EPA, models equipped with the B6 powertrain have fuel economy ratings of 9.77 Km/L in the city and 13.1 Km/L on the highway while the hybrid Recharge models earn a rating as high as 26.7 Km/L combined. The plug-in hybrid offers 13.6 Km/L.

The Volvo XC70 offers a deluxe cabin lined with fine materials, soft leather, genuine wood trim, and high-end materials. The Volvo XC70 powered by an intercooled turbo regular unleaded I-5 2.5L with an MPI generates a maximum of 250 hp at 5400 rpm with a maximum torque of 266 Nm at 1800 rpm.

The S80 is a 5-seat car. Its front seats offer good support and are comfortable. The back seats are pleasantly contoured and lavish. It comes with standard heated and ventilated front seats, heated rear seats as an option, and leather upholstery.

The S80’s interior is dressed with top-quality materials. The interior of the S80 consists of a satellite radio, a 7-inch infotainment screen, a navigation system, Bluetooth, a Wi-Fi hot spot, a USB port, and a Harman Kardon audio system is available as an option.

Volvo cars are one of the top cars known for their durability, safety, and reliability. In this review, we can prove that notion, as most of the cars that we reviewed here have very good fuel economy, durability, reliability rating, and good safety.

We hope this piece of article will help to give you proper guidance in selecting one of the Volvo models reviewed above to make a good decision. We have all Volvo models in our store and visit BE FORWARD.