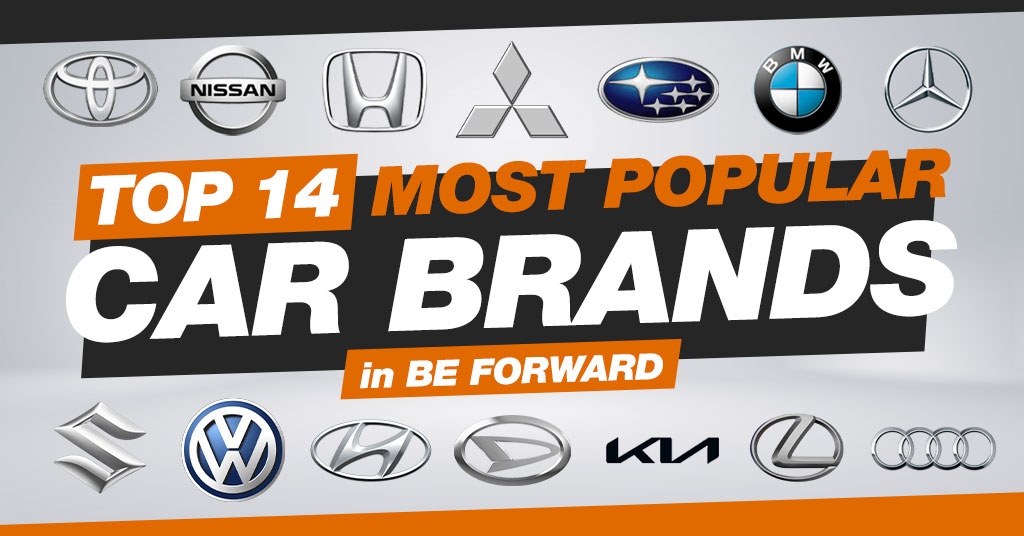 BE FORWARD is a Japanese company whose core business is selling used cars. The company began its operations in 2004 and is now a global leader in used car exports. As part of our operations and in making sure we keep improving our services we do collect data on car sales, and from that collection, we want to share with you our customers, future customers, and readers details on the car brands that are most popular from our perspective, and briefly highlight what makes these cars popular.

Toyota is a Japanese car manufacturer that began car manufacturing in 1936, and over the years kept perfecting their trade which eventually saw them growing from just a small company into a multinational and world leader in car manufacturing. Toyota has held the number one spot for several years apart from 2019 when it was toppled by Volkswagen.

But why is Toyota popular?

Toyota’s are known for their reliability, dependability, and having a good resale value. In different parts of the planet, Toyota vehicles are highly ranked when it comes to their resale value.
Toyota vehicles are also famous for their safety features, which is another critical factor to consider when purchasing a vehicle.
Toyota’s are known for being trouble-free and affordable cars.

Nissan is a Japanese multinational company founded in 1933 and specializes in car manufacturing. Nissan like several major Japanese car manufacturers was able to capture the international markets not by chance, but by the reputation of the cars they produce.

Japanese cars have a reputation of attracting a good resale value, and so is Nissan. Some Nissan models have a very good resale value compared to others, with models such as the X-trail, Patrol, and several others being good ambassadors in this category.

Honda is a Japanese multinational famous for manufacturing cars and motorcycles from 1959. Honda is Japan’s second-largest car manufacturer after Toyota.

Honda is the world’s largest engine manufacturer, engines that are built with high-quality materials and purpose-built components mated to high-quality transmissions with both of them guaranteeing long-term reliability and use. Some of their engines have a 3-year warranty. Honda’s are safe cars as well with all of their models evaluated by NHTSA scoring 5-star in overall car safety.

Mitsubishi Motors is a Japanese multinational that manufactures cars in different parts of the world. Mitsubishi is one of Japan’s largest vehicle manufacturers.

Subaru is a car manufacturing division of Subaru Corporation that started manufacturing cars in 1953. Subaru’s are known for their signature boxer engines.

Subaru’s are dependable cars that are built to last. They come with a proven record for safety, a proven symmetrical all-wheel-drive system, and tested boxer engines.
Subaru owners are some of the most loyal, they find their cars immensely satisfying to drive, they love the interiors, high reliability, and they say that no other carmaker offers much better safety systems.

The biggest selling Subaru cars at BE FORWARD include Forester, Impreza, Outback, WRX, Exiga, Sambar, Legacy, Levorg, and several others.

BMW is a German multinational company that among other things specializes in car manufacturing since 1928. BMW is a company that has specialized in producing premium luxury brands across its model lineup.

BMWs are known for being “Ultimate driving Machines” with great power and performance, but also a good combination of sportiness and luxury. In other circles/societies, BMWs are bought purely as status symbols.

The biggest selling BMW cars at BE FORWARD include M-class, 7-series, 3-series, 1-series, 4-series, the X5, and several others.

Mercedes Benz is a German multinational carmaker that specializes in manufacturing premium luxury cars with its first model released in 1926. Since then Mercedes has gone on to capitalize on the luxury car market and make it its own.

The Mercedes-Benz is a car known to deliver when it comes to on-demand power, ultimate performance, excellence in ride quality, top-of-the-class handling, ultimate comfort, great fuel economy, top safety features, and state-of-the-art entertainment. In simple terms, a Mercedes-Benz is the closest you can get to ultimate luxury and perfection in cars.

The biggest selling Mercedes-Benz cars at BE FORWARD include C-Class, E-Class, M-Class, A-Class, B-Class, G-Class, GL, and several others.

Suzuki is best known for its small, unorthodox cars, with small but reliable and economical engines.  This tradition goes way back to when Michio Suzuki began building his first small car in 1937.
Suzuki’s cost less to buy and run than most of its rivals. Suzuki is also known for building small off-road 4×4 cars with the Suzuki Jimny introduced in 1970 performing very well in this territory.

The biggest selling Suzuki cars at BE FORWARD include Carry, Jimny, Alto, SX4, Swift, Every, Escudo, Wagon R, Grand Vitara, and several others.

Volkswagen is a German automotive giant that manufactures cars in its different plants around the world. The first Volkswagen car was the flagship Beetle which was released in 1937.
Volkswagen is the second largest car manufacture by volume of car sales, a position they frequently swap with Toyota at pole position.

Volkswagen cars are known for their dependability. However, VW is also known for its reputation of making good cars that perform well when it comes to design, performance, and overall quality.

The biggest selling Volkswagen cars at BE FORWARD include Passat, Golf, Jetta, Touareg, Touran, Tiguan, the Bettle, Bora, Amarok, Polo, and several others.

Hyundai is a South Korean car manufacturing multinational based in Seoul. Hyundai is one of the pioneering companies in the Korean automotive industry. Hyundai began car production in 1968, with their first Korean car released in 1975.

Hyundai’s are known for being “cheap” cars, but at the same time offering dependable cars with most of the features found in models of established car brands at an affordable price.

The biggest selling Hyundai cars at BE FORWARD include Tucson, Accent, Terracan, Mighty, Elantra, Tuscani, Sonata, and several others.

Daihatsu is a company that has specialized in making mini, compact, and utility cars that are reliable, and dependable. Most of these cars were fitted with a 660cc engine. The construction and technical quality of Daihatsu cars and engines are well appreciated.

Kia is a South Korean multinational automotive manufacturer based in the capital Seoul. Kia was founded in 1944 but wasn’t until 1962 that they manufactured their first car.

The South Korean motor industry is not as old as in other rival countries, and this made earlier Kia’s to be known for their unreliability. Now many years have passed and Kia has perfected its trade, and now the brand is known for its high-quality material, exceptional reliability, and affordable prices.

The biggest selling Kia cars at BE FORWARD include Bongo, Cerato, K3, Sportage, K5, Morning, K7, and several others.

Lexus is a premium luxury division of the Japanese automotive giant Toyota that was established in 1989.

Lexus being a Toyota luxury brand, its models are famous for their reliability, dependability, and durability. But to add that icing on the Toyota cake Lexus models are built to be luxurious with outstanding quality, a comfortable and opulent interior, an impressive ride, and good resale value.

The biggest selling Lexus cars at BE FORWARD include LX, ES, IS, GS, NX, RX, LS, SC, RC, IS F, and several others.

Audi has a huge following around the world, and they deserve to. Audi produces some of the highest quality vehicles that come fitted with plenty of ground-breaking and innovative technology. Audi’s are well-crafted with beautiful and unique features adorning the interiors as well as the exteriors, with controls expertly placed within proximity to the driver and passenger.

We have taken a brief look at the Top 14 Most Popular Car Brands in BE FORWARD by looking at the brand history, what makes these brands popular, and the models that these brands have to offer which are all available and listed on our BE FORWARD website.

These brands are not popular for no reason, they have earned that popularity by producing nice cars, and we at BE FORWARD with our 17 years experience of selling used cars have no doubt about that.

With a stock of over 130,000 cars, we at BE FORWARD guarantee you that you won’t miss any of these and any other car brands and models on our site, and if it happens it’s out of stock, you can always contact us for inquiry.