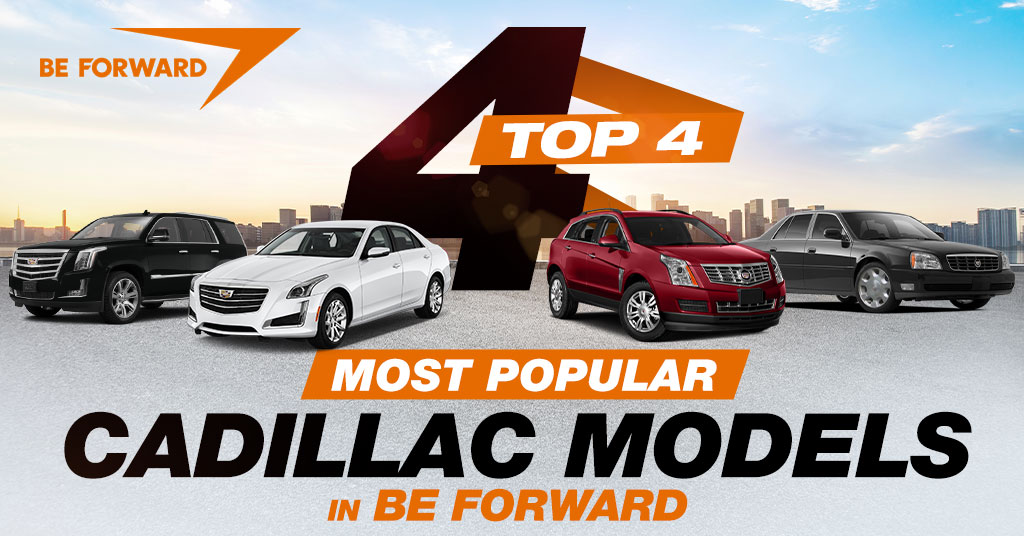 Cadillac Motors is an American automobile manufacturer that specializes in the production of luxury cars.
Cadillac was founded in 1902 in Detroit, Michigan, with an experience of 100+ years in car manufacturing. Its current headquarters are in Warren, Michigan.

In this article, we are briefly going to review 4 of the most popular Cadillac models in BE FORWARD in order to understand what makes them popular. Please read on

The interior of the 4th generation Escalade’s cabin is nice and neat, with plenty of premium material finishing. It’s an eight-seater, with the first two rows offering lots of space. The third-row seats of the standard model are not that spacious, but the long-wheelbase models have a spacious third row. The upholstery is in leather and suede with some wood trim.
The dash is fitted with an 8-inch touchscreen display at the center which can be activated by capacitive touch, voice, and swipe gestures, while on the driver side there is a 12.3-inch digital instrument cluster display that can be configured in four different themes.

The Cadillac CTS is a sports luxury sedan that was produced and marketed by Cadillac (General Motors) from 2003 to 2019. The CTS spanned across three generations before it ceased production in 2019.

The CTS exterior is sleek and seductive, it’s defined by the crisply straight-edged sheet metal with front LED lights that run down to the bottom, while the rear end is adorned by taller headlights and twin exhaust pipes that protrude elegantly beneath the bumper.

The 2018 CTS is a two-row five-seat car. The 12-way power-adjustable front seats have enough head-, leg-, and knee room to the comfortability of passengers. The rear seats are short of space, and many adult occupants will struggle for knee-, shoulder-, and legroom. As standard, the CTS comes with synthetic leather upholstery and a leather-wrapped steering wheel with optional automatic temperature control.

The 2018 base CTS comes with a turbocharged 2.0-liter four-cylinder petrol engine with 268 hp. Optional engines include either a 3.6-liter V6 with 335 hp or a twin-turbocharged 3.6-liter V6 with 420 hp and lastly a supercharged 6.2-liter V8 with 640 hp. These engines are mated to an eight-speed automatic transmission with an AWD or 2WD drivetrain.

The SRX is a fresh and tasteful crossover SUV built with the traditional Cadillac attributes of sculpted curves and stark angles. The front facial of the SRX features a brightly chromed grille with vertically stacked headlights on its sides. On the sides, there’s a deep line incised from the nose to the taillights. At the rear, there are neatly designed tall LED taillights and a rear spoiler for better aerodynamics.

The 2016 SRX cabin is attractive and made of quality materials throughout. The front seats are soft, supportive, and comfortable, with enough headroom and legroom. The rear seats are lavish as well, but headroom is limited, especially for tall occupants, and it gets worse in models with sunroofs. Leatherette upholstery is standard with leather upholstery, heated, and ventilated front seats, and heated rear seats as options.

The 2016 SRX is offered with a 3.6-liter V6 engine with 308 hp, mated with a six-speed automatic transmission. The SRX can accelerate from 0-100 kph happens in 7 seconds.

The Cadillac DeVille is a full-size sedan manufactured and marketed by the American company Cadillac (General Motors) from 1958 to 2006. The DeVille spanned eight generations throughout its lifetime.

The 2006 DeVille exterior features include Cadillac’s revised signature grille and some knife-edge styling seen on current Cadillac models. The DeVille is still built on the standard G-platform, which was launched on the 2000 DeVille.

The DeVille comes with a 4.6-liter Northstar V8 petrol engine with 275 hp and 300 lb-ft of torque. The engine was mated with a four-speed automatic transmission.

As from our previous introduction we have learnt that Cadillac is General Motors’ flagship luxury brand. Cadillac produces a range of luxury cars, from Coupes, sedans, crossover SUVs, to full-size SUVs. In this article we have reviewed four Cadillac cars that fall in different categories and can generally conclude that each one of them is indeed gem made up of premium features that qualify them as true luxury cars. Apart from luxury, these cars also have very powerful engines under the hood that can take you places without hesitating and from this conclusion, we can recommend these models as great buys if you are in the market for one.

Please visit BE FORWARD and checkout these models and several other Cadillac models from our 550+ list of Cadillacs.