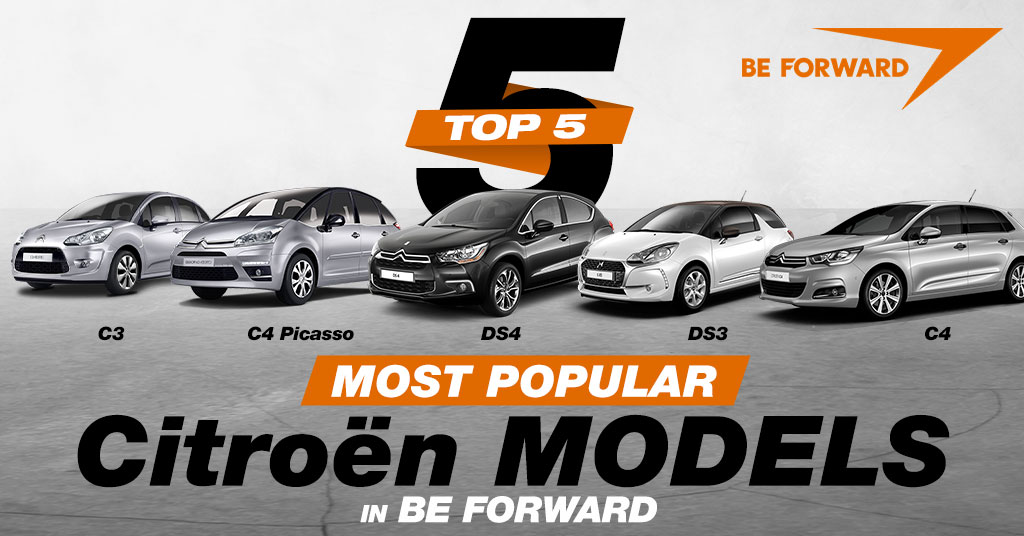 Since the introduction of the Citroen type A in 1919 Citroen have gone on and produced many wonderful cars, and fast forward to 2021 they are still producing nice cars. Today, in this article we will briefly take a look at 5 of the most popular Citroen models in BE FORWARD. Please follow through.

The Citroën C3 is a subcompact hatchback manufactured by Citroën from 2002. The C3 is currently on its third generation from 2017, and our review will mostly be based on it.

The C3 is a modern, stylish, and cute car that features Citroen’s funky-looking design traits. The front grille is embellished in chrome with the stylized Citroen symbol of double-helical gears at the center and LED DRL’s on each end. On the sides, there are air bump rubbing strips, three-quarter panels, and 16-inch alloy wheels.

The C3’s cabin is welcoming with an interior trim that features a dash with faux-wood strips that match seat upholstery stripes. The dash is simple, it has a seven-inch touchscreen at the center that is used for controlling various functions, including heating, infotainment, and air-con. The C3 is a five-seat car with soft and comfortable seats. The front seats have enough legroom, while the rear legroom depends on the front seat occupants. For headroom, there’s plenty and its five-door body gives good access. The C3 has a 300-liter boot.

The C3 comes fitted with a 1.2-liter inline-3 petrol engine with the naturally aspirated PureTech83 producing 81 hp and 87 lb-ft of torque, while the turbocharged PureTech110 produces 107 hp and 151 lb-ft of torque. There is also an option for the BlueHDi diesel which produces either 75 hp or 100 hp. The petrol engine has an average consumption of 25.5 km/l and the diesel has an average consumption of 34 km/l. These engines are mated to a five or six-speed manual or six-speed automatic transmission.

The Citroën C4 Picasso is a five-seat compact multi-purpose vehicle (MPV) produced by French automotive manufacturer Citroën. The C4 Picasso was unveiled in 2006 and is currently on its second generation from 2013.

The C4 Picasso’s exterior design is appealing and boldly styled. Standard exterior features include a panoramic glass roof, alloy wheels, and LED daytime running lights. The facial of the C4 Picasso features a set of chevron grille, LED DRL’s, small headlamps, and a large and wide lower air intake that altogether give the Picasso’s nose a futuristic guise.

Step inside the C4 Picasso and you are met with a dash covered in soft-touch plastic and a centrally mounted instrument panel. The C4 Picasso comes with a standard hi-tech twin-screen set-up. The 7-inch lower touchscreen has overall control of the entertainment system, climate control, and navigation, while the 12-inch top unit displays car info and driving data.

The C4 Picasso comes with a standard turbocharged 1.2-liter inline-3 PureTech petrol that produces either 110hp or 130hp. An optional 1.6-liter BlueHDi diesel is also available, it produces either 100hp or 120hp. The diesel engine has an average consumption of 31 km/l.

The Citroën DS4 is a compact hatchback manufactured by the French automotive company Citroën. The first generation DS4 was produced from 2010 to 2015. From 2015 the DS became a luxury brand for Citroën.

The DS4 is built with a taller roofline and its body is curvy, which gives it a coupe-like depiction. Key design features include the two chevron grille bars, chrome edges around the side sills and windows, and LED rear lights.

The DS4 is a car aimed at the premium market, so with that in mind, the cabin is fitted plenty of piano black and soft-touch plastics. Soundproofing is great as well, which led to a relaxing interior ambiance.
The DS4 has a stretched windscreen that extends above the front seat occupants head, with retractable blinds to cover when the sun is strong.

The DS3 is an unapologetically stylish car with striking details. Post-2015 DS’s feature a vertical grille surrounded by chrome with a wing motif that stretches to the headlights. The headlights are a combination of LED/Xenon headlights, LED DRL’s and scrolling directional indicators. Other features include the trademark floating roof, central pillars, and shark-fin-shaped bodywork.

The dash is well-finished, it features polished metal highlights, glossy black plastics. The DS3 is a five-seat car, its front feels more spacious due to the large seats and deep windscreen. Rear seats are short of legroom so they are best suited for accomodating kids, who are also better suited for the rather slim access into the rear.

Standard features in the DS3 include Air-con, Active City Brake, and Bluetooth connectivity. Other options include Apple CarPlay, Android Auto, MirrorLink, a reversing camera, and front and rear parking sensors.

The Citroën C4 Cactus is a subcompact crossover SUV, manufactured by French company Citroën. The C4 Cactus was produced between 2014 and 2020, whereby the first generation was produced from 2014 to 2017, and the second from 2017 to 2020. In 2020 a new (third generation) C4 compact SUV was unveiled.

The C4 Cactus is a quirky and cute small SUV designed that stands out from the crowd. Its unconventional face features LED running lights, LED headlights, and fog lights, but there is no orthodox bumper nor grille, only an air intake, and the Citroen double chevron badge above it, while on the sides you find the unique AirBumps.

The C4 Cactus has a nice interior finished with high-quality materials. The cabin is airy, the seats are comfortable and supportive, capable of accommodating five passengers, but four will be better. There’s plenty of room in the back, with enough leg, shoulder, and headroom as well. Its 358-liter boot is enough to accommodate necessary family luggage too.

The base C4 Cactus comes fitted with a 1.2-liter inline-3 petrol engine with 80 hp, while there are two turbocharged versions of this engine with 108 hp or 127 hp. There is also a  1.6-liter diesel option with 99hp.

Citroen is a brand that built its reputation as innovative, distinctive, and different. This is what Andre Citroen envisioned straight from the Chevron striking, quirky, old school, and uniquely French. The recent Citroen releases are living up to this mantle and indeed are true predecessors.

The cars that we have reviewed here are all so impressively efficient and practical. They all add these sensible Citroen virtues to a package of peculiar cars creating a refreshing alternative to various categories of the automotive world. These offerings from Citroen are stylish, sensible, and simple.

Please visit BE FORWARD and check out our list of about 200 used Citroens.