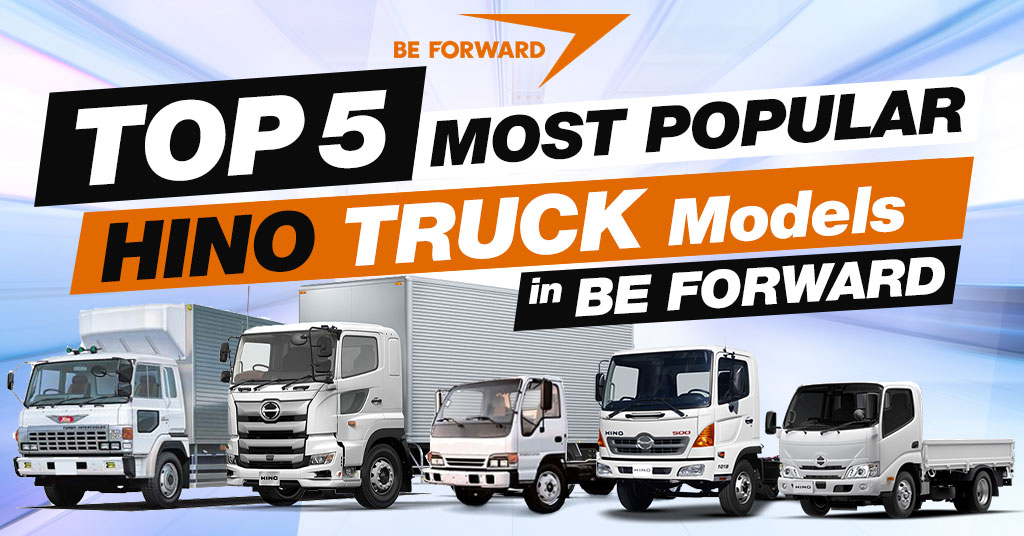 The Hino is the most known brand of Hino Motors, Ltd., which is known for manufacturing and marketing a wide range of buses, commercial vehicles, and trucks including medium to heavy-duty trucks. The Hino trucks are most popular for their reliability, dependability, and rigidity which can withstand rough terrains or city roads. Added its outstanding engine options with notable technologies to maximize the productivity and safety of the occupants. Now, let us talk about the Top 5 Most Popular Hino Truck Models in BE FORWARD.

The Hino Ranger 2, which was also marketed as Daihatsu Delta and a rebadge of Toyota Dyna, is a medium to heavy-duty commercial truck which was introduced in 1978. It was the 2-tonne version of the Ranger and follows a 3-tonne version, called the Ranger 3. In 1984, the second generation Ranger 2/3 was released and equipped with a four-wheel-drive system, power steering, power windows, anti-lock braking system, and spare tire. The Hino Ranger 2 comes equipped with a 4,100 cc 15B with manual transmission.

The Hino Ranger, also known as the 500 Series internationally, is a medium or heavy-duty commercial truck that was first produced in 1964 and is now in its sixth generation. It is available in a 2-door standard cab and 4-door crew cab with a short wheelbase KM320 as well as the long-wheelbase KM340 version. The sixth-generation Ranger has gone through some changes with an upside-down trapezoidal shape front grille, a new headlamp, revised chassis, and semi-floating suspension. Also, include a 7-inch Multi-Information Display with hands-free function, Bluetooth with an On-board failure diagnostic device (J-OBDII), and a 4-spoke steering wheel. The Hino Ranger is equipped with J05D TG with 129 kW, J08E UA with 152 kW, J08E TE with 168 kW, J08E TB – 190 kW, and an all-new 5.1L A05C engine. Transmissions include a 6-speed or 7-speed manual, 6-speed Allison automatic, and 6-speed or 7-speed Pro Shift semi-automatic.

The Hino trucks are one of the top-selling commercial trucks known around the world. They offer high-rated reliability, dependability, high quality, outstanding fuel economy, and the best technologies for safety reasons and productivity. You can check the BE FORWARD store for more available and affordable Hino trucks that will definitely suit your budget.