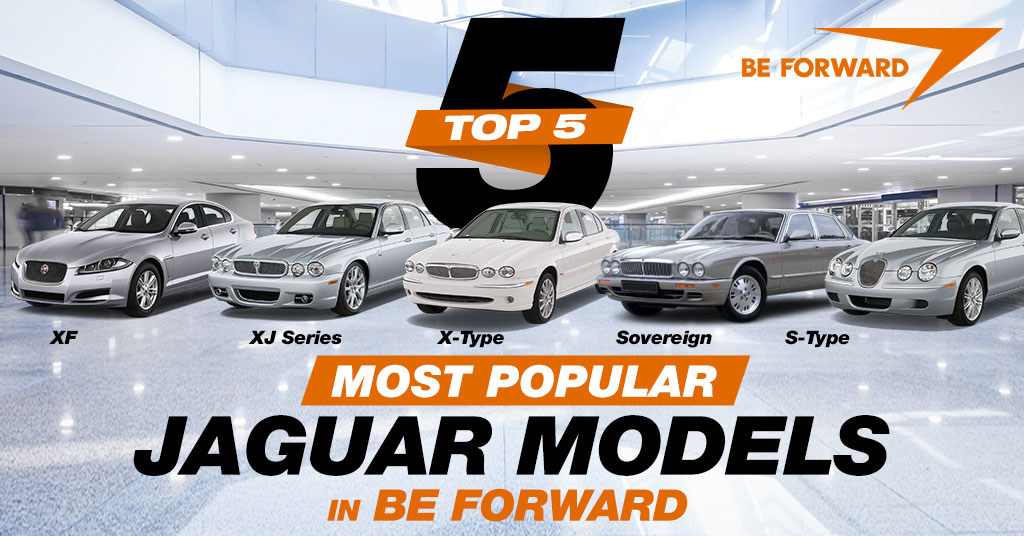 Jaguar is a luxury vehicle brand produced and marketed by the British multinational car manufacturer Jaguar Land Rover (Jaguar prior to 2013) from 1935. What catapulted Jaguar in its early days is its success in motorsports from 1948 to 1975 when its models XK120, XK 140, XK150, and the E-type which was a signal of engineering prowess then.

In this article, we will take a brief look at 5 of the most popular Jaguar models in BE FORWARD in trying to see what makes them popular and inform you the reader. Please read on

The 2018 XF is a five-seat car with a spacious and comfortable cabin. Its front and rear seats offer a great amount of legroom for adults, even tall occupants will find the seats comfy and supportive.

The 2018 XF sedan is offered in six trims starting with the base, followed by the Premium, Prestige, R-Sport, Portfolio, and S.
Standard features of the base model include the InControl Touch infotainment system, an 8-inch touch screen, synthetic leather upholstery, and an 11-speaker Meridian sound system. But if you need that balance of price and luxury, then the Prestige trim will be the best option. It features soft grain leather upholstery, heated front seats, ambient lighting, and a heated and soft grain leather-wrapped steering wheel.

The XF is available in five different engine choices depending on trim as listed below.

Power is transferred to the rear wheels via an eight-speed automatic transmission.

The Jaguar XJ is a full-size luxury sedan manufactured by Jaguar cars (Jaguar Land Rover) from 1968 to 2019.

The 2018 XJ is a five-seat car with a nice, beautiful, simple, and timeless cabin with elegant leather touches. The front and rear seats are comfortable and supportive with plenty of headroom and legroom. The long-wheelbase models have an extra 4.8 inches of rear legroom to offer.

The XJ comes fitted with either one of three supercharged engines.

These engines transfer power to the rear wheels via an eight-speed automatic transmission.

The Jaguar X-Type is a compact executive sedan manufactured and marketed by Jaguar Land Rover. The X-Type was produced for a single generation from 2001 to 2010, and in 2014 it was succeeded by the Jaguar XE (X-Type XE) to the present (2021).

The XE’s cabin is appealing and is well arranged. Its layout is intuitive, it’s a five-seat four-door car with comfortable seats covered in either leather or cloth upholstery.

The XE comes fitted with a turbocharged 2.0-liter inline-4 petrol engine that produces 237 hp. This engine transfers power to the wheels via an eight-speed automatic transmission.

The average fuel consumption of this engine is 13 km/l.

Jaguar (Daimler) Sovereign is a luxury sedan manufactured by British automotive manufacturer Jaguar Cars carrying the Daimler badge. The Daimler Sovereign was produced between 1966 and 1983 and was succeeded by the Jaguar Sovereign from 1997 to 2003.

The Sovereign comes fitted with a 4.0-liter V8 petrol engine that produces 290 hp. This engine is mated to a six-speed automatic transmission.
This engine has an average fuel consumption of 9.8 km/l.

The Jaguar S-Type is an executive car that was manufactured by Jaguar Cars from 1963 to 1968, and then revived again in 1999 and lasted to 2008.  The S-Type is a four-door five-passenger notchback saloon.

The facial looks of the S-type are the signature oval grille and four round headlights.

The S-type has a classic interior with enough space. The seating position is great, with deep seats that are supportive and comfy. The dash is not that modern with the instrument panel and dials looking a bit old-fashioned, but easy-to-use and logical. The interior looks robust with features such as a well-working electronic parking brake. The S-type has a big transmission tunnel which eats up most of the mid-rear seat legroom making the rear seat suitable for two passengers rather than three. The rear seats fold in a 60:40 split creating extra cargo space. The S-type has a 400-liter boot.
Features found on the S-type include leather upholstery, burl walnut wood finishing on the doors and dash, dual-zone climate controls, a moonroof, and 17-inch wheels.

The S-Type comes fitted with a 3.0-liter DOHC 24-valve inline-6 petrol engine powered by a 235 hp. The engine transfers power to the wheels via a six-speed automatic transmission.

Jaguars are classic and prestigious cars, and more significantly is that recently some of these models have been sought after cars as their value is appreciating. The models that we have taken a brief look at in this article are all great cars, but each one is unique in its own way. We hope this article has enlightened you with regard to Jaguars, and now you have already made your choice. Please visit BE FORWARD and choose your Jaguar.