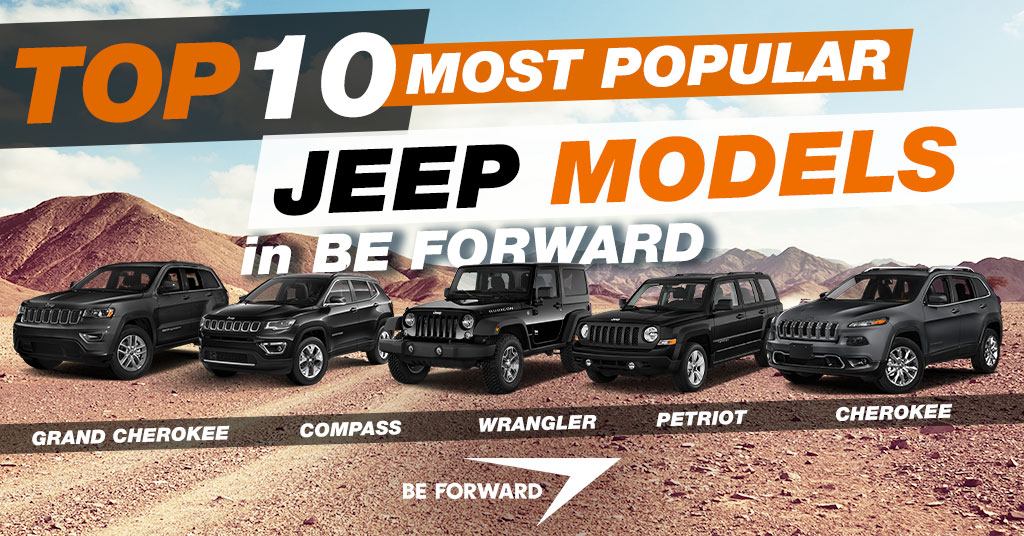 Jeep is an American automotive manufacturer that specializes in producing SUV vehicles with its first civilian model off its production line released in 1945. Jeeps can easily be identified by their distinctive seven-slot front grille design.

In this article, we are taking a brief look at 5 of the most popular Jeep models in BE FORWARD.

The Jeep Grand Cherokee is a midsize luxury SUV manufactured by Jeep from 1992 to the present. The fifth and current generation Grand Cherokee was released in January 2021.

The 2018 Grand Cherokee is available in seven trims starting from the base Laredo trim. Other trims listed sequentially are Limited, Trailhawk, Overland, Summit, SRT, and Trackhawk. The Laredo and Limited trims are well-packed with a good variety of features and are also less expensive compared to the higher trims.

The Grand Cherokee comes fitted with a 3.6-liter inline-6 petrol engine that produces 296 hp as standard. An optional 5.7-liter V8 petrol engine that produces 475 hp is available.
The Grand Cherokee is a good offroader it comes fitted with several offroading features such as a four-wheel-drive, skid plates, a limited-slip differential, and a terrain selector.

The Jeep Compass is a compact crossover SUV manufactured by the American company Jeep. The Compass was introduced in the year 2007 and is in its second generation from 2017.

The 2018 Compass is available in five trims starting from the base Sport trim. Other trims listed sequentially are Latitude, Altitude, Limited, and Trailhawk.
Standard interior features of the Compass include a Uconnect infotainment system with a 5-inch touch screen, two USB ports, Bluetooth, six speakers, a rearview camera, cloth upholstery, air conditioning, a 60/40-split-folding rear seat, and a push start button.

The Compass is driven by the Front-wheels as standard. If you want a 4×4 then skip the base (Sport) model.

The Compass comes fitted with a 2.4-liter inline-4 petrol engine which produces 180 hp. This engine is mated to a six-speed manual or automatic transmission as standard on FWD models with the option of nine-speed on the 4WD model.
The Compass has an average fuel consumption of 11.7 km/l.

The Jeep Wrangler is a compact/mid-size 4×4 off-road SUV manufactured by the American car manufacturer Jeep from 1986. The Wrangler is currently in its fourth generation which was released in late 2017.

There are four trims of the 2018 Wrangler, starting with the base Sport, followed by Sport S, Sahara, and Rubicon. The Sport trim lacks most of the standard convenience features such as keyless entry, power windows, or air conditioning. If these features are important to you, then should opt for the higher trims.
All trims except the Sahara are available in a two-door or four-door body style. The Sahara is available as a four-door model only.

The Wrangler comes fitted with a 3.6-liter inline-6 petrol engine which produces 285 hp and 260 lb-ft of torque as standard. An optional turbocharged 2.0-liter inline-4 petrol engine that produces 270 hp and 295 lb-ft of torque.
These engines are mated to a six-speed manual transmission as standard and eight-speed automatic as an option. The average fuel consumption of these engines is 9km/l and 10 km/l respectively.

The Jeep Patriot is a compact crossover SUV manufactured by the American automotive company Jeep since 2006. The Compatriot was in production from 2006 to 2017.

The Patriot is a five-seat car with a very neat and cleanly styled cabin. This cabin has enough headroom and legroom on both front and rear seats. The Compatriots seats are not very supportive nor comfortable, they are covered in cloth upholstery as standard, with leather and heated seats as options. The steering wheel adjustments are limited making it difficult for tall drivers to find a suitable position.

Standard interior features include a 6.5-inch touch screen, a CD player, a nine-speaker stereo with a pair of flip-down on the cargo area, Bluetooth, and satellite radio. Optional features include air conditioning, power door locks, and power windows.

The 2017 Patriot comes fitted with either a 2.0-liter inline-4 petrol engine that produces 158 hp, or a 2.4-liter inline-4 that produces 172 hp. These engines are mated to a five-speed manual transmission and front-wheel drive as standard. There is an option of a CVT or a six-speed automatic transmission in an all-wheel-drive drivetrain available.

The Jeep Cherokee is a midsize SUV manufactured by the American automotive company Jeep. The Cherokee was introduced in 1974 and has been in production ever since, with the latest release being the 2021 model still part of the fifth generation which began in 2014.

The Cherokee has a spacious, well-built, and elegantly styled cabin with five seats arranged in two rows. The front and rear seats are comfortable, cushy and supportive, with the rear seat capable of sliding and reclining which enables tall passengers to adjust the seats to a comfortable position. The seats also offer ample legroom and headroom in both rows. Cloth upholstery is standard, with the option of leather, ventilated, and heated seats.

Jeep is the pioneer of offroading, they are still good at that to date, and that is what we have learnt while preparing this article. But unlike the Jeeps of yesteryears, the ones we have reviewed here have added the latest amenities, a touch of luxury and more.
Please visit BE FORWARD and check out our list of Jeeps and we are sure you’ll find a suitable one for you.