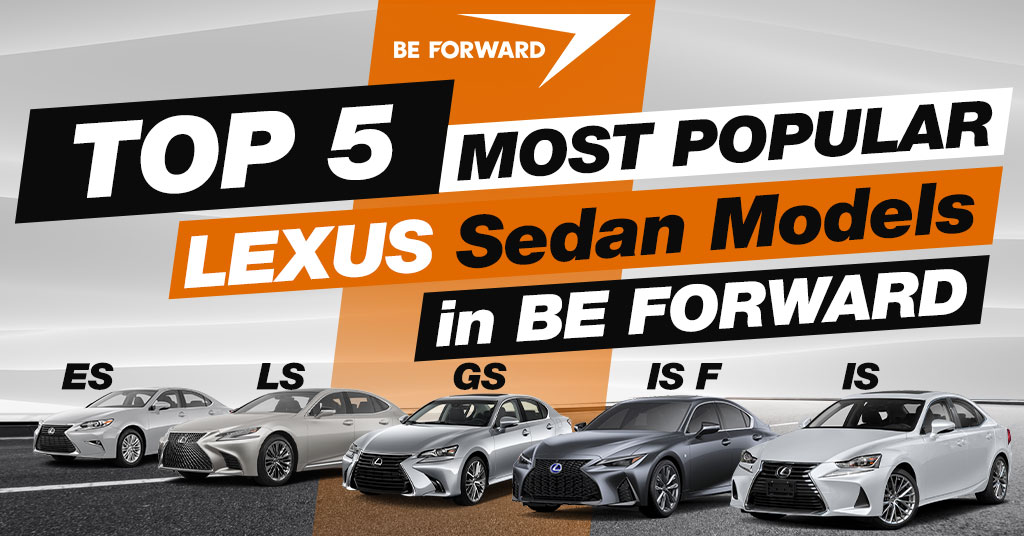 Lexus is a well-known luxury brand of Toyota Motors that manufactures and markets modern, high-quality, reliable, safe, and fuel-efficient cars. Lexus is one of the biggest top-selling luxury brands that offer cars with powerful engine options, exquisite exterior, futuristic interiors, fuel efficiency, and a budget-friendly price. This makes it a reason why customers still can’t get enough of these luxurious models. Now, let us talk about the Top 5 Most Popular Lexus Sedan Models in BE FORWARD.

The Lexus IS F is the F marque version of the Lexus IS that was first introduced on 8 January 2007. The IS F is a mid-size sports sedan with excellent performance and huge horsepower for serious racing lovers. The IS F comes with standard features which include airbags, navigation, iPod/USB connectivity, Bluetooth, voice commands, keyless entry, XM Satellite Radio, electric power steering system, LED daytime running lights, power seat, air conditioning, an anti-lock braking system, electronic brake-force distribution, vehicle stability control, and brake assist. The Lexus IS F is powered by a 5.0 L 2UR-GSE V8 petrol engine producing power and torque of 311 kW (417 hp) at 6600 rpm, 503 Nm (371 ft⋅lb) at 5200 rpm mated to an eight-speed AA80E automatic transmission.

Lexus models are one of the most popular luxury cars in the world. Whether the current model or used cars, Lexus cars are still placed as one of the top-selling brands in the automotive market. Lexus continues to offer high-rated reliability, fuel efficiency, advanced technological system, and state-of-the-art interiors on their models. All for comfort, safety, and to give a pleasant driving experience for the driver and passengers. Added to its attractive design and luxurious appearance, it really stands out on the road. So, what are you waiting for? Browse the BE FORWARD store to get your own Lexus car today.