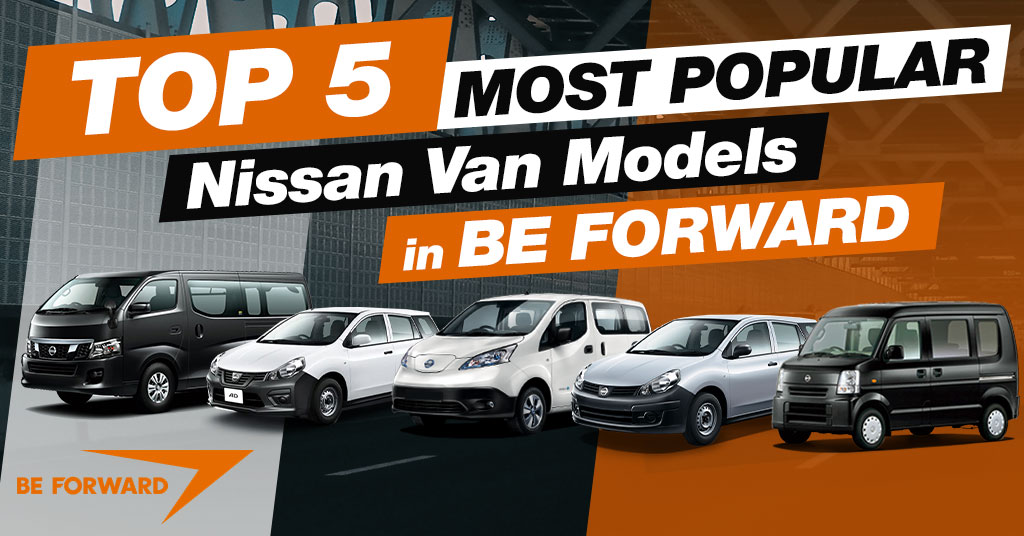 Nissan is one of the well-known and top automakers around the world which is recognized for manufacturing and selling reliable, safe, modern, fuel-efficient, and high-quality cars. Nissan boasts its top-of-the-line car models that can compete with some of the best cars in the automotive market. Added its state-of-the-art features, comfortable interior, and reasonable price, Nissan really gives a pleasurable driving experience. Now, let us take a look at the Top 5 Most Popular Nissan Van Models in BE FORWARD.

The Nissan Clipper was initially available as a truck known as Prince Clipper and in 2003, the Nissan Clipper Van was introduced as the NV100, the rebadged version of the Mitsubishi Minicab. The Clipper Van offers a large cabin with a decent cargo area and also comes with some notable features including driver and passenger airbags, power windows, power steering, air conditioning, radio, an anti-lock braking system with an electronic brake-force distribution, and a hill-start assist system. The Nissan Clipper is fitted with a 660 cc R06A DOHC straight-3 engine producing power of 48 hp at 6000 rpm, and a 660 cc R06A turbo engine producing power of 64 hp at 6000 rpm coupled either with three-speed automatic or five-speed manual transmission.

The Nissan AD Expert is the successor of the Nissan Expert which was produced in 2006 and is now one of the top models of the Nissan AD range. The AD Expert Van is a subcompact car that comes with plenty of space in the cabin and cargo area as well as fitted with some impressive standard features which include driver and passenger airbags, an anti-lock braking system, keyless entry, radio, power steering, power windows, and air-conditioning. The Nissan AD Expert is powered by a 1.5 L HR15DE straight-4 petrol engine producing power of 82 kW (111 PS), a 1.6 L HR16DE straight-4 petrol engine producing power of 80 kW (109 PS), and a 1.8 L MR18DE straight-4 petrol engine. These engines can be paired either with a CVT or four-speed automatic transmission.

The Nissan Vanette is available in a van and pickup truck that was produced from 1978 until 1994 by Nissan and continued as the rebadged version of Mazda Bongo from 1995 till 2011. The Vanette Van is a five-door van with a rear mid-engine, rear-wheel-drive layout and offers some standard features which include airbags, air conditioning, brake assist, anti-lock braking system, electronic brake-force distribution, power windows, power door locks, and power steering. The Nissan Vanette Van is equipped with a 1.6 L or 1.8 L petrol engine producing power and torque of 75 kW (102 PS), 147 Nm (15.0 kgm), and a 2.3 L diesel engine. Engines can be paired either with a four-speed automatic or five-speed manual transmission.

The Nissan Caravan is a four / five-door van that was first produced in 1973 and is now in its sixth generation. The Caravan comes with a front-engine, rear-wheel drive layout, and four-wheel-drive option with some notable standard features which include driver and passenger airbags, side airbags, air conditioning, power steering, power windows, emergency city brake, anti-lock braking system, and keyless entry. The Nissan Caravan is equipped with a 2.5 L YD25DDTi straight-4 turbocharged and intercooler diesel engine producing power 129 PS and torque of 356 Nm; a 2.0 L QR20DE straight-4 petrol engine producing power 130 PS and torque of 178 Nm; and a 2.5 L QR25DE straight-4 petrol engines producing power 147 PS and torque of 213 Nm. These engines are coupled either with a five-speed manual or five-speed automatic transmission.

Nissan Vans are one of the most popular models worldwide, boasting an abundance of cabin space, comfortable interiors, and versatility. It also offers impressive standard features for the safety and comfortability of the occupants. In addition, the fuel efficiency Nissan Vans offers is one of the best in its class with exquisite styling and outstanding engine performance, which makes it more appealing to buyers. Whatever model you’re looking for, Nissan offers a variety of options for you. So, what are you waiting for? Visit our BE FORWARD store to start your purchase now.