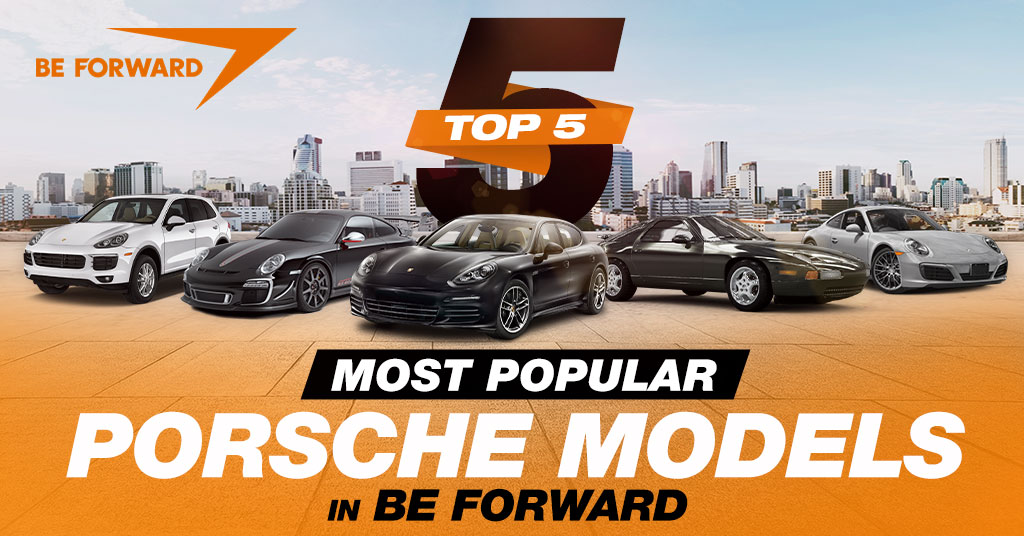 Porsche is a German automobile manufacturer founded by Ferdinand Porsche and his son Ferdinand (“Ferry”) in 1948. Porsche is best known for manufacturing high-performance sports cars, racecars, sedans, and SUVs, with headquarters in Stuttgart, Germany.

The first Porsche model was the aerodynamic “356,” which proved a success, and marked the beginning of what we know today as Porsche cars. Currently, Porsche has several great cars on its lineup, but in this article, we choose to take a brief look at 5 of the most popular Porsche models in BE FORWARD. Please read on

The Cayenne is a five-door SUV with exterior features such as the 911 inspired LED headlamps, long swooping bonnet, a trio of large air intakes that give it an aggressive look, LED taillights, alloy wheels, and a sharply contoured roofline.

The interior of the third generation Cayenne features a centralized 12-inch touchscreen on a low-profile dashboard, the driver is treated with a multifunctional steering wheel with a classic Porsche instrument cluster that features a large central rev counter flanked by a pair of high-resolution configurable displays that can display instruments, maps or other car info.
Other features include Porsche’s advanced cockpit, Porsche communication management system, Porsche Connect with Appl CarPlay, a standard 10-speaker 150 Watts system, or a BOSE 710-Watt surround system, or a 21-speaker Burmester high-end surround system.

The Cayenne comes fitted with comfortable and supportive sports seats that offer enough head-, leg-, knee-, and shoulder room for all occupants. The rear bench slides back and forth enabling the adjustment of leg or luggage space. The Cayenne has a 770-liter (745-liter for the turbo model) boot which extends to 1710 liters with the rear seats folded, while the hybrid model has a 645-liter boot that extends to 1610 liters with the rear seat folded flat.

The Porsche 911 is a two-door four-seat rear-engined sports car manufactured by the German automotive manufacturer Porsche AG from 1964 to the present. The 911 has continuously evolved and undergone numerous enhancements in its seven generations while sticking to its basic concept.

The 911 styling has remained the same with minor tweaks on the head and tail lights. The interior is posh and well adorned with nice trim and high-quality materials. The dash is neatly finished and features a multifunctional display and touchscreen at the center.
The 911 is a four-seater, but in a true sense, it’s a two-seater as the rear seats are not usable. The front sports seats are livable, comfortable, and bolstering.
Standard features of the 911 include a 4.2-inch multifunction display, a 6.5-inch touchscreen with Apple CarPlay, Bluetooth, and USB, an eight-speaker audio system, a rearview camera, power-adjustable front seats, 19-inch wheels, xenon headlights, and an Alcantara headliner. Higher trims add keyless ignition, cooled seats, 14-way adjustable heated front seats, and adaptive headlights.

The Panamera is a true luxury car with a lavishly rich interior and an elegant cabin finished with sumptuous materials. The Panamera is a four-seat car with standard features such as heated and power-adjustable front seats and partial leather upholstery. Optional features include massaging front seats, full leather upholstery, heated rear seats, ventilated front and rear seats, power-adjustable rear seats, power rear-seat sunshades, and a heated steering wheel. The Panamera has enough leg-, head-, and knee room in both rows of seats.

The Panamera is fitted with capable engines with each bettering the other. The base engine is a 330 hp V6 while the most exhilarating performer is the twin-turbo V8 that produces 550 hp fitted in the Panamera Turbo S trims. The 2017 Panamera 4 E-Hybrid is a PHEV fitted with an electric motor and a twin-turbocharged V6 engine that combine to produce 462 hp.
These engines are mated to an eight-speed automatic transmission as standard.

The Porsche 928 is a luxury coupe that was produced by the German car manufacturer Porsche AG from 1978 to 1995. The 928 was introduced as a luxury alternative that was meant to replace the iconic 911, it featured equipment typical of luxury sedans, it also provided comfort, power, and a sports car feeling.

There are four trims of the 928, beginning with the S2, S3, S4, and the GTS which was the last on the production line. The styling differences are that the 1978/79 model had no front and rear spoilers. Front and rear spoilers were introduced from 1980 through 1986. Models released from 1987 through 1995 had their front spoilers fused to the nose while the rear spoiler became a separate wing. This release also featured side wings, a redesigned taillight, and the GTS model was fitted with wide rear side fenders to accommodate its 9-inch wheels.

The 928 features some quality and innovative designs that made it a wonderful Grand Tourer. Like most GT’s the 928 has tiny rear seats while the front electrically adjustable sports seats are comfortable and supportive.

The 928 was unveiled with a 4.5-liter V8 petrol engine with 232 hp, while later models so their engines grow in size to 4.7 liters with 240 hp, 5.0 liters with 315 hp, and finally a 5.4-liter engine with 335 hp. These engines transferred power to the rear wheels via either a three-speed automatic, four-speed automatic or five-speed manual transmission.

The 718 Cayman is available in one body style with its engine placed in the middle. The Cayman is a compact sports car, with a small footprint which makes it an ideal car for manoeuvering in small spaces and parking.

The Cayman comes in a two-seat layout, that offers a decent amount of knee, head, and shoulder room, with plenty of adjustments to get yourself comfortable. As standard, the Cayman comes with partial leather sports seats with great support, but if that is not enough, you can opt for the firmer full-leather Bucket Seats for a fee.

Porsche is a company that is best known for its production of sports cars that are powerful, reliable, and precise in handling. The iconic 911 is the most famous in the lineup. But still, Porsche has not relaxed, it continues to be innovative and improve its cars, and as a result, most Porsche owners seem to be satisfied with their cars.

From this brief review, we hope we have been able to shed some light on the five Porsche models that we have reviewed and we would like to conclude by saying “Porsches are durable and comfortable cars that can be used for daily driving”.

Please visit BE FORWARD and check out our list of 800+ Porsches that you can choose from.