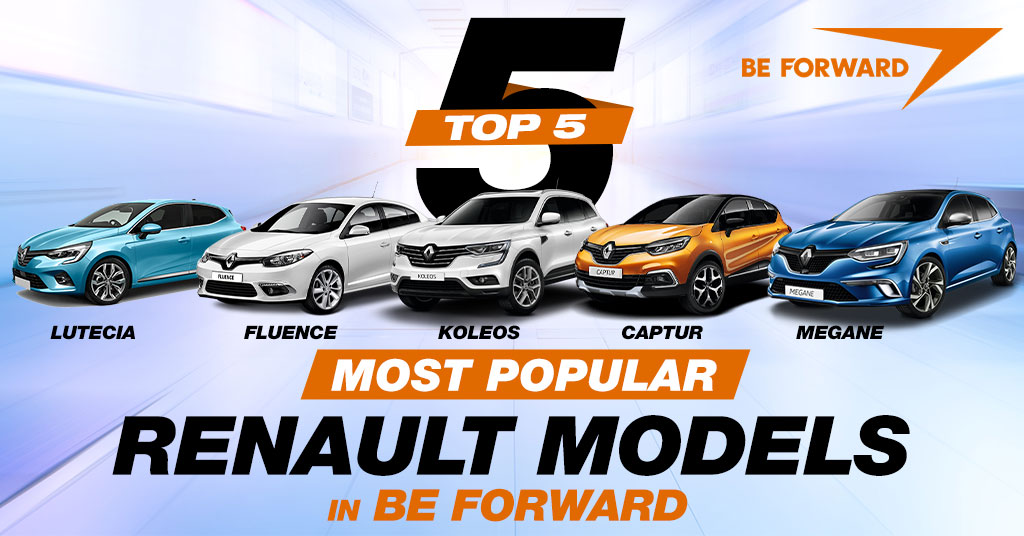 Renault cars are multipurpose vehicles manufactured by the French multinational car manufacturer Renault Group from 1899. The company produces a range of cars and vans, with their first production car being the Renault Voiturette 1CV released in 1898.

Like many old car manufacturers, Renault established themselves in motorsports, particularly rallying, Formula 1, and Formula E which were means of defining a car’s worth and a marketing technic then.

In this article, we will take a brief look at 5 of the most popular Renault models in BE FORWARD in trying to see what makes them popular and to inform you the reader. Please read on.

The Renault Clio (known as Renault Lutecia in Japan) is a hatchback, produced by French car manufacturer Renault. The Clio was launched in 1990 and is currently on its fifth generation from 2019.

The Clio is one of Europe’s top-selling cars since its launch, and it is one of only two cars to have ever been voted as European Car of the Year twice, a feat that it accomplished in 1991 and 2006.

The Clio has enough legroom and headroom for front-seat occupants, while rear seats are better suited for children or medium-built adults, tall people will struggle for knee- and legroom. The Clio has a 391-liter boot which is one of the best if not the best in its class.

The Renault Fluence is a compact sedan manufactured by the French automaker Renault. The Fluence was unveiled in the year 2009 and remained in production until the year 2018 when it was replaced by the Renault Megane.

The Fluence is available in a choice of four trims which are the Expression, Dynamique, Limited, and R-Link. The entry-level Expression comes fitted with standard features such as front electric windows, hands-free keyless entry, air-conditioning, and 15-inch alloy wheels. While upper trims add features such as the R-Link 7 inch infotainment screen, Sat Nav, leather-wrapped steering wheel, half leather upholstery, and 17-inch alloy wheels.

The Fluence’s cabin is spacious and offers good levels of comfort for front and back seat passengers, with enough legroom and headroom throughout. The Fluence has a 530-liter boot which is very impressive, it can accommodate luggage and other large items. If the need arises for extra boot space, the rear seats can be folded to extend the boot for further versatility.

The Renault Fluence comes fitted with a 1.5-liter diesel engine that produces between 93 hp and 108 hp. The engine is mated to either a five-speed manual, six-speed manual, or six-speed automatic transmission. The manual gearbox has a better response compared to the automatic which is a little sluggish.

The Renault Koleos is a compact crossover SUV manufactured by the French multinational automotive manufacturer Renault. The Koleas was unveiled in 2006 and is in its second generation from the year 2016.

The Koleos’ exterior is curvaceous from the sides, while the front facial styling features a Renault badge, L-shaped daytime running lights with chrome highlights, and at the rear, there are nice slim tail-lights.

Interior space is reasonable with enough comfort in the cabin. The Koleos has enough legroom and headroom for both front and rear passengers.

Under the hood, the Koleos is fitted with a 2.5-liter inline-4 petrol engine that produces 169 hp and 166 lb-ft of torque. The engine is mated to a CVT automatic with a manual mode. There are other optional engines on offer.

The Renault Captur is a subcompact crossover SUV manufactured by the French multinational automaker Renault. The Captur debuted in the year 2013 and received a mid-life facelift in 2017.

The interior features soft-touch plastics throughout, and a nice dashboard. The 2017 and above Captur models have ample leg and headroom for all five occupants, and the seats are comfortable and supportive. The rear seat can slide back and forth to increase boot or legroom. The Captur has a 422-liter boot that extends to 536 liters with the seat moved forward.

The Renault Mégane is a small family hatchback built by the French automotive manufacturer Renault. The Megane was unveiled in 1995 and is currently on its fourth generation from 2016.

The exterior of the Megane is eye-catching, with the trademark diamond logo at the front, flanked on either side with headlamps surrounded by C-shaped LED DRL’s. At the rear, there are nice LED tail-lights almost running the width of the boot lid.

The front seats of the Megane are comfortable and supportive, while the rear seats are a bit short of legroom. The Megane has a 434-liter boot with rear seats in place, the boot extends to 1237 liters with seats folded.

Renaults have become so stylish, feature evolutionary looks, are reliable, and offer pleasant and fun rides. By the brief look we have taken on these five models, we agree that Renaults are great cars, just that some people tend to overlook them when looking for their next car. We advise you to consider a Renault when the time arrives and you are looking for a car to buy, and surely you’ll agree with us that these are great cars.

Visit BE FORWARD and check out our large stock of Renaults.