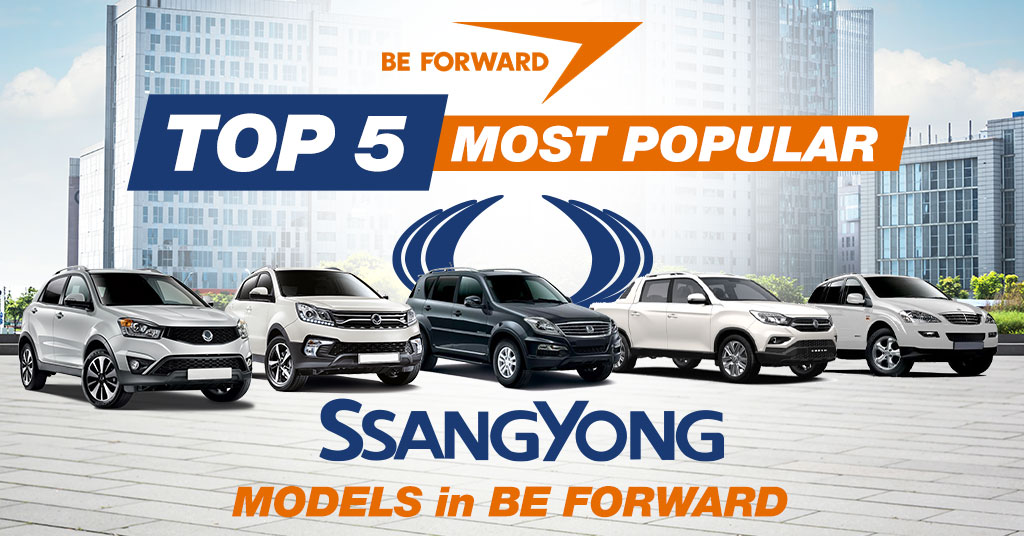 In this article, we focus on five of the most popular SsangYong models in BE FORWARD by taking a look in brief detail at what makes them popular. Please read on

The SsangYong Actyon is a compact SUV manufactured by the South Korean automotive manufacturer SsangYong Motors. The first generation Actyon was in production from 2005 to 2011, and the second generation was launched in 2012 to the present.

The Actyon’s face features a fabulous nose with shark-like character lines running from the rear to the windscreen, while at the rear the Actyon features a bobtail.

The instrument cluster of the Actyon features a speedometer, tachometer, and a collective of the coolant temperature and fuel gauges in front of a steering wheel with several audio control buttons. Standard features include a digital mp3 music player with a small screen that also functions as a reverse camera display, CD/stereo, and air conditioning.

The Actyon comes fitted with a turbocharged 2.0-liter diesel engine with 139 hp and 228 lb-ft of torque. This engine was mated with a four-speed automatic transmission and includes a part-time four-wheel drive.

The SsangYong Korando is a compact crossover SUV manufactured by the South Korean automobile manufacturer SsangYong from 1983 to the present with a brief hiatus from 2006 to 2010. The Korando is currently on its fourth generation launched in 2019.

The 2019 Korando has an attractive and nicely designed cabin. At the front, you are greeted by a standard 10.2-inch high-tech virtual cockpit, the seats offer generous headroom and legroom for even the tallest of occupants.
The Korando is practical as well with features such as deep door pockets, a glove box, two cupholders between the front seats, a single USB port, a 12V outlet, and storage space underneath the infotainment system.
The Korando has a 551-liter boot with the rear seats in place which extends to 1248 liters with second-row seats folded flat.

Other standard features on the Korando include cruise control, Bluetooth connectivity, 17-inch alloy wheels, plus auto lights and wipers.

The SsangYong Rexton is a mid-size SUV produced by the South Korean automotive company SsangYong Motors which debuted in 2001. The Rexton is currently on its second generation from 2017 to the present.

The 2017 Rexton is very well equipped. It comes with an 8-inch (9.2-inch on higher trims) user-friendly infotainment system. It is fitted with cloth upholstery as standard, while the higher trims have Napper leather. The dash features a classy wooden finish as standard.

The SsangYong Musso pickup is a car pickup truck manufactured by SsangYong Motors. The Musso pickup was launched in 2018 and is still in production. There was also a double cab Musso pickup that was produced between 2002 and 2005 named Musso Sports.

The standard Musso pickup released in 2018 is one of the shortest pickups due to its small load base, but in 2020 the Rhino LWB (long-wheelbase) was released.

The Musso has an impressive cabin layout that feels more SUV-like. The seats are comfortable and supportive, with enough knee, leg, and headroom for both front and rear passengers even with tall occupants at the front and rear.

The Musso comes with an 8.0-inch infotainment touchscreen with Apple CarPlay and Android Auto, USB, Bluetooth connectivity, and a reach and rake steering.

The Musso has several storage options which include front and rear cupholders (in a fold-down armrest), rear and front door bottle holders, center console tray, and sunglass holder.

The SsangYong Kyron is a mid-size SUV manufactured by the South Korean company SsangYong Motors. The Kyron was produced from 2005 to 2014.

The front-end of the Kyron looks nice and well-proportioned, with a high waistline that gives it a muscular and sporty appearance. The Kyron is a five-seat car with comfortable and supportive seats that offer enough leg, knee, and headroom.
Cloth upholstery is standard, with leather as an option on the top-spec model.

The Kyron’s instrument cluster resembles that of the Actyon which features a speedometer, tachometer, and a collective of the coolant temperature and fuel gauges in front of a steering wheel with several audio control buttons. Standard features include a CD/mp3 stereo music player with a small screen which also functions as a reverse camera display and air conditioning.

SsangYong is a company that has gone through lots of ups and downs over the years, with their cars identified as ugly. Now, the time has passed and SsangYong has done their homework by reviewing their designs and engines and it seems they are on the right path. In  2018 HonestJohn car owners survey ranked the SsangYong as the best car based on the customer satisfaction index.
Based on our review, we can conclude that all the models reviewed are great cars in their own right from design, price, reliability, and performance. Please visit BE FORWARD and explore our list of SsangYong cars to choose your next car.