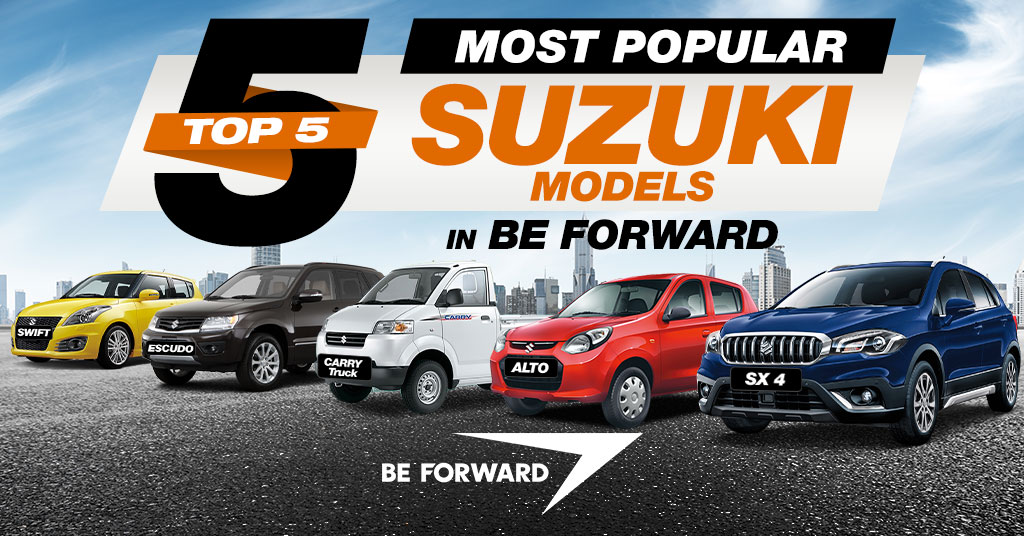 Suzuki cars are excellent choices for people who are interested in purchasing a used car or SUV, without having to worry about parts supply or falling resale values.
Suzuki’s are renowned for their durability regardless of the terrain, but the company also considers sustainability and reliability in their production activities.
Suzuki’s are designed with the user in mind to make sure you get a good value. A thorough cost-benefit analysis is usually performed, resulting in cars that offer high specifications, affordable range, great fuel efficiency, and low emissions without compromising value and driving experience. But apart from this, Suzuki’s are also built with safety in mind, with all models built with several safety features depending on the year of manufacture and trim.
In this article, we will take a look at the 5 most popular used Suzuki models sold by BE FORWARD.

The Suzuki Swift is a 5-door 5-seat subcompact car produced by Suzuki. The story of the Swift goes back to the early ’80s when it was produced as a rebadged Alto to 2004 when it became a stand-alone model to the present.
The Swift has utilized several engines within the years that range from 1.2-liter engines to 1.6-liter engines that transfer power to the wheels via 4-speed, 5-speed, or 6-speed manual and automatic transmissions. The average fuel consumption of these engines ranges from 18 km/l to 21 km/l with output power ranging between 80 hp and 120 hp.

The swift’s design is so stylish upright, with wide-opening doors that make entry/egress easy.

The interior (details may differ depending on model year and trim) features a beautiful dashboard, upright pillars that offer good forward visibility, some generous headroom, a driver’s seat that offers a great degree of adjustability, and a tilt/telescopic steering column.

The center console features a touchscreen display with a brilliant and logical quadrant of telephony, audio, sat-nav, and vehicle-settings functions.

Underneath, there’s an effective single-zone climate control system that cools, heats and de-mystify as required.

The Swift offers several storage options upfront, including a glovebox, door bottle holders, and room for small items in the lower console.

The swift comes with a 242-liter boot that can be extended to 556 liters with seats folded.

Suzuki Escudo also referred to as Suzuki Vitara in other markets is a compact SUV manufactured by Suzuki Motors Japan. The production of the Escudo commenced in 1988 and is now in its fourth generation.
The earlier 1st generation models were available as 3-door 4-passenger cars, with the 5-door 5-passenger model introduced later.

The Escudo has a nice interior that kept improving with every release. The front seats are comfortable even on long trips, while the rear seats are a bit firm but spacious, with plenty of head and legroom.

The Escudo has a boot that varies in size depending on model year and trims. The boot size ranges from 375 liters to 1386 liters.

The Escudo comes with several active and passive safety features (depends on the year of manufacture and trim), including front, side, curtain airbags, emergency stop system, vehicle stability, traction control, hill start and stop system, and a rearview camera.

The story of the Suzuki Carry began in 1961 when Suzuki introduced the van. 60 years later and 11 generations later the Carry is still a force to reckon with.
The Suzuki Carry is a Kei Van produced by Suzuki to be a workhorse that is very cheap to run and hence was built with the basic functionalities to keep its prices low without affecting its performance and durability.

The interior is so basic as Suzuki wanted to make the Carry as cheap as possible. The driver and passenger space are so limited due to the size of the car. But credit should be given to Suzuki’s engineers for the wise utilization of the available space. The dashboard is ergonomically designed and comes with storage places.

The instrument panel features a huge speedometer flanked by other small indicators on either side.

The seats are a bit squeezed and offer limited adjustments that create an upright driving position and poor knee and legroom. The front visibility is top-notch and the large side mirrors offer great rear visibility with fewer blind spots.

The Alto is a 3/5-door 5-passenger car that was introduced in 1979 and is still produced.
The Alto was designed for urban life, with its small body and little engine with great fuel efficiency making it the perfect urban mobility tool.

The standard safety features include front airbags, side airbags, and side curtain airbags, ABS, and Electronic Brake Distribution.

The Suzuki SX4 is a subcompact car produced by Suzuki from 2006 to the present. The production SX4 was a joint project between Suzuki and Fiat.

The standard engine on the SX4 is a 1.5-liter petrol engine that produces 104 hp with average fuel consumption of 14 km/l. Other optional engines on the SX4 include a 1.6-liter, 1.8-liter, and 2.0-liter engine. These engines transfer power to the wheels via a 4-speed automatic, 5-speed manual, 6-speed manual, and CVT transmission.

The SX4 has good all-round visibility, which simplifies the car maneuverability. The rear seat is fitted higher than the front seats, creating welcoming under-thigh support for back-seat occupants and that extra needed legroom.

The SX4 has several useful storage areas including the glove box, bottle holders, and front-seat pockets. The SX4 comes with a meager 250 liters that can accommodate a few goodies or bags.

Suzuki is a brand that has quietly gone about its business of producing cars with great success without boasting about it. These five cars that we have briefly looked at are part of that great success that Suzuki has been building on time and time again. And one thing that has made this Japanese manufacturer succeed is keeping it simple.

If you would like to buy one of these models or any other Suzuki model please visit BE FORWARD and choose from our big list your next car. 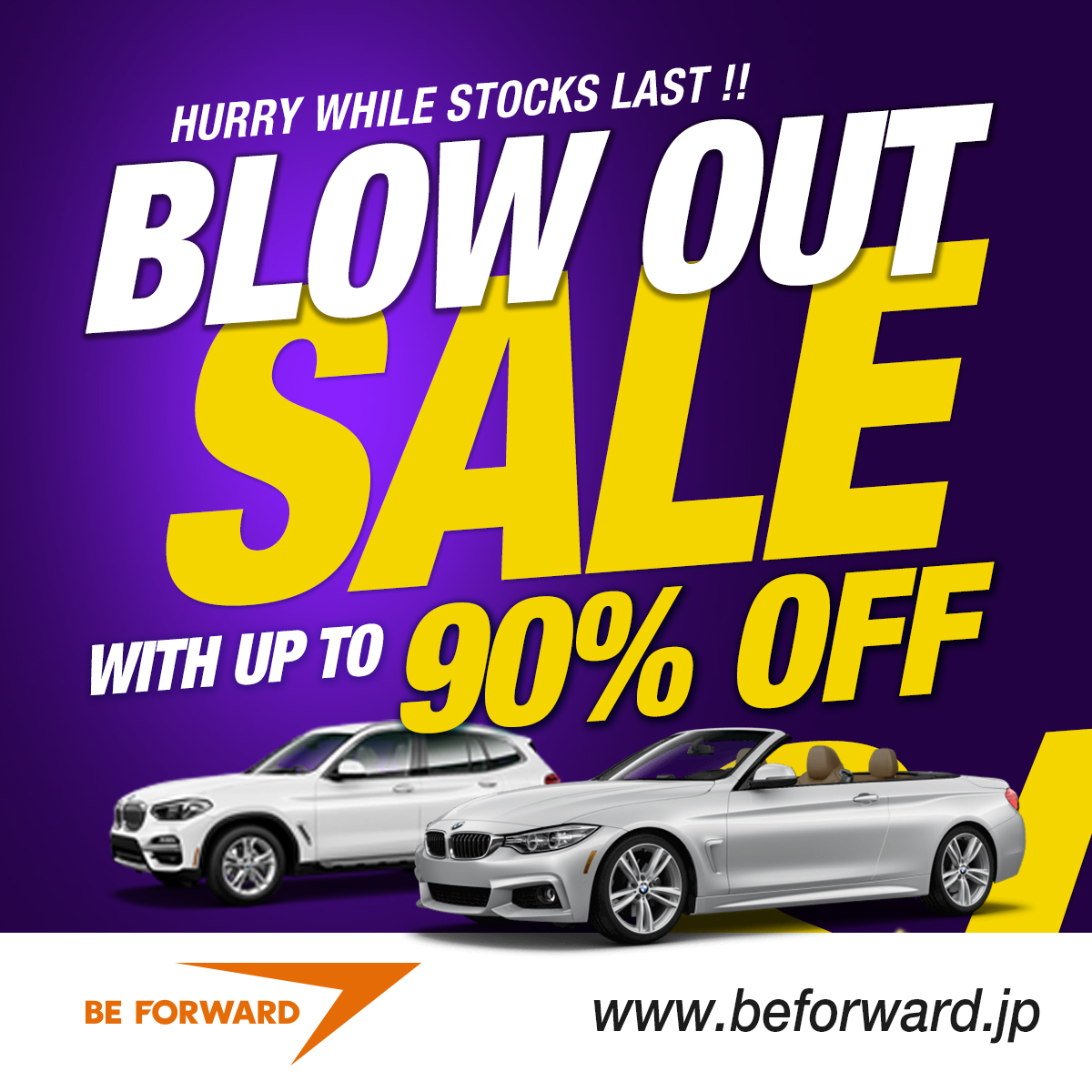