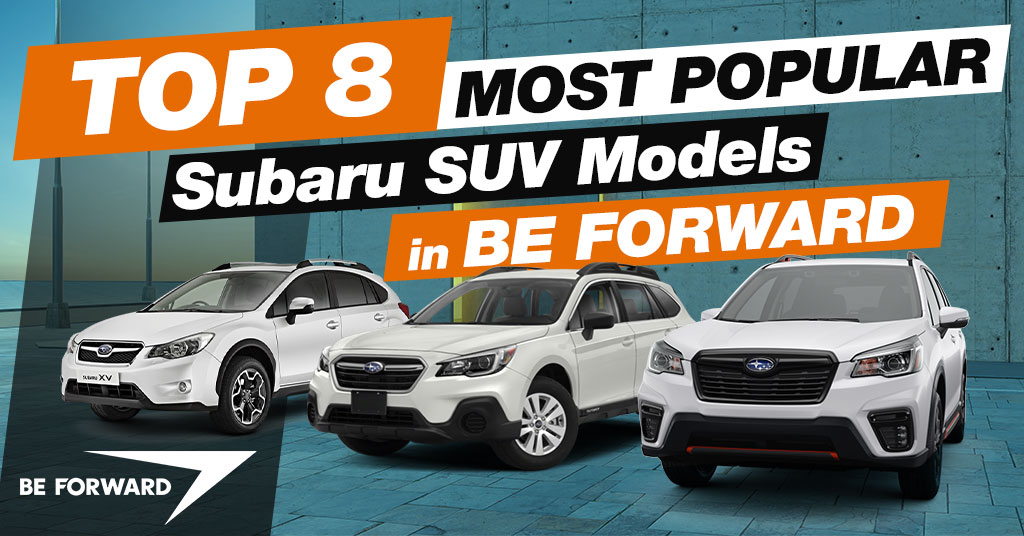 Subaru is one of the known automakers and top-selling cars worldwide. They manufactured cars with high reliability, fuel efficiency, and top-quality. Added to its stylish appearance, spacious cabin, and several engine options, Subaru can certainly offer a pleasant driving experience. In this article, we will talk about the Top 8 Most Popular Subaru SUV Models in BE FORWARD.

The Subaru Legacy is a mid-size car that was first produced in 1989 with now over seven generations. The Legacy comes with a four-door sedan, five-door wagon, and five-door crossover SUV that offers some notable standard features which include driver and passenger airbags, pre-collision system, power windows, power steering, air conditioning, anti-lock braking system, vehicle dynamic control, cruise control, and navigation. The Subaru Legacy is equipped with 2.5L FB25 H4 producing power of 175 PS (129 kW) at 5800 rpm and 3.6L EZ36 H6 producing power of 260 PS (191 kW) at 6000 rpm, mated either with a Lineartronic CVT, five-speed automatic, or six-speed manual transmission.

The Subaru XV, also referred to as the Subaru Crosstrek, is a five-door subcompact crossover SUV produced in 2012 and is now in its second generation. The Subaru XV was available in a front-engine, all-wheel-drive system with impressive fuel economy and standard features including SRS airbags, air conditioning, power windows, keyless entry, power seat, an anti-lock braking system, electronic brake-force distribution, cruise control, and brake assist. The Subaru XV is equipped with a 1.6L FB16 H4 with a power of 115 PS (85 kW) at 6200 rpm and a 2.0L FB20B H4 petrol engine with a power of 154 PS (113 kW) at 6000 rpm, mated either with a CVT or five-speed manual transmission.

The Subaru Impreza XV Hybrid is a five-door compact crossover SUV that was released in 2013. The Impreza XV Hybrid offers standard features including airbags, side mirrors with signal repeaters, electric power steering, keyless ignition, chrome door handles, multi-functional display, air conditioning, navigation, and power windows. The Impreza XV Hybrid is equipped with an AC synchronous motor with a power of 10 kW (14 PS; 13 hp) and torque of 65 Nm (48 lb-ft) attached to a Nickel hydride batteries and Lineartronic CVT delivering a fuel economy of 28 miles per US gallon (8.4 L/100 km) with a combined city/highway to 31 miles per US gallon (7.6 L/100 km).

Subaru models are now popular in the market nowadays. With their practicality, advanced features, and powerful engine, Subaru is certainly worth buying. You can visit the BE FORWARD store for more details and questions on how to purchase one now.