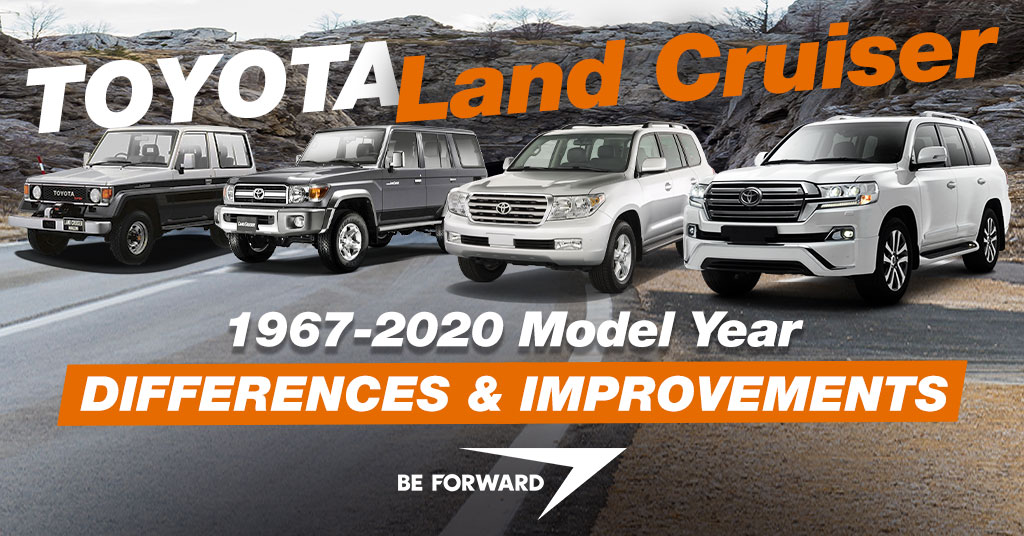 The Toyota Land Cruiser is a series of all-terrain four-wheel drive cars manufactured by the Japanese automobile manufacturer Toyota from 1951. The Land Cruiser is one of Toyota’s longest-running series of models with total sales of over 10 million units worldwide as of 2019.

The Land Cruiser has been produced in various body styles such as hardtops, soft-tops, open-top, cab chassis, pick up, and station wagon. The Land Cruiser is a car that is so popular and known for its reliability, longevity, and its all-terrain prowess.

The interior of the FJ55 like many cars of that era by today’s standards was modest and basic. Its dash is simple, it features a glovebox, an AM radio, cigarette lighter, fan and heater controls, and an instrument cluster with two cylindrical gauges, one for speedometer and odometer, and the other houses the coolant temperature gauge, fuel gauge, oil gauge, and battery charge indicator.

The three-spoke steering is simple, with three horn buttons on each spoke. Depending on the interior configuration, the FJ can seat up to 6 or more passengers, with the standard configuration of the first- and second-row seats being bench seats for three.

The FJ55 Land Cruiser came fitted with a 3.9-liter inline-6 petrol engine (Type F) that produced 125 hp and 209 lb-ft of torque and was later upgraded to 130 hp in 1969. This engine was mated with either a 3-speed or 4-speed manual transmission that transfers power to the rear, or both front and rear wheels depending on the drivers’ selection of 2WD or 4WD.

In 1975 Toyota replaced the F engine with a 2F engine in order to comply with the local Japanese emission standards. The new engine was the FJ56V (Type 2F), which was a 4.2-liter inline 6-cylinder that produced 135 hp and 200 lb-ft of torque. This engine was mated to a 4-speed manual transmission.

In August 1980 Toyota introduced the Land Cruiser 60 Series as the successor to the 50 Series.

The external looks of the 60 Series were substantially renewed. The FJ60 was a car designed with consideration of the market trend, whereby the desire for more space-efficient cars was high. To answer this Toyota released the FJ60 which offered improved space efficiency with almost the same dimensions as its predecessor, but apart from that, the FJ60 came with the option of a high roof model. Other noticeable body changes include the mixture of flat and rounded design, the introduction of integrated front wings, and a wide grille that gave the car muscular frontal looks. In 1988 the round headlights were replaced with dual square headlights.

Toyota’s direction on the 60 was noticeably towards a comfortable interior. Some of the changes include a well-organized dashboard, good sound insulation for a much quieter interior, power steering, air conditioning, and neat striped upholstery on the seats and door panels. The 60 got rid of the front bench and introduced two separate seats for the driver and front passenger to support the driver’s posture. The flexibility of the 60’s interior could be best defined by the car offering seating for five, six, eight, nine, or ten passengers. It also has a 2760-liter cargo area.

In the last quarter of 1989, Toyota unveiled the Land Cruiser 80 Series to succeed where the 60 left off. The 80 was a completely new car from the ground up, with new styling, equipment, and specifications that transformed the car into a luxury sports utility vehicle.

Unlike the 60 which was part flat part curvy, the 80 was curvy all the way. The 80 is a five-door car with an iconic two-way tailgate with a 4WD badging and rear hatch. The front facial features dual squared-off headlights on either side of the grille with a “TOYOTA” script.

The 80 had a state-of-the-art interior then, with a six-seat configuration of two front seats, three second-row seats, and a pair of folding rear seats. Interior upholstery was either vinyl, cloth, or leather depending on the year of manufacture and trim. The 80, like the 60, comes with a standard three-spoke steering wheel that’s simple and beautiful, with the “Land Cruiser” inscribed at the center, above the horn symbol.

The 80 Series came with a 4.0-liter inline-6 (3F) petrol engine with 155 hp and 220 lb-ft of torque as standard. Later releases came with an option of several other inline-6 engines such as the 4.5-liter (1FZ) petrol engine and the 4.2-liter (1HZ, 1HD-T turbocharged, and 1HD-FT turbocharged) diesel engines. These engines were mated with either a 4-speed manual, or 4-speed automatic, and 5-speed manual.
The 80 Series came fitted with front and rear coil springs that provide a much better ride comfort.

In January 1998 Toyota released the Land Cruiser 100 as the successor to the Land Cruiser 80. The 100 continued from where the 80 left off by offering an improved luxury 4WD and bettering its four-wheel-drive performance. Like its predecessor, the 100 is a 5-door body-on-frame wagon, with a slightly much larger cabin.

The interior of the 100 is offered with a wide choice of upholsteries and features. Even in its standard form, it’s still luxurious, with amenities such as cloth seats, air-conditioning, high-end audio, to the full spec fitted with leather seats, climate control, sunroof, DVD player, and navigation system. The 100 is available as a five-seater or seven-seater with third-row jump-seats.

Underneath, the 100 employs an independent double-wishbone and torsion bar spring system. The high spec VX Limited features an optional mechanism that combines Active Height Control (AHC) with the Skyhook TEMS.

The 100 came with a new 4.7-liter V8 DOHC 32-valve (2UZ-FE) petrol engine with 235 hp and 320 lb-ft of torque, or an optional turbocharged 4.2-liter inline-6 24-valve (1HD-FTE) direct-injection EFI diesel engine These engines were mated with either a 4-speed automatic, 5-speed automatic, or 5-speed manual transmission. The drivetrain configuration employed a full-time 4WD system with a sub-transmission.

In September 2007 Toyota unveiled the Land Cruiser 200 Series as the successor to the 100 Series. The 200 has been built on a redesigned frame structure that improves the SUV’s durability, rigidity, interior comfort, and collision safety.

The 200 is indeed a luxury SUV with features such as a heated steering wheel and seats, USB ports, leather upholstery, a high-end sound system, a user-friendly infotainment system, and a quiet and comfortable cabin.

Apart from the interior and exterior cosmetic changes made to the 200 received some significant upgrades that included smart entry, smart start as standard and four-zone climate control, 10 airbags on the high-end models. The driver is also treated with several driver-assist technologies such as Downhill Assist Control, CRAWL, and KDSS.

The 200 came fitted with the world’s first “crawl control” feature which automatically maintains a very low speed (crawl) when driving on terrains such as sand, or rocks and on steep hills.

In June 2021 Toyota unveiled the new Land Cruiser 300 Series. The Land Cruiser 300 is a completely new design built on the TNGA-F platform. The 300 is built with the primary objective of evolving the inherited Land Cruiser spirit of “durability, reliability, and off-road prowess”, but also creating a handling experience that allows the driver to drive with ease on any terrain without tiring easily.

The 300 Series design focuses on delivering off-road performance. Like the previous station wagon Land Cruisers, the 300 locates the cabin rearward on the body, with the headlights and the radiator grille placed high-up, and both rear and front bumpers placed and shaped to avoid obstacles. In addition, the 300 incorporates a large depression in the engine hood that improves collision safety performance and forward visibility.

Interior space is enough with plenty of room on the first and second rows, while the third row is a bit limited. The seats are covered in a soft, comfortable, and durable cloth material, while high-end models have leather upholstery.
A 9.0 or 12.3-inch infotainment display with physical buttons sits above the air-conditioning controls, which is easy to use.
There are plenty of storage facilities, with cupholders, a big two-level glovebox, and big door bottle holders.

In every corner of the world, these Land Cruisers have supported people in many ways and helped them fulfill their pursuits as well as take people to various places, and bring them back alive and safe. Further down the years, the Land Cruiser’s spirit of “durability, reliability, and off-road prowess” has further evolved, based on feedback from its global customers.

Please visit BE FORWARD and check out our list of 460+ used Toyota Land Cruisers on sale.