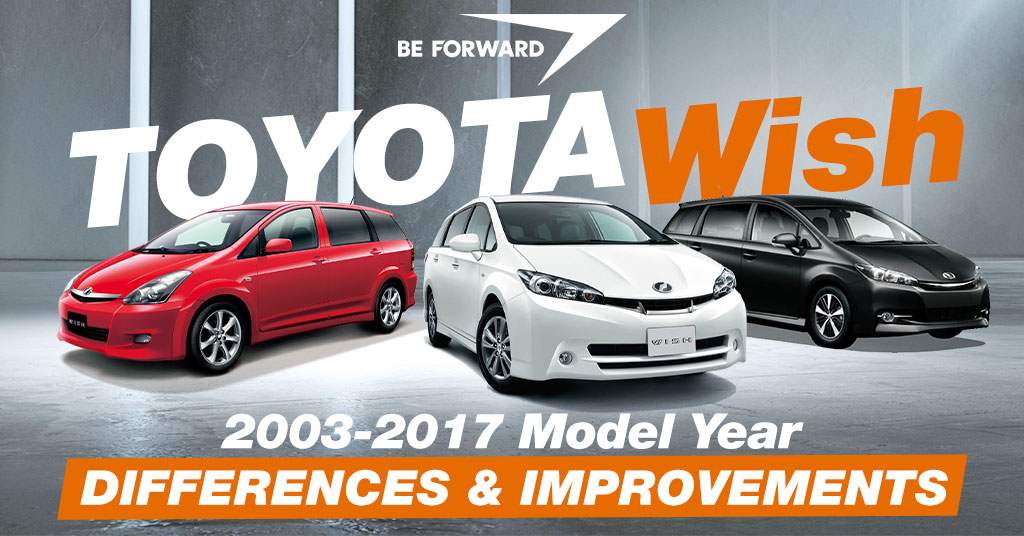 The Toyota Wish is a compact MPV (minivan) manufactured by Japanese automaker Toyota from 2003 to 2017. The Wish is available as five-door with six or seven seats.

In this article, we will take a look at the evolution of the Wish in these two generations so as to inform our readers/customers on what separates the two hoping that this information will help simplify your decision-making. Please follow through

The Wish was unveiled at the Tokyo Motor Show in late 2002 as a 2003 model. It was available on the local Japanese market by January 2003. The body dimensions of the Wish fell in the small size passenger vehicle “5 number” by Japanese standards which gave the Wish a sporty appearance with a relatively low body height.

The Wish has its seats arranged in three rows in a six or seven-seat configuration. The second and third-row seats could be split and folded, creating flat and large luggage space as needed.

In 2005 a facelifted Wish was unveiled. It featured a few cosmetic changes which included several new features that include the dashboard, headlights, LED taillights, and bumpers. The climate control buttons were also revised, and a new 7-speed automatic transmission on the 2.0 Z. The engines and drivetrain were unchanged.

This second-generation released under the slogan “smart multiplayer”, has significantly improved the car’s overall appeal.

The second-generation Wish is available in four trims, which are the base 1.8X, the sporty 1.8S, the upper-class 2.0G, and the top-end 2.0Z.

These engines are mated to either a 4-speed automatic transmission or a 7-speed Super CVT-i transmission which improves the car’s fuel efficiency by almost 15% compared to the previous model.

In the second quarter of 2012, a facelifted Wish was introduced. It featured several cosmetic changes that include a dashboard meter cluster, a revised front grille, new headlights, taillights with LED inserts, and a rear tailgate decoration.

The Wish is equipped with several standard safety features which include ABS (Antilock Braking System) with EBD (Electronic Brake Distribution) and BA (Braking Assistance). Optional features include Traction Control System (TCS) and Vehicle Stability Control (VSC). The Wish comes with front ventilated and rear disc brakes as standard except for the 1.8X 2WD which comes with rear drums.

The Wish was one of the most popular, if not the most popular MPV during its prime. Although time has passed and many new and advanced MPV’s have been released, but still, the wish is a desirable pick for some buyers. There are several reasons for buyers to opt for the wish rather than the other new and better options, but the most significant is Wish’s combination of reliability, low maintenance, and spaciousness. If a car offers you all this, what more can you ask for?

Storage-wise, the Wish comes with several small storage options for storing items such as keys, wallets, phones, and jewelry. On the doors, there are large door pockets with bottle holders that can handle a 1.5-liter bottle.

We hope this article will prove to be resourceful, and that it will simplify your decision-making if you are looking for an MPV or specifically looking for a Toyota Wish but not sure of which model to opt for.

Please visit BE FORWARD and check out our list of 300+ used Toyota Wish listed for sale.