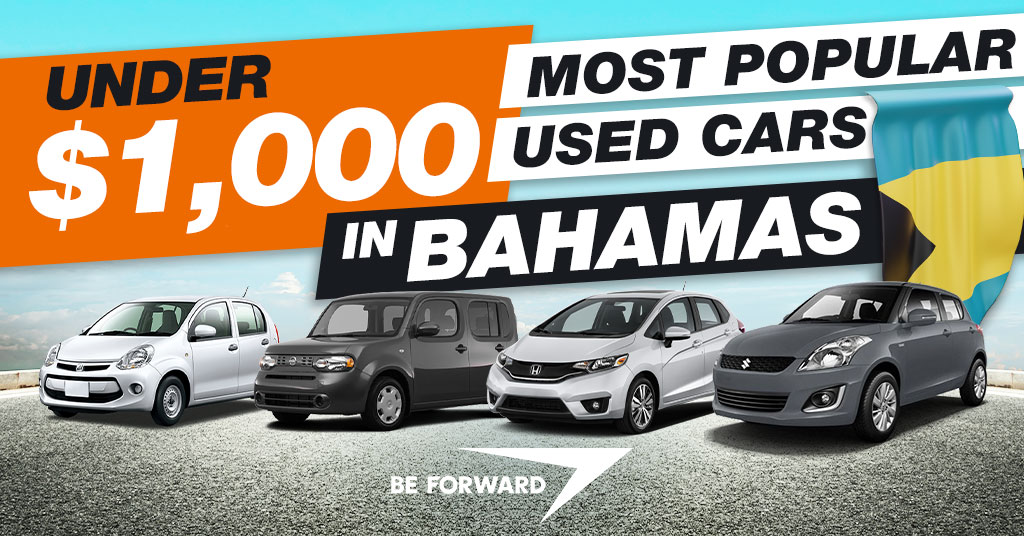 Japanese used cars are one of the most known and popular brands of cars in the
automotive market nowadays. It is now being imported globally due to its high demand and also because of the great qualities it offers. It is not just affordable but reliable, with a great powerful engine as well as performance, and fuel efficiency.

Now, let us take a look at the Most Popular Used Cars in Bahamas Under $1,000!

The Nissan Cube was first marketed in 1998 by Nissan and offered as a five-door subcompact hatchback with a four-wheel-drive / front-wheel-drive layout. It is available in three generations and is popular for its reliability, excellent fuel economy, and spacious interior with plenty of head and legroom. Also include some standard features like driver and passenger airbags, an anti-lock braking system, traction control, electronic brake-force distribution, vehicle dynamics control, brake assist, and air conditioning. The Nissan Cube is powered by a 1.5L HR15DE straight-4 engine with power 82 kW at 6000 rpm, and torque 148 Nm at 4000 rpm; a 1.8L MR18DE straight-4 petrol engine for North America models; and a 1.6L HR16DE straight-4 petrol engine as well as 1.5L K9K straight-4 dCi diesel engine for Europe models.

The Suzuki Swift is a three / five-door hatchback that was first introduced in 2004 by Suzuki and is one of the well-known models with sporty looking design, impressive fuel economy, and comfortable interior with enough head and legroom. It is presently in its third generation and equipped with some standard features including SRS airbags, air conditioning, an anti-locking braking system with electronic brake-force distribution, and power windows. The Suzuki Swift is powered by a 1.0L K10C Boosterjet straight-3 turbocharged petrol engine producing 101 hp–108 hp at 5500 rpm and a 1.2L K12B VVT straight-4 petrol engine producing 91 PS (67 kW) with CVT or five-speed/six-speed manual transmission.

The Nissan March was first marketed in 1982 by Nissan and is available in a three / five-door hatchback with a front-wheel-drive layout. It is presently in its fifth generation and is also referred to as the Nissan Micra with outstanding fuel efficiency, comfortable interior, impressive performance, and high reliability. It also comes with some advanced features including SRS airbags, power windows, power locks, power steering, air conditioning, tilt steering system, and an anti-lock braking system with electronic brake-force distribution. The Nissan March is equipped with petrol engines paired to a four-speed automatic, five-speed manual, or CVT: a 1.2L HR12DE straight-3 with 79 PS at 6000 rpm, 106 Nm at 4400 rpm; and a 1.5L HR15DE straight-4 with 116 PS at 6000 rpm, 156 Nm at 3600 rpm.

The Toyota Passo is a five-door hatchback with a front-wheel / four-wheel drivetrain that was first marketed in 2004 by Daihatsu as the Daihatsu Boon and is now in its third generation. It offers great fuel efficiency, reliability, practicality, and good performance. It comes equipped with some notable features like driver and passenger airbags, push-start buttons, air conditioning, an anti-lock braking system, electronic brake-force distribution, power windows, power steering, vehicle stability control, and rear camera assist. The Toyota Passo is powered by a 1L 1KR-FE straight-3 petrol engine with 51 kW at 6000 rpm, and a 1.3L 1NR-FE straight-4 petrol engine with 70 kW at 6000 rpm mated to a CVT, four-speed automatic, or five-speed manual transmission.

The Nissan Serena is available in a four / five-door minivan that was first marketed in 1991 by Nissan and is also known as the Suzuki Landy. It is now in its fifth generation with a spacious cabin and cargo area, great engine performance, and fuel efficiency. It is fitted with features like driver and passenger airbags, cruise control, hill start assist, vehicle dynamics control, traction control system, air conditioning, power steering, and brake assist. The Nissan Serena comes with a 2.0L MR20DD straight-4 petrol engine producing 129 hp at 5200 rpm, 187 Nm at 4800 rpm; and an S-Hybrid 2.0L MR20DD straight-4 petrol / MHEV engine with Xtronic CVT.

The Honda Stepwgn was first introduced in 1996 by Honda with a five-door mid-sized minivan body style and is now in its fifth generation. It is available in a four-wheel-drive / front-wheel drivetrain with impressive fuel economy, reliability, practicality, and exquisite design. The Stepwgn comes with some notable standard features like driver and passenger airbags, vehicle stability assist, emergency stop signal, traction control, hill start assist, Honda smart parking assist system, and Honda SENSING system. The Stepwgn is powered by a 1.5L VTEC straight-4 turbo engine producing power 150 PS at 5500 rpm, and torque 203 Nm at 1600-5000 rpm attached to a CVT transmission with a fuel economy of 17.0 km/L.

The Nissan Clipper is available in truck and van body layout which was originally known as Prince Clipper. In 2003, the Nissan Clipper van was reintroduced again as the NV100 offering a large cabin with decent head and legroom, spacious cargo area, great reliability, and outstanding fuel efficiency. It also comes with features including SRS airbags, high beam headlights, an anti-lock braking system, electronic brake-force distribution, air conditioning, power windows, power steering, and a hill-start assist system. The Clipper is powered by a 660cc R06A DOHC straight-3 engine with 48 hp at 6000 rpm, and a 660cc R06A turbo engine with 64 hp at 6000 rpm mated to a three-speed automatic or five-speed manual transmission.

Japanese used cars are always in excellent condition with high reliability, outstanding fuel economy, practicality, and affordability that some buyers are looking for. You can browse the BE FORWARD store to start looking for a car that will suit your taste.