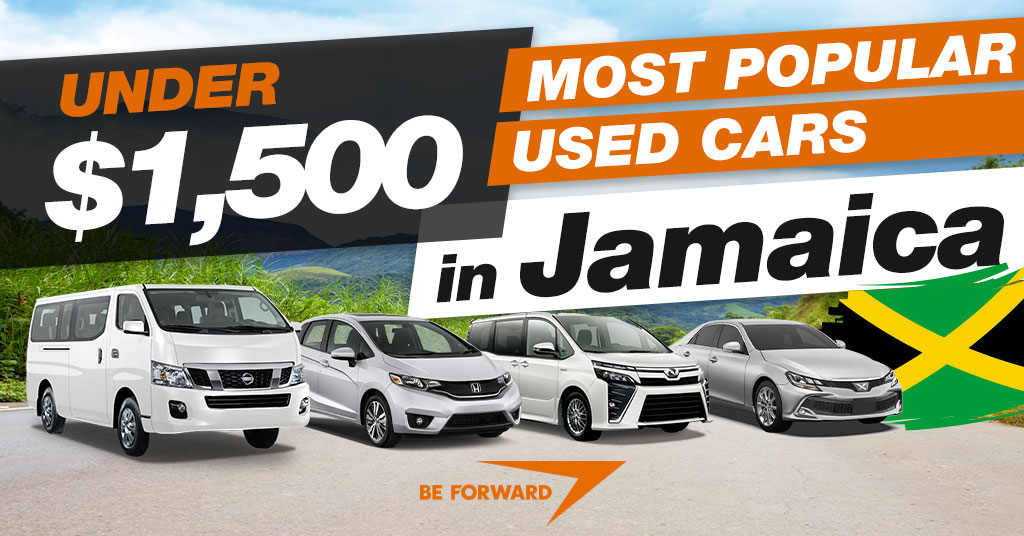 Whether it is used or brand new, Japanese-made cars are undoubtedly one of the most popular and best-selling models in the international automotive sector. They do not just offer great fuel efficiency, practicality, and reliability but also a budget-friendly price. Now, let us take a look at the Most Popular Used Cars in Jamaica Under $1,500.

The Toyota Voxy was introduced alongside the Toyota Noah in 2001 with a front-wheel / four-wheel-drive layout. It is a five-door minivan that can accommodate seven or eight passengers and is now in its third generation. The Voxy minivan comes with amazing features for the safety and convenience of the occupants which includes SRS airbags, the Toyota Safety Sense C with high beam assist, lane assist, and collision warning. Added with air conditioning, power windows, an anti-lock braking system, and Toyota’s T-Connect system with a 10-inch infotainment display, online services, and a rear parking camera. It is powered by a 2.0L 3ZR-FE straight-4 and 2.0L 3ZR-FAE Valvematic straight-4 engine with CVT producing 158 PS (116 kW).

The Isuzu Elf is a two/four-door medium truck available in a two-door standard cab, two-door crew cab, and four-door wide cab which was first produced in 1959 up to the present by Isuzu. It is also referred to as the Isuzu N Series in other international markets and is currently in its sixth generation. It is one of the best-selling trucks in the automotive market and is known for its reliability, high-quality, safety, and efficiency with standard features consisting of airbags, power steering, anti-lock braking system, power windows, power steering, and air conditioning. It is equipped with a 5.2L 4HK1-TCN turbo-intercooler diesel engine producing power of 114 kW (155 PS) at 2600 rpm, 419 Nm (42 kgm) at 1600 – 2600 rpm with a six-speed manual.

The Toyota Mark X is a four-door mid-size sedan first launched in 2004 with a four-wheel / rear-wheel drivetrain. It has been produced for two generations and is known for its reliability, performance, efficiency, and affordability. The Mark X is also equipped with impressive features which include driver and passenger airbags, autonomous emergency brake, pre-crash safety system, cruise control, electronically adjustable shock absorbers, lane departure warning, power steering, and an automatic self-parking system. It comes with 2.5L 4GR-FSE V6 generating power of 149 kW (200 hp) and 3.5L 2GR-FSE V6 generating power of 236 kW (316 hp) attached to a six-speed automatic or six-speed manual transmission.

The Nissan Caravan is a four or five-door light commercial van with a rear-wheel / four-wheel drive layout that was produced from 1973 up to the present and is currently in its sixth generation. It is also marketed as the Nissan Urvan or Nissan King Van in other international markets. The Nissan Caravan comes with numerous notable features including brake assist, keyless entry, an emergency city brake, power windows, and three-point seatbelts with emergency locking retractors. It is fitted with 2.0L QR20DE and 2.5L QR25DE straight 4 petrol engines producing power and torque 147 PS (108 kW), 213 Nm; and 2.5L YD25DDTi straight 4 with intercooler and turbo diesel engine producing power and torque of 129 PS (95 kW), 356 Nm attached to a five-speed automatic or five-speed manual gearbox.

The cars above are all in excellent condition with impressive reliability, efficiency, performance, and offer a fun and enjoyable driving experience at an affordable price. You can visit the BE FORWARD store for more affordable and available used cars.