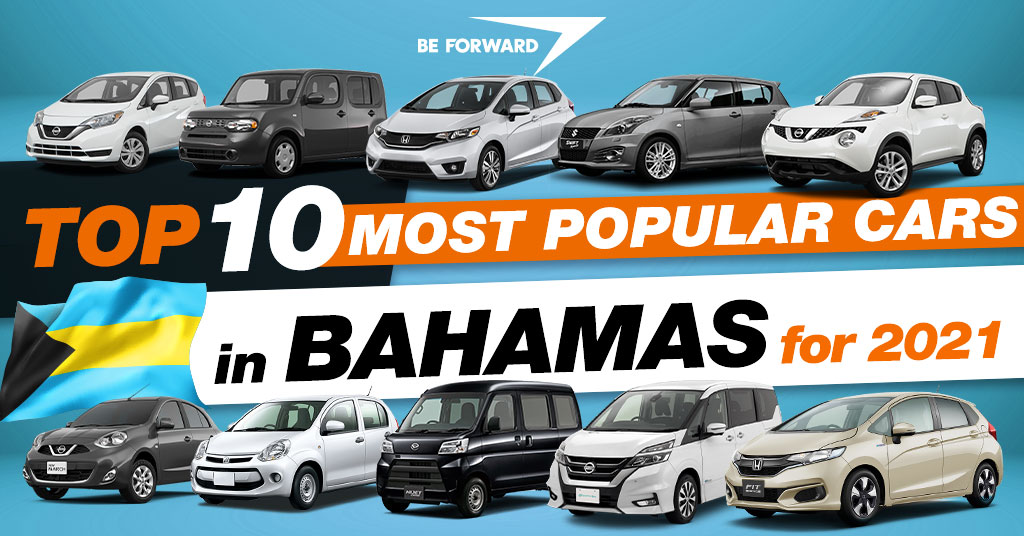 Because of the popularity of Japanese used cars globally, some countries import used vehicles from Japan. It is not just affordable but spacious, comfortable, durable, efficient, and powerful as well as can be used for any purpose. Let us take a look at the Top 10 Most Popular Cars In Bahamas for 2021.

The Nissan Note is a five-door mini MPV first introduced in 2004 with a four-wheel / front-wheel drivetrain and is now in its third generation. It was first sold in the Japanese and UK markets but also marketed in other international markets when the second generation was released. It offers a number of standard and safety features which include driver and passenger airbags, power windows, an anti-lock braking system, cruise control, climate control, and adjustable seats. It is equipped with a 1.2L HR12DE straight-3 engine producing 79 PS (58 kW) at 6000 rpm, 106 Nm (10.8 kgm) at 4400 rpm; and 1.2L HR12DDR straight-3 producing 98 PS (72 kW) at 5600 rpm, 142 Nm (14.5 kg⋅m) at 4400 rpm with a five-speed manual or Xtronic CVT.

The Nissan Cube is a five-door, four-wheel / front-wheel-drive subcompact hatchback released in 1998 which was solely aimed at the Japanese market. It was produced for three generations and is known for its reliability, unique design, spacious cabin, and fuel efficiency. It is also equipped with some impressive features including vehicle dynamics control, side-impact bar, traction control, an anti-lock braking system, electronic brake-force distribution, brake assist, centralized door locks, power windows, and rear wiper. The Nissan Cube is powered by a five-speed / six-speed manual or CVT gearbox with 1.5L HR15DE four-cylinder producing111 PS (82 kW) at 6000 rpm, 148 Nm (15.1 kgm) at 4000 rpm. The 1.5L K9K diesel engine and a 1.6L HR16DE gasoline engine are used in Europe while the 1.8L MR18DE four-cylinder gasoline engine is used in North America.

The Honda Fit is a five-door hatchback also known as the Honda Jazz in other markets which were first marketed and manufactured in 2001 by Honda. It is available on a four-wheel / front-wheel drive configuration with four generations and features some advanced systems for the convenience of the occupants like the SRS airbags, traction control, hill start assist function, vehicle stability control, brake assist, an anti-lock braking system, electronic brake-force distribution, air conditioning, power windows, and seat belt with pretensioners. The Honda Fit comes with a 1.3L L13B DOHC i-VTEC engine producing 73 kW (100 PS), 119 Nm (12.1 kgm); and a 1.5L L15B DOHC i-VTEC engine producing 97 kW (132 PS), 155 Nm (15.8 kgm) powered through CVT, five-speed, or six-speed manual gearbox.

The Nissan Juke is a five-door subcompact crossover SUV marketed and manufactured in 2010 by Nissan and is currently in its second generation. It is available in a front-wheel /all-wheel-drive layout with a unique design, spacious and comfortable cabin, and some innovative features for the safety and convenience of the driver and passengers. It includes SRS airbags, a seat belt with pretensioners and force limiters, an anti-lock braking system, traction control, vehicle stability control, brake assist, automatic air conditioning, and a split-folding rear seat. The Nissan Juke is equipped with a 1.5L HR15DE straight-4 petrol engine producing 114 PS (84 kW) at 6000 rpm, 150 Nm (15.3 kgm) at 4000 rpm; and a 1.6L MR16DDT straight-4 turbo-petrol engine producing 190 PS (140 kW) at 5600 rpm, 240 Nm (24.5 kgm) at 2000-5200 rpm with CVT or five-speed/six-speed manual.

The Nissan Serena is a four and five-door minivan also known as the Suzuki Landy in other markets which were first released in 1991 and are now in its five generations. It is available in a four-wheel / front-wheel drivetrain with outstanding reliability, practicality, and efficiency. It also comes with numerous standard features including SRS airbags, cruise control, traction control system, vehicle dynamics control, hill start assist system, brake assist, anti-lock braking system, electronic brake-force distribution system, air conditioning, and power windows. It is equipped with a 2.0L MR20DD straight-4 direct-injection petrol engine producing 94.9 kW (129 hp) at 5200 rpm, 187 Nm (138 lb-ft) at 4800 rpm; and a 2.0L MR20DD straight-4 direct-injection MHEV S-Hybrid engine coupled with Xtronic CVT.

The reliability, comfortability, efficiency, performance, and affordability that the Japanese used cars offer are the many attributes why it is so popular and top-selling worldwide. No one can argue that lots of customers chose to buy these cars because of their great features and qualities. You can visit the BE FORWARD store for more available and budget-friendly used cars.