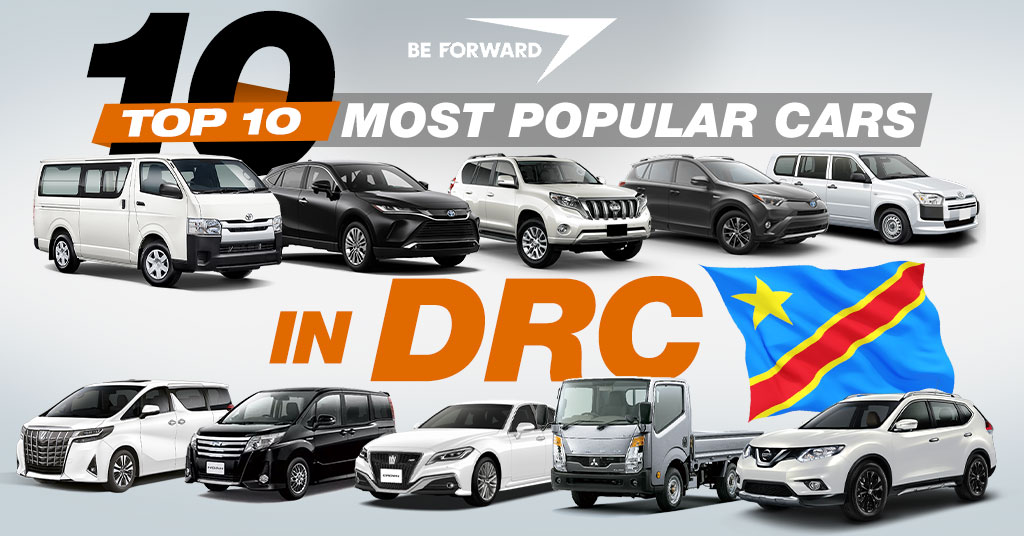 The increasing popularity of used cars is rapidly growing due to the pandemic, it is not just because there is a slow production in the latest models but also the affordability it offers along with its excellent condition and reliability. So it’s not a surprise if it becomes highly in demand in the following years.

Now, let us talk about the Top 10 Most Popular Cars in DRC.

The Toyota Harrier is available in a compact mid-size crossover SUV that was first marketed in 1997 up to the present by Toyota. It has a front-engine, front-wheel-drive / front-engine, four-wheel-drive layout with some advanced features like SRS airbags, an anti-lock braking system, power steering, and Toyota’s Pre-Collision System with a pre-collision system, lane departure assist, automatic high beam, and adaptive cruise control. The Toyota Harrier is equipped with a 2.0L 3ZR-FAE straight-4 petrol engine with 149 hp at 6100 rpm, and torque 193 Nm at 3800 rpm powered by Super CVT-i with 7-speed simulation; and a 2.5L 2AR-FXE straight-4 engine for a hybrid model with eCVT transmission.

The Toyota Land Cruiser Prado SUV is available in three and five-door layout with a four-wheel-drivetrain that was first introduced in 1990 by Toyota. It is known for its impressive reliability, spacious cabin and cargo space as well as its off-road capabilities, and fuel efficiency. It also offers standard features including SRS airbags, side airbags, anti-lock braking system, electronic brake-force distribution, traction control, automatic air-conditioning, power steering, power windows, power door locks, brake assist, and front fog lights. The Toyota Land Cruiser Prado comes fitted with a 2.7L 2TR-FE straight-4 petrol engine with 163 PS at 5200 rpm, and a 4.0L 1GR-FE V6 petrol engine with 276 PS at 5600 rpm powered by a four-speed or five-speed automatic transmission.

The Toyota Probox is a five-door van and wagon that was first produced in 2002 by Toyota with a front-wheel / four-wheel drivetrain. It comes fitted with standard features which include SRS airbags, an anti-lock braking system, brake assist, vehicle stability control, traction control, power mirrors, power windows, power steering, and air conditioning. The Toyota Probox is powered by a 1.5L 1NZ-FE straight-4 petrol engine with 80 kW at 6000 rpm, and a 1.3L 1NR-FE straight-4 petrol engine with 70 kW at 6000 rpm attached to a four-speed automatic or CVT transmission.

The Toyota Alphard minivan was first introduced in 2002 with a five-door layout and can accommodate eight passengers. It is available in a front-wheel / four-wheel-drivetrain and is currently in its third generation which offers plenty of features, functions, great fuel efficiency, and reliability. It includes features like SRS airbags, climate control, smart entry and push start system, cruise control, power door locks, power steering, power windows, and air conditioning. The Toyota Alphard comes with a 2.5L 2AR-FE straight-4 petrol engine with 182 PS at 6000 rpm, and a 3.5L 2GR-FE V6 petrol engine with 280 PS at 6200 rpm mated to a CVT and six-speed ATF U660E automatic gearbox.

The Toyota Noah is available in a five-door minivan with a front-wheel / four-wheel drive layout that was first released in November 2001. It can accommodate seven / eight passengers with enough head and legroom which is fit to use for business purposes or family use. It also includes features like automatic high beams, power windows, power steering, power door locks, sliding doors, an anti-lock braking system, and Noah Panoramic Live Sound System with eight speakers as well as a 10-inch infotainment display. The Toyota Noah comes fitted with a 2.0L 3ZR-FAE Valvematic straight-4 petrol engine with 152 PS (112 kW), and a 1.8L 2ZR-FXE straight-4 petrol hybrid engine powered by a 5JM AC synchronous motor and e-CVT.

The Mitsubishi Fuso Canter is a two-door light-duty commercial truck with an all-wheel-drive layout that was first produced in 1963 by Mitsubishi Fuso Truck and Bus Corporation and is now in its eighth generation. It comes with standard features including driver and passenger airbags, Xenon headlights, air conditioning, an anti-lock braking system with electronic brake-force distribution, and a brake override system. The Canter truck comes with 3.0L 4P10-T2 with 96 kW at 3500 rpm, 3.0L 4P10-T4 with 110 kW at 2840 – 3500 rpm, and 3.0L 4P10-T6 with 129 kW at 2860 – 3500 rpm powered by a six-speed Duonic dual-clutch transmission or a five-speed manual transmission.

Used cars are often always in a good condition before they sell to the market and with good features, qualities, and affordability, it becomes popular among buyers. Though it doesn’t have the latest features or lack certain systems, it is still known as one of the in-demand products in the automotive sector. For more information please visit the BE FORWARD store.